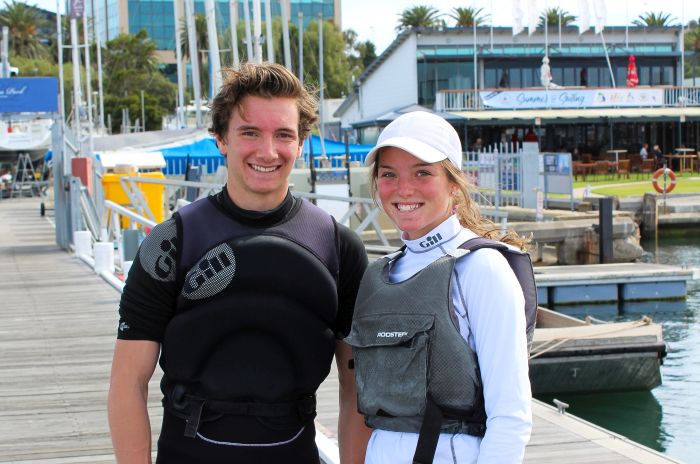 The country’s top junior sailors will compete in Geelong later this month, when the Royal Geelong Yacht Club hosts the Cadet Class Australian Championship. One hundred and twelve sailors on 56 International Cadet Class boats are entered in the championships which will run from December 27, 2019 to January 4, 2020.

Competitors are aged up to 18 and will include local Geelong sailors as well registered crews from across Victoria, Tasmania, New South Wales and South Australia.

This will be the third time the Cadet Nationals have been held in Geelong, with the RGYC also hosting them in the summer of 1998/1999 and 2007.

RGYC sailors Jarrah Harris-Moore and Elliot Hughes are among a strong contingent of local sailors who will compete in the regatta. Both young sailors represented Australia at the World Cadet Class Championships in Poland earlier this year and are involved in the Barwon Sports Academy (BSA) which supports the development of aspiring athletes.

Hughes, 14, said he had his dad to thank for getting him into sailing. “One day we were out cruising on our boat in the Gippsland Lakes and saw some Tackers (young sailors aged seven to 12) kids out sailing and I thought I would like to have a go at it. It just evolved from there. I started the Tackers program five years ago and have been sailing Cadets ever since.”

Following the Nationals, Hughes will move into sailing 29ers and compete in the 2020 Australian 29er Championships on the Mornington Peninsula, from January 3 to 8, 2020.

“This is my last (Cadet) Nationals so I am looking forward to catching up with all of my mates who are interstate and race them for the last time in the Cadet Class.

“What I love about the sport is that it’s very diverse. You can go from cruising around the world in a 40ft boat to foiling across the top of the water in a Moth and doing 30 knots. There is a boat to accommodate all levels of skills and ages.”

Following the Cadet Nationals, Hughes and Harris-Moore will get to join the crew on-board a TP52, which is the ‘grand prix’ division of hi-tech racing yachts with mainly professional crews, during the MacGlide Festival of Sails, which runs from January 25 to 27, 2020. This will give them valuable sailing experience in a major regatta and the chance to see how the professional crews operate.

Harris-Moore, 16, said the MacGlide Festival of Sails was her “favourite regatta of the year”.

“It’s such a great atmosphere and so good to have everybody at the club all interested in the same thing.”

Going into her fifth season of racing Cadets, she said she was really looking forward to the Cadet Nationals being in Geelong and having the local knowledge of the area and different sailing conditions. “Having a Nationals in your home town is an amazing opportunity,” she said.

“For the younger sailors, seeing or competing against the best sailors can often be the inspiration they need to make the decision to stay involved in the sport of sailing. This club has a very good track record of producing championship sailors – a record we would like to see continue,” Peter said.