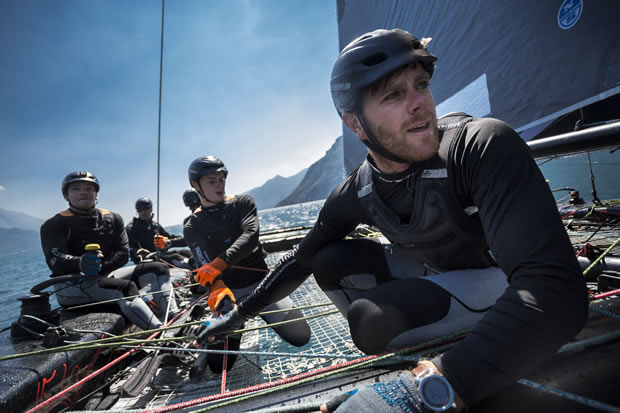 The 2016 GC32 Racing Tour gets underway later this week with the first of two regattas on one of the world’s most magnificent regatta venues, Lake Garda. The GC32 Riva Cup will take place over Thursday 23rd May until Sunday 26th May, from the Fraglia Vela Riva in Riva del Garda, on the Italian lake’s northernmost corner.

In addition to its natural beauty, nestled within the Italian Alps, Lake Garda is renowned for its exceptional wind conditions and flat water. The venue was chosen by the GC32 Racing Tour as this combination is perfect for teams to get maximum performance from their foiling one design catamarans.

ARMIN STROM Sailing Team skipper Flavio Marazzi explains: “Normally in the afternoon you get a nice thermal breeze from the south – especially now when it has recently snowed and there is a big difference in temperature. So it should be 12-18 knots.

“It could be quite hard for the new teams as this will be on the windiest part of the lake. But that is all part of the game and in fact the more breeze there is, the longer the courses we can have, which makes it easier to manoeuvre.”

Nine world-class teams will be competing in Riva del Garda.

Back for a fourth year on the circuit, Marazzi’s team this season features New Zealand Olympic and round the world sailor Sharon Ferris, the sole woman on the circuit. This season ARMIN STROM Sailing Team will benefit from competing on board a new boat.

Also back again are two teams from France – Yann Guichard and Dona Bertarelli’s Spindrift racing, on which Guichard steers. Spindrift is competing on three different inshore catamaran circuits this season so they will be certainly race-ready come Thursday.

Similarly Sébastien Rogues’ Team ENGIE has been training hard over the winter and this year has in its crew Gurvan Bontemps, one of France’s most talented F18 and foiling catamaran sailors. Rogues says he is looking forward to racing on Lake Garda – as a highly accomplished offshore sailor, he is the only one of his crew who hasn’t raced there before!

Team Orange is the new team of GC32 Founder Laurent Lenne. The Amsterdam-based Frenchman returns to the circuit having campaigned SPAX Solutions during the first two seasons of the GC32 Racing Tour.

>From the USA is ARGO, skippered by two time Melges 32 World Champion, Jason Carroll. Having dipped its toe in the circuit last season in Cowes, Jason Carroll’s team will be competing on the GC32 Racing Tour this season with a crew that includes talented American Moth and keelboat sailor Anthony Kotoun. For Riva, ARGO is bringing on hardcore cat talent in ex-Luna Rossa sailor Alister Richardson and leading Antipodean sailor Ed Smyth.

According to the ARGO team's Chad Corning: “We did a lot of training last autumn when the boat got back to the States and we’re doing four of five days prior to the upcoming event.”

New for this season is another French team, NORAUTO, recent winner of the GC32 Alps Challenge Traunsee in Austria. For Riva, leading French skipper Franck Cammas will be reclaiming the helm. NORAUTO has been two boat training on board GC32 for several months now and is likely to be the ‘boat to beat’ this week.

Another stand-out team will be Gunvor. Backed by Torbjörn Törnqvist’s Geneva-headquartered company, the team will be working a crew rotation throughout this year including Nathan Outteridge, who will be helming for Riva del Garda, plus British double Olympic gold medallist Iain Percy, Luke Parkinson and Christian Kamp plus some young Swedish talent the team is nurturing.

Gustav Petterson, skipper of Gunvor Racing comments: “It’s great to have Nathan Outteridge steering for us in Garda.  There will be a rotation of the squad at each event this season, with young Swedish sailors being mentored by some of the best sailors in the world. I’m very proud to be part of this programme and I’m sure it will have a big impact on both Olympic and professional sailing in Sweden.”

GC32 Racing Tour Manager Christian Scherrer summarises: “I am very pleased that we have will have so many boats on the start line this season. This marks a new chapter for the GC32 Racing Tour. There are good teams, professional teams and good amateur teams, and now we have a chance for the amateur drivers to race against them.”

The GC32 Racing Tour has been set up to provide foiling catamaran racing in the best locations, this year including Lake Garda, Palma and Marseille, on courses, and with the best chance of conditions, to allow crews to foil their GC32s and get the most from these lightning-quick catamarans. These features also make the circuit well suited to experienced owner-drivers.

As a result, and as a first for this 2016 season, the GC32 Racing Tour will run an owner-driver ranking in addition to its main overall leaderboard. This ranking is open to GC32 teams with a World Sailing Group 1 amateur helm.