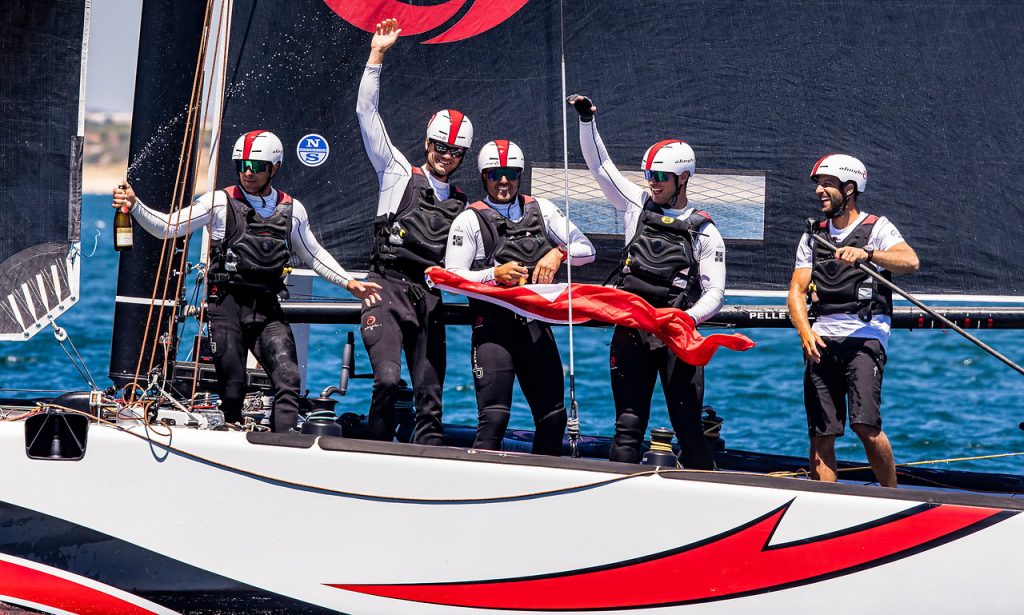 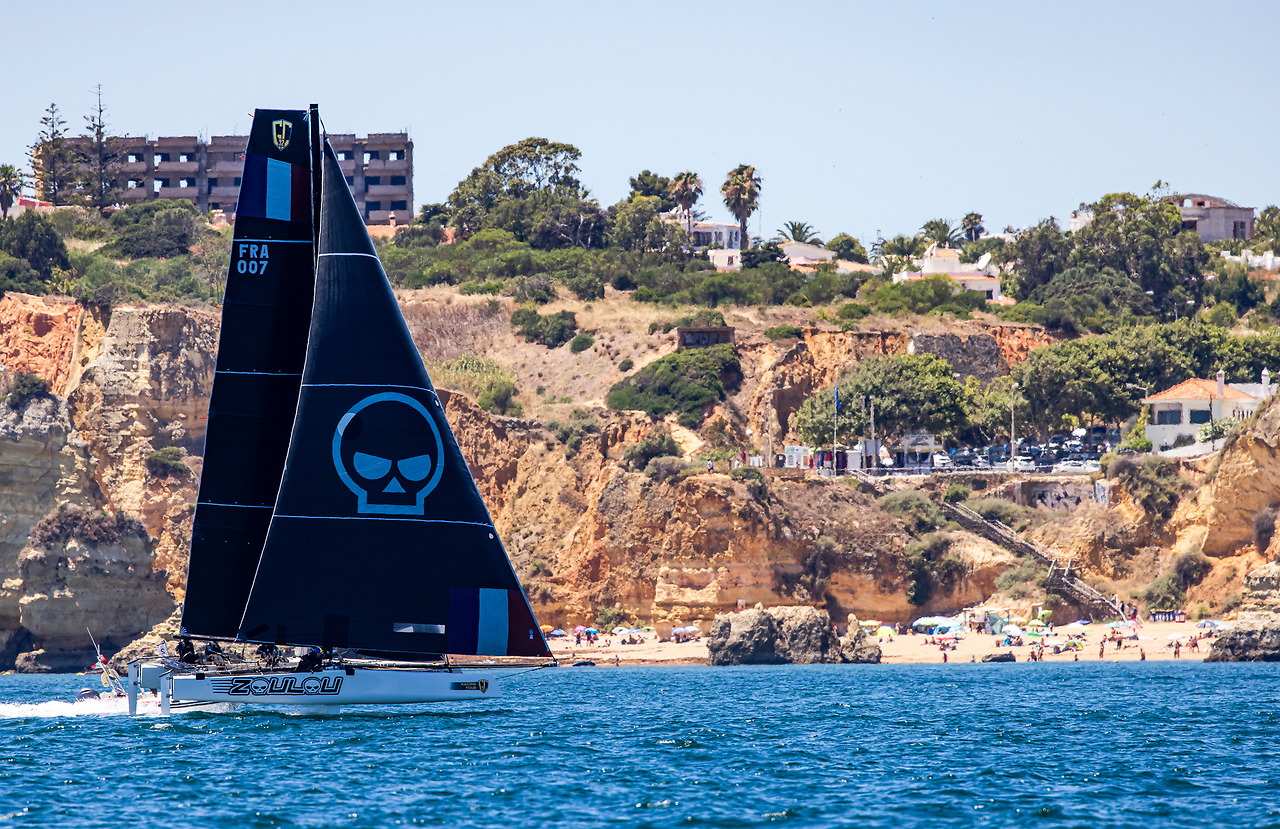 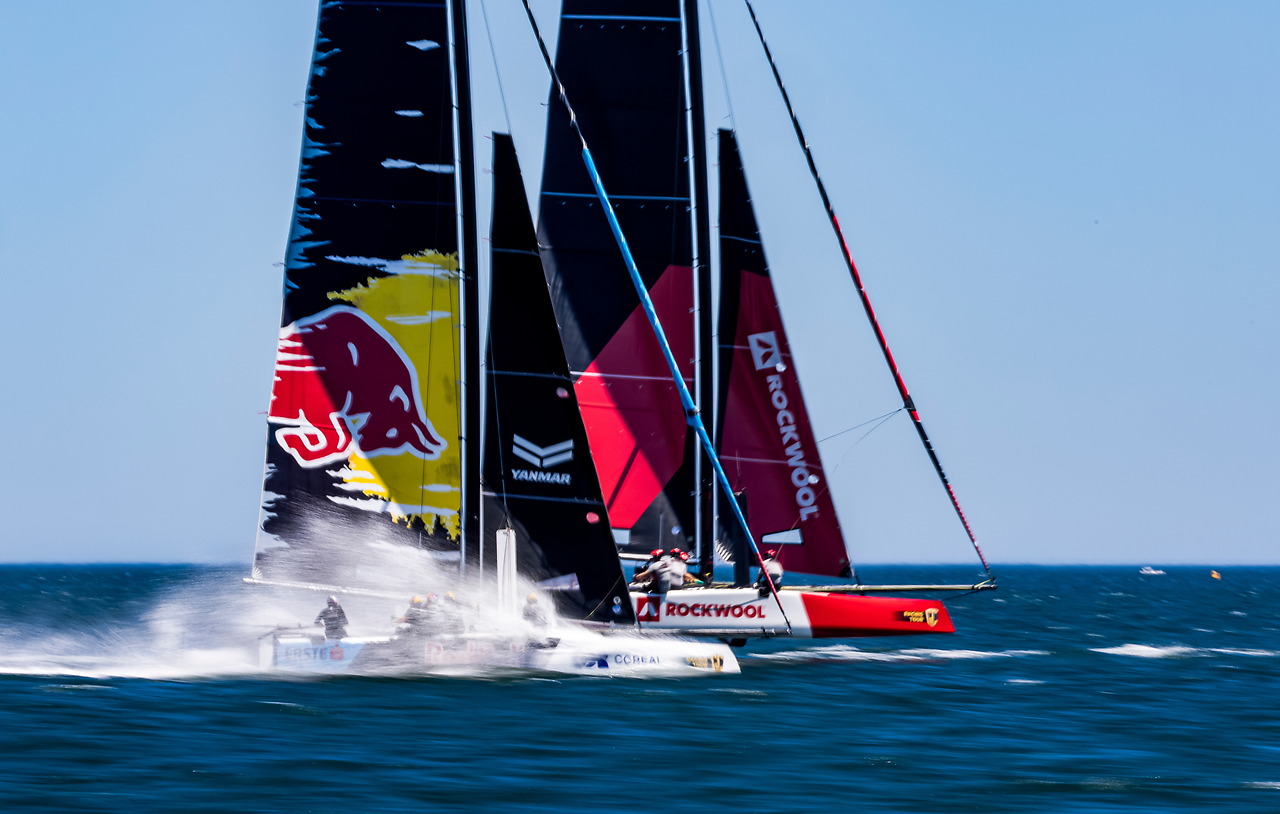 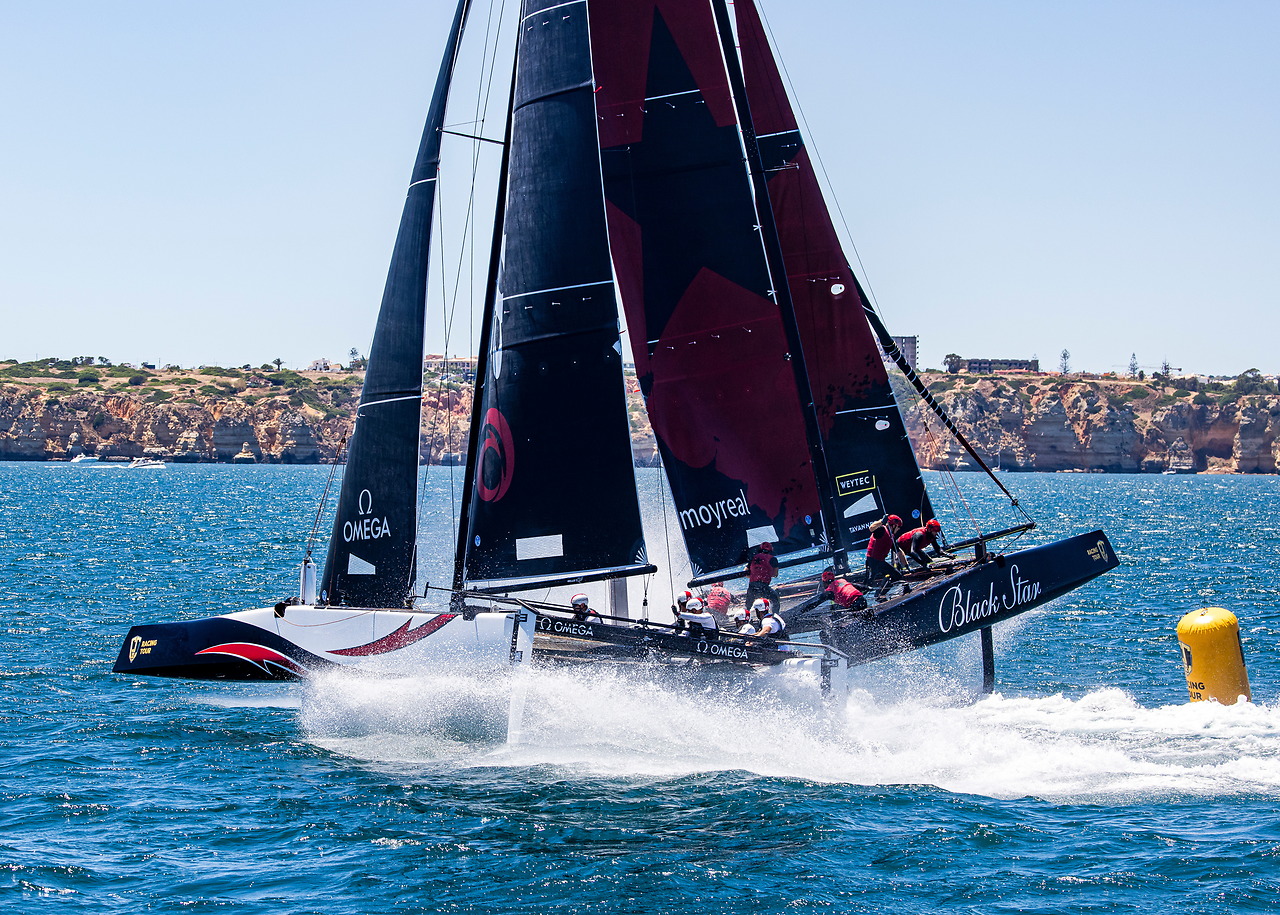 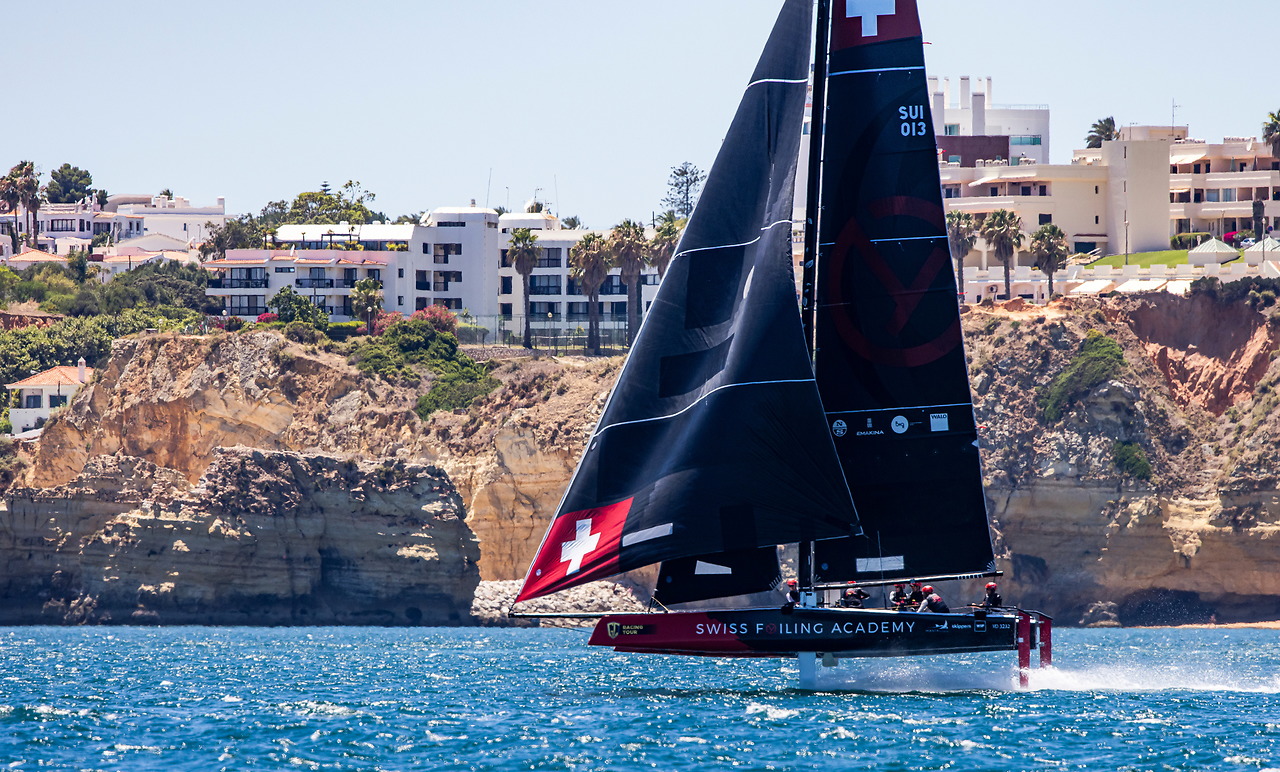 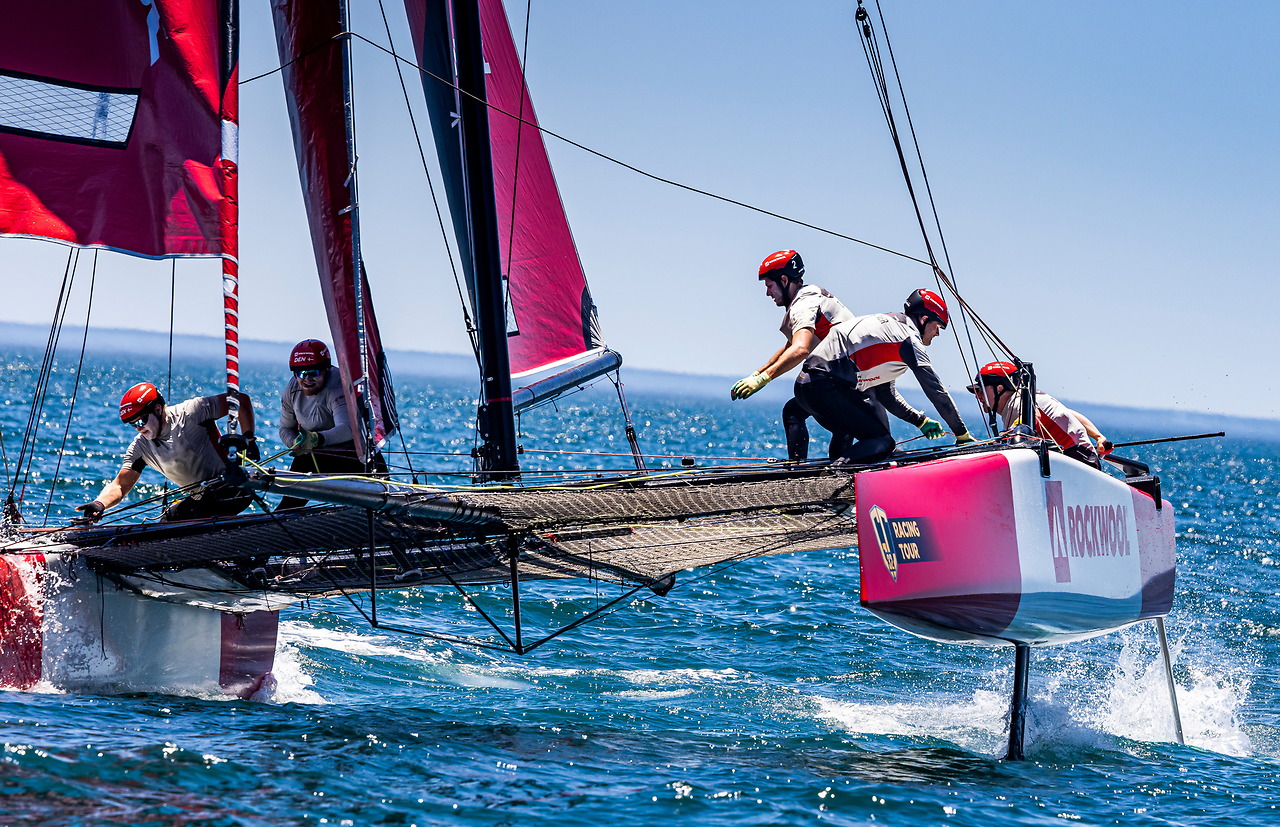 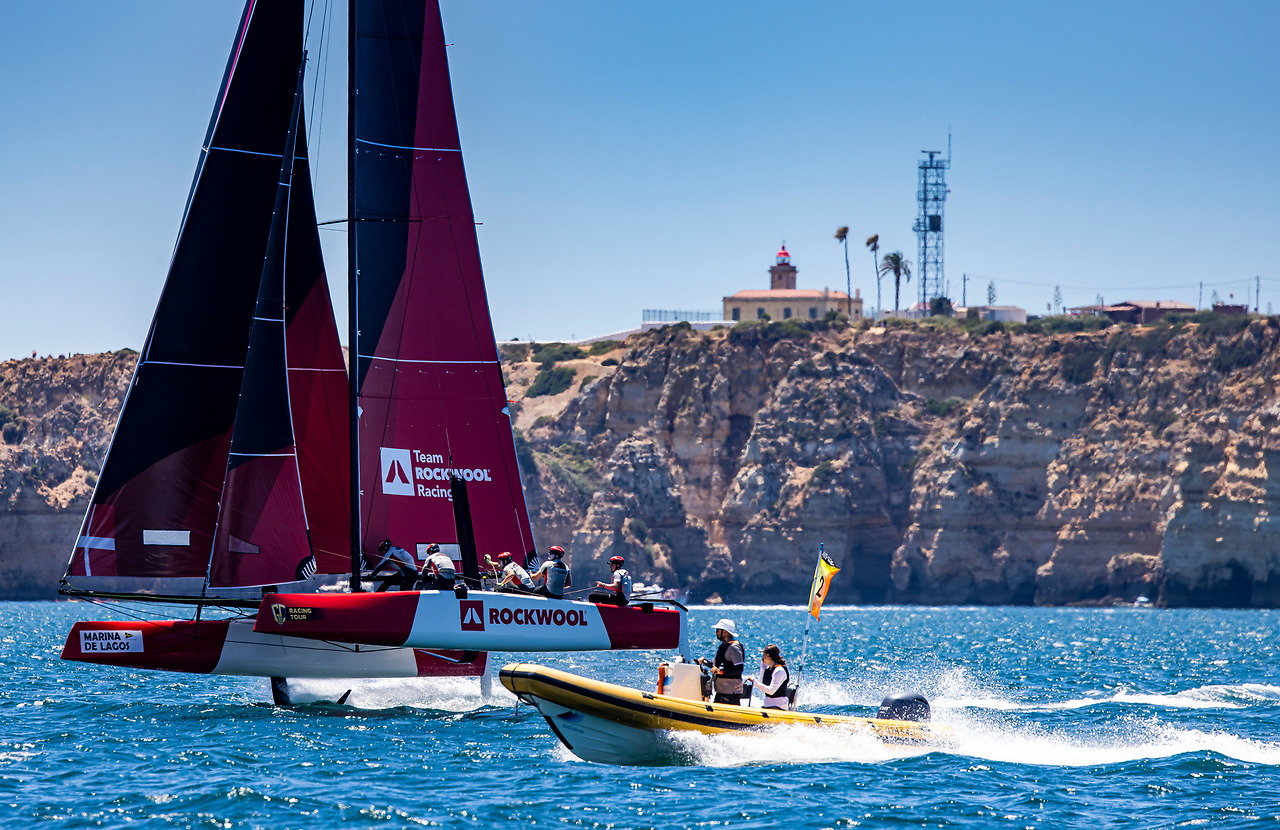 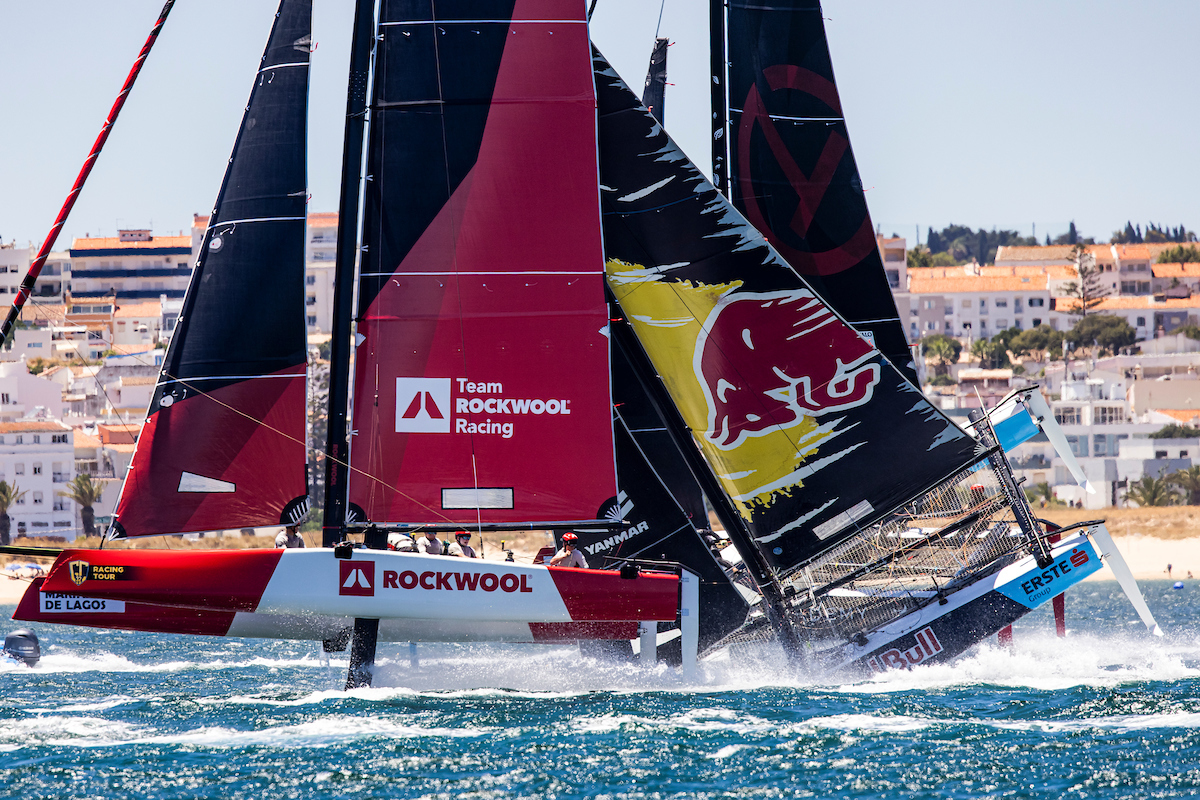 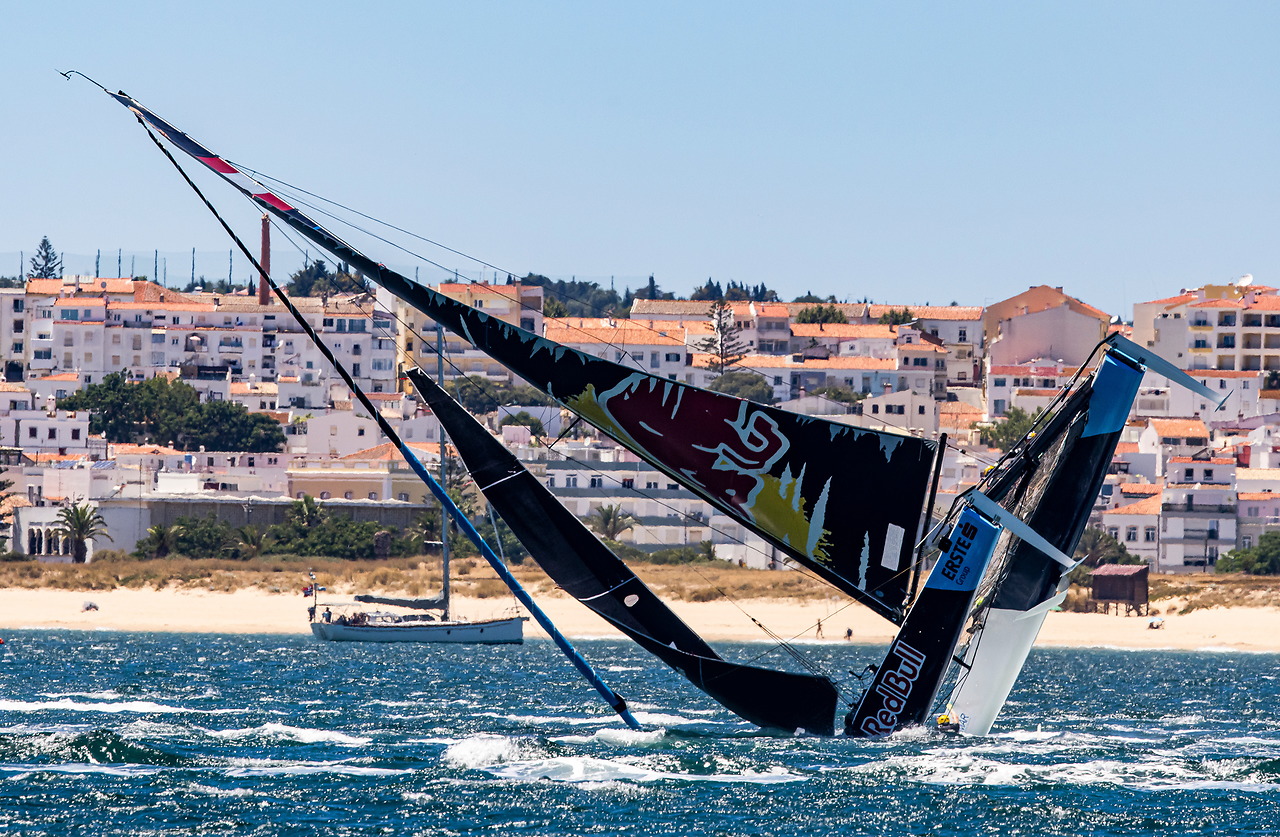 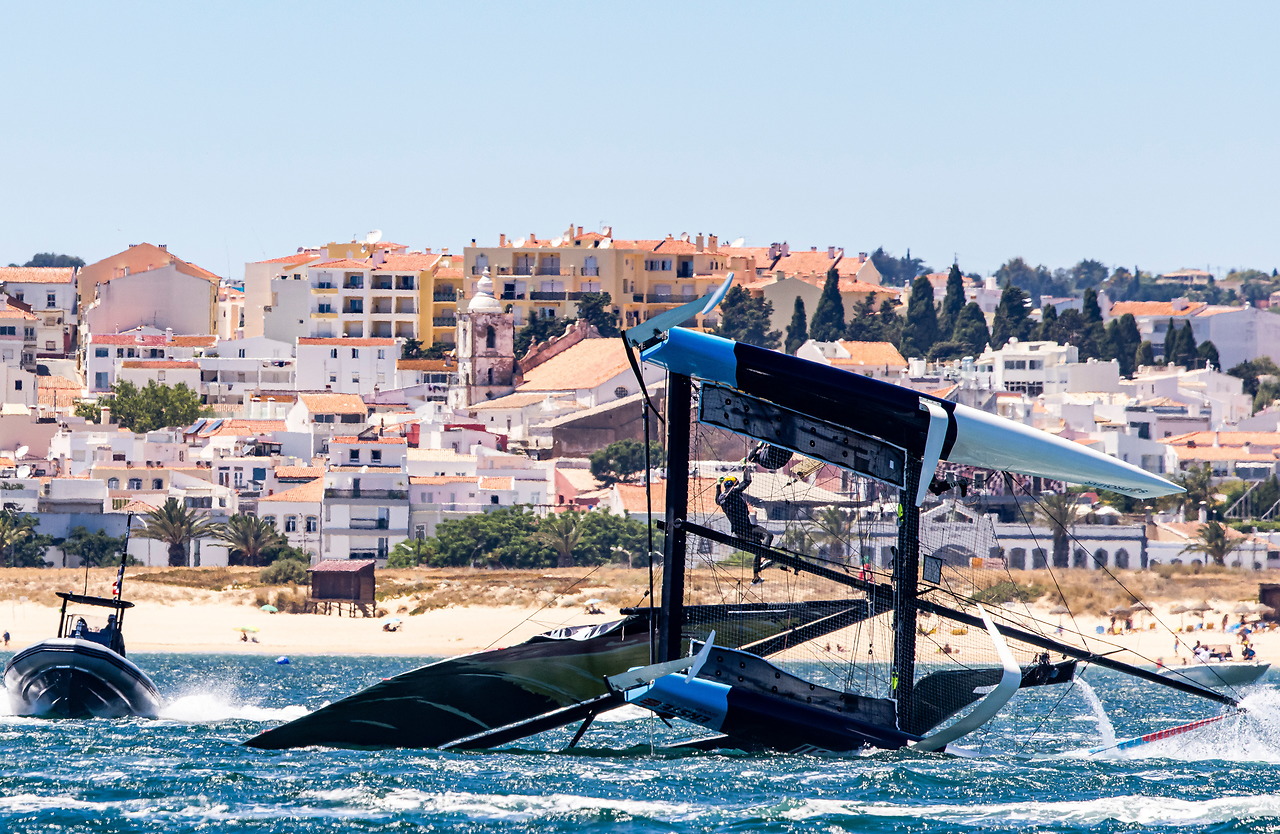 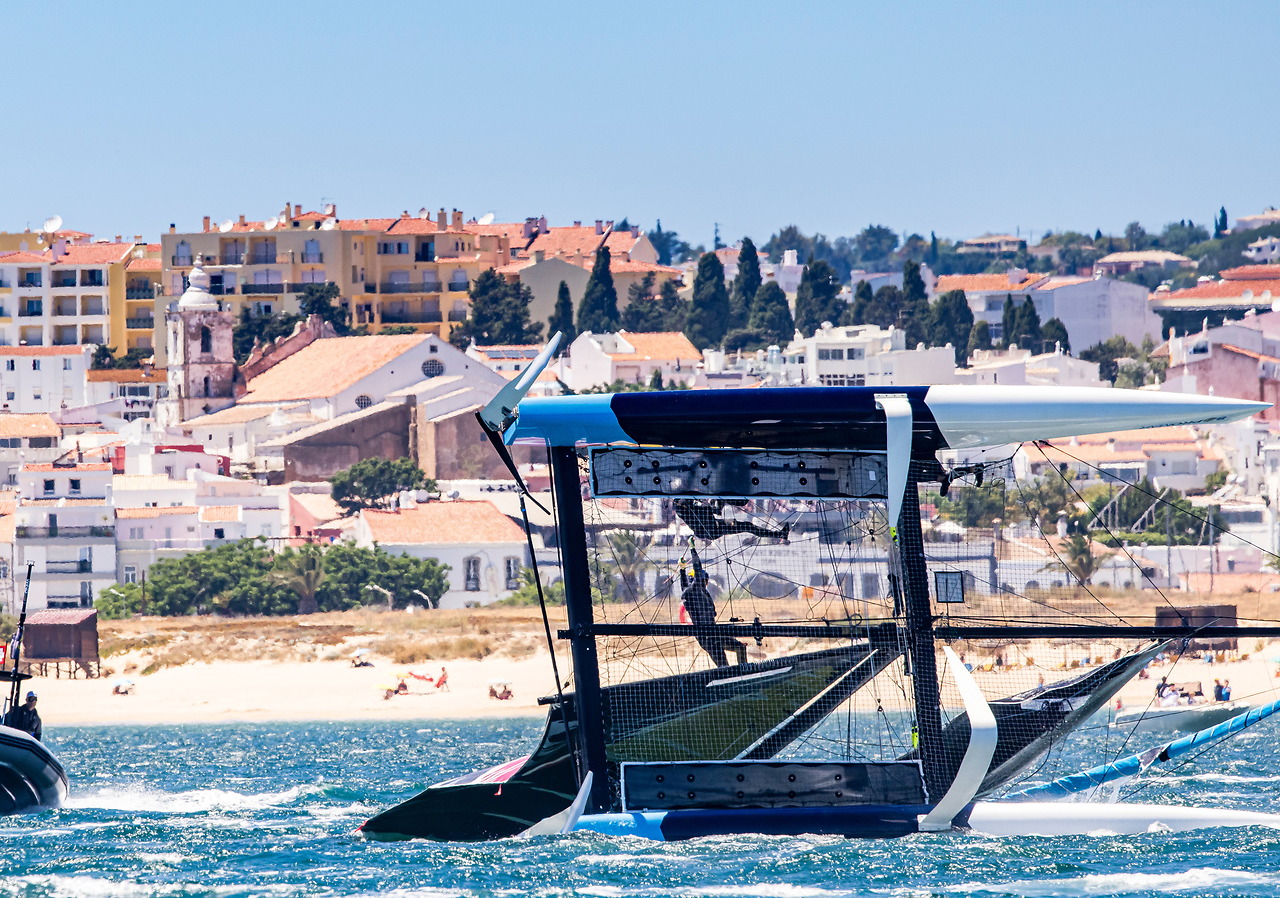 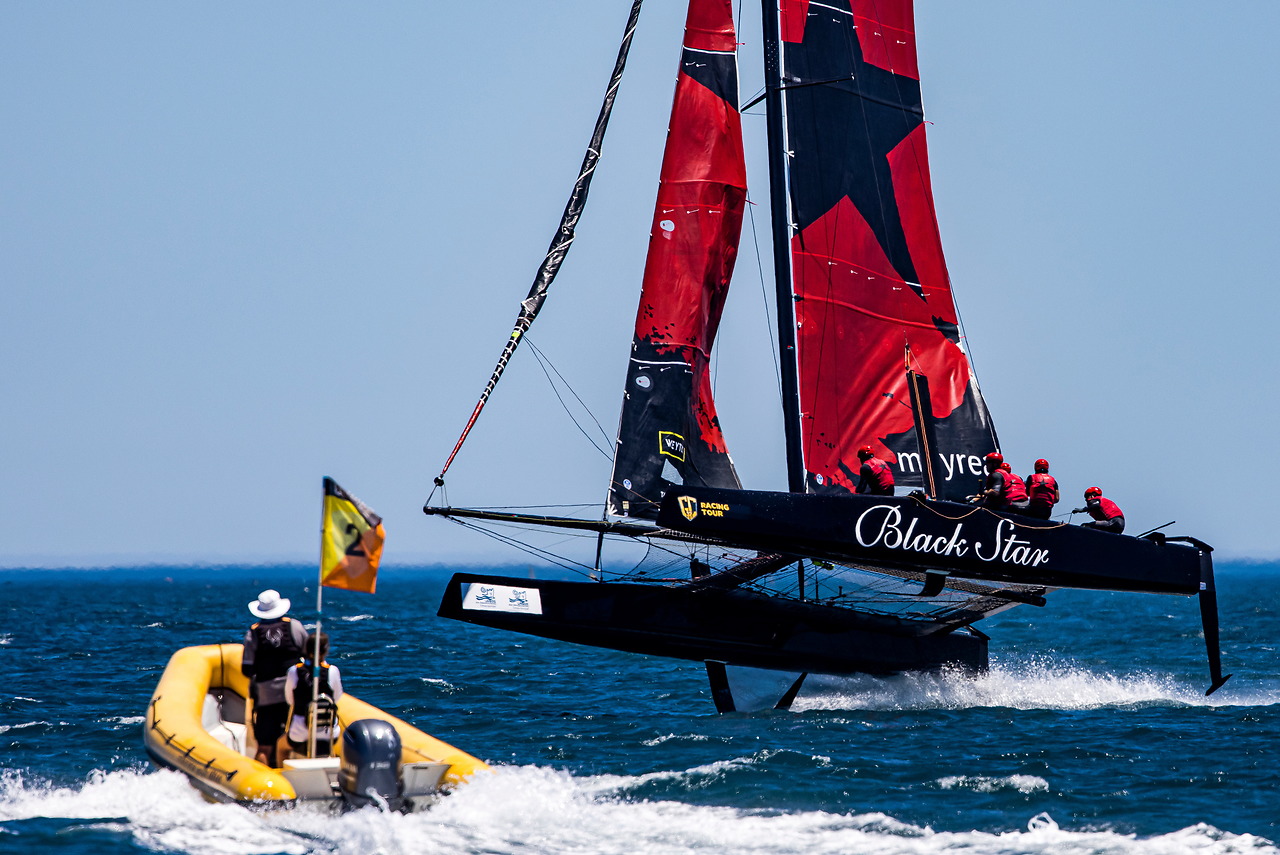 Alinghi has won the GC32 Lagos Cup 1 after a dominant final day in strong breeze and dramatic conditions. With the wind gusting close to 25 knots and sometimes arriving with little warning, Red Bull Sailing Team was caught out and nosedived alarmingly, resulting in a capsize.

End of Race 16 for Roman Hagara and the Austrian crew. But could they get the boat upright and ready for the final two heats? Yes, they could, and not only that but scored a 3rd and 2nd in the last two races of Lagos, enough for Austria to hold on to second place overall by just three points from Team Rockwool Racing from Denmark.

Hagara, the double Olympic Champion, has seen a lot in his long and glittering career, but his passion for high-octane racing burns as brightly as ever. “What a day! After the capsize we still finished the event in second, full on! Capsizing – it’s part of racing, we’ve had this before in other events. As soon as it happened we checked that everyone was OK, and there was no real damage anywhere, just broke the wind indicator at the top of the mast, and we were ready for the next race.”

The breeze has been very shifty in Lagos over the past four days and the sailors have loved the unpredictability of the race course and the opportunities it creates. The first race of the day took place in light winds and while Alinghi started as she meant to go on, with a race win, it was the only owner-driver at this event, Erik Maris, who steered Zoulou to second place. Maris is looking forward to being joined by more owner-drivers at other events this season, but against such professional opposition he acquitted himself well.

Team Rockwool Racing started slowly with a fifth but as the breeze built the Danes got stronger, finishing off the day with a 2nd and 3rd place. Tantalisingly close to beating Red Bull, but still making the podium at Nicolai Sehested’s first attempt, and edging out Black Star Sailing Team from Switzerland by a single point.

Christian Zuerrer’s crew on Black Star Sailing Team put it all on the line in the final race, taking the winner’s gun, which made up for any disappointment about so narrowly missing the podium. “It was an absolutely great day, such amazing racing, and the level in this class is so high. Everyone is competitive, we were a little unlucky and didn’t sail well enough to beat the other guys, but we have another chance here in three weeks’ time at the next event. We can’t wait! The past four days have been perfect, the race committee and organisation did a great job, really thankful to be here and happy to be coming back here again very soon.”

Swiss Foiling Academy became stronger the harder the wind blew, scoring their best run of results in the final three races with 3rd, 4th, 4th. Team member Loic Forestier commented: “We’re very happy because the crew are a mixed team with two girls on board. With a mixed crew and a number of young sailors involved, we have a really good team spirit, a sense of family.”

Helmsman Julien Monnier added: “The GC32 is such a hard, physical boat, initially we didn’t know the best way of involving the two girls and organising the crew in their positions. But step by step we have found a way of making the positions work, very grateful to have the two girls on board. We return to the next event with pretty much the same team. This has been a fantastic experience with the other teams, to be here in Lagos racing these amazing boats.”

Arnaud Psarofaghis was delighted to be back racing after so long away from competition. “We really like Lagos, some really great wind today. I hope we can have the same conditions here again in a few weeks’ time. I think the other guys are improving a lot and that will make it hard for us to stay on top. The final scoreboard doesn’t really show how hard we had to fight in nearly every race.”

The next event on the GC32 Racing Tour is the GC32 Lagos Cup 2, which takes place from 28 July to 1 August, and every team is looking forward to the return match in this sensational sailing venue.