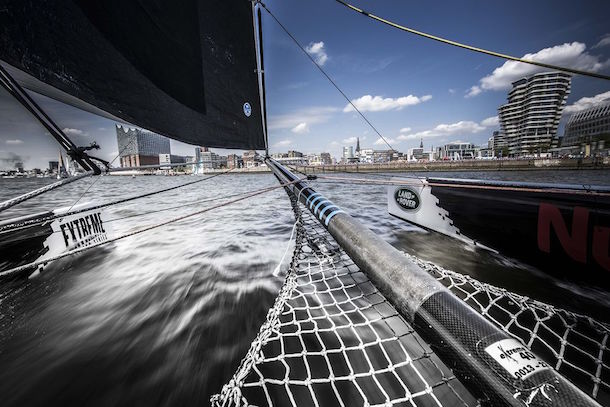 On board an Extreme 40 in Hamburg. Photo Jesus Renedo / OC Sport.

Another outstanding performance by Gazprom Team Russia on day two of the Extreme Sailing Series™ Act 5, Hamburg presented by Land Rover, as they posted four second place results and one race win. Following their impressive opening day off the HafenCity waterfront, they now leapfrog Extreme 40 heavy weights SAP Extreme Sailing Team and The Wave, Muscat to take the lead on 111 points.

After racing, a calm and collected helm Phil Robertson explained that good communication among the crew was the key to their success: “It is so much better and that’s the biggest thing we are working on. It just helps when the wind is light, it gives us more time to talk which means more time to translate from the Kiwi to Russian.”

A testing day on the River Elbe, a patchy 4-9 knot breeze but strong tides and regular brakes for passing commercial traffic interrupted the flow of racing. The result, a game of snakes and ladders for the teams that didn’t allow them to lose focus for a moment: “It was tricky today, the name of the game was to be as flexible as possible, and adapt to the changing conditions and the other boats,” said helm of Team Turx powered by Kaya Ropes, Mitch Booth.

“There were no set patterns, every race was different, every strategy had to be different, I had to use all my knowledge and experience today to try and weasel our way through it. It was really tough,” he added.

Drawing on his Olympic medal race experience, Booth sailed to victory in race 10 whilst fellow Olympian Lorenzo Bressani at the helm of Lino Sonego Team Italia took a third in race 13. But the unexpected moment of glory today went to GAC Pindar in race 12. Australian skipper Seve Jarvin chose a risky port start, ducked the fleet, broke from the pack and popped out ahead to lead from start to finish.

Struggling with consistency and decision making, Leigh McMillan, helm on The Wave, Muscat unusually finished low in the fleet, losing his overnight lead and ending the day in third place overall. SAP Extreme Sailing Team, meanwhile, were consistent mid-fleet performers and held their second place in the overall standings.