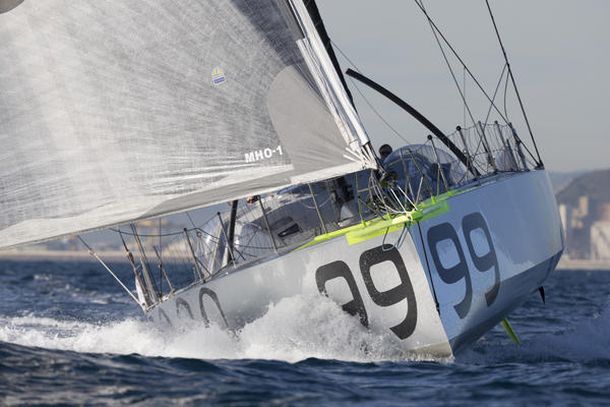 The motorway south to the Equator was opening up for the Barcelona World Race leaders this morning and British skipper Alex Thomson on Hugo Boss was back enjoying life in the fast lane.  Speaking on the live video call today, when he was steering the VPLP-Verdier designed IMOCA 60 at more than 20kts in the brisk trade winds, the pleasure was written all over his face.  His huge grin spoke volumes.

For Thomson and Spanish co-skipper Pepe Ribes there is the knowledge that the strongest trade winds should last at least through until Friday. There should be breeze to the Equator and the cherry on top is that the Doldrums presently look like they may open the toll barriers wide and let the leaders through without taxing their speeds more than neceesary.

>From their position as the most easterly boat of the fleet last night, just 17 miles off the African coast at one point, Thomson and Ribes gybed back towards the pack, sailing west again. Their strategy, as the only boat to go east of the Canary Islands, certainly did not harm them – even if Thomson admitted their angle back to the west was not as beneficial as had been hoped for – and by this Wednesday afternoon, one week after starting in Barcelona, Hugo Boss leads by about 20 miles. The battle for second to fourth is nip and tuck, GAES Centros Auditivos and Cheminees Poujoulat trading third this afternoon and Neutrogena steady second.
As per the forecast, the NE'ly trade winds were at a pretty lively 30kts in the middle of the morning and slightly more is anticipated. Thomson was anticipating 32-33kts in the gusts.

The express speeds south might see them break the passage time for Barcelona to the Equator of the last edition. In 2011 the leaders Jean-Pierre Dick an d Loick Peyron – on Virbac Paprec 3, which is now the Hugo Boss of Thomson and Ribes – took 12 day 14 hours to the Equator, which they passed one hour ahead of Foncia. This time the pace is looking like they will reach the Southern Hemisphere by the morning of the 11th, or thereabouts. That is based on current meteo projections.

Of course with the bone-shaking, fast ride south so now the post-start honeymoon period of light and modest breezes is now over. The muscular trade winds and relentless pace will expose any immediate flaws in the partnerships, the race craft and equipment. Thomson emphasized how quickly a virtuous circle can quickly develop if the duos do not look after themselves and each other:

” I dont think either of us have had more than a couple of hours sleep. But we are very conscious of trying to keep the (other) man fresh, it is so important not to make a mistake in these kind of conditions. That costs you miles and then you have to work harder, that means less sleep, and them more probability of mistakes. So it is really important to look after each other.”

The battle for second, third and fourth is between well sailed Farr designs of the same generation and it is extremely close. Second was still Guillermo Altadill and Jose Munoz on the Neutrogena who are just 13 miles ahead of Bernard Stamm and Jean Le Cam sailing Cheminees Poujoulat. Both Cheminees Poujoulat and GAES Centros Auditivos were neck and neck and speed-gunned (measured over 30 minutes) at 17.8kts. But the Spanish duo of Anna Corbella and Gerard Marin drew praise from Thomson today for their race so far on GAES Centros Auditivos. They have maintained a high pace and lie fourth, still very much a thorn in the side for the established IMOCA duo Stamm and Le Cam.

” I think GAES has done a fantastic job, really great. They have obviously massively upped their game for this Barcelona World Race and they are definitiely contenders now. I am not surprised how close we all are, so far.”  Thomson admitted today.

In many respects too the honeymoon period for the like of Aleix Gelabert and Didac Costa on One Planet One Ocean/Pharmaton is also drawing to a close. They have sailed the fleet's oldest IMOCA 60, the former Kingfisher, astutely and with alacrity these first few days but as they line up to drive south all on the same route with the same trade winds, it is inevitable they will lose miles to those behind and ahead.  They have lost 100 miles to the leaders in 24 hours, not least as they have been sailing west. As Gelabert, sixth overall, confirmed today:

” Our boat is the oldest one so it not as good a performance in the same conditions. In these conditions now the other boats are faster. Also they had more wind before us so they are going faster so it’s normal that they get way now a little bit earlier.And as for We Are Water we are not worried about We Are Water. We kn ow that she was going to catch us and Bruno and Willy are sailing well and going west is a good tactical decision also. So they will probably catch us. They have a boat with a better performance so its normal if they catch up us fast.”

Alex Thomson (GBR) Hugo Boss:
Strategy at Canaries, did it work?
” We got the impression everyone else would go between Lanzarote and Grand Canaria. When we had to make a decision there was about 40 minutes of difference between the routes and it seems to have paid off, there has been some gain. “

“We expected to be more headed when we were coming back (so making an angle more south), but the wind was a bit more right than we came back, so we had got south quicker, we had a lot more wind than we thought (earlier on) and so when we came back our course was more westerly than we expected. We ended up going back a little closer at the fleet. When we looked at the initial routing we expected to gain about 10 to 15 miles and that seems to be what we have done.”

Is it as close or closer than anticipated?
” I think ourselves the three of us, Cheminees Poujoulat, Neutrogena and ourselves would be close, I think GAES has done a fantastic job, really great. They have obviously massively upped their game for this Barcelona World Race and they are definitiely contenders now. I am not surprised how close we all are, so far. When I did the Vendee Globe and we popped out of the Doldrums I was there with Francois Gabart, with Bernard Stamm with all of them, so I am not surprised to see how close we are all in speed. I think maybe when we start to go at real pace in some proper reaching we can gain a mile or two then, but apart from that we seem to be quite even.”

Describe how you are working the boat
” We did have a plan to have some kind or routine and it has not worked out like that. I think an amateur sailor coming on one of these boats during one of these races would be horrified by the amount of work and the lack of sleep that is required to be able to perform a the highest level. We hoped to have a routine, but it has just been naps whenever we can. I dont think either of us have had more than a couple of hours sleep. But we are very conscious of trying to keep the man fresh, it is so important not to make a mistake in these kind of conditions. That costs you miles and then you have to work harder, that means less sleep, more probability of mistakes. So it is really important to look after each other.
Pepe woke me at 0630 and I had had a good sleep, so now I will go as long as I can and let him get a good sleep too. As soon as I stop being efficient I will wake him up. If we need to take a reef or change a sail then I wake him. But hopefully now he can ge t a few good hours in now.”

Any problems to date?
” We broke the rudder reference unit. That is the unit that tells the rudder how much rudder is on. It is a tiny little thing. I show it to you. There is a little metal piece which comes out, a little ram and it broke. That broke when we got the net round the keel in the Straits of Gibraltar. We have a spare so that is OK but we need to make sure it does not happen again.  The reason it happened was trying to get the net off the keel we had to put the boat head to wind, and allow the boat to be pushed, reversing off the net. Going through that the —-big wave —- bit of a puff there – we were in such big waves in 30kts the boat was going back pretty quickly, the rudder slammed to one side. And that is when it broke. We need to make sure it does not happen again, especially in the south where we might have to back up or the rudder kicks up. Without an autopilot this would be a much harder race.”

Fast to the equator?
“It is looking fast to the equator, and it is quite outstanding at the moment. We have 25 gusting 30kts at the moment. And it is due to build to gusting 32 to 33 kts. But it is good, bigger waves now and that makes for nice, fast sailing but I am going to be at this tiller position until we start approaching the doldrums. But after a few hours of this you look forwards to putting the pilot on.”

Food?
” The only fresh food we took was ten apples and ten oranges, we dont have any fresh fruits. When we want to eat we have very varied menus. Pepe has decided what he wants to eat and we have bags for every day. Day 1 and he eats it. I have to work out what I am going to eat over the whole period, what I am going to eat and when I am going to eat it. I am a fussy eater. If for example my Day 1 had a Beef and Potato Casserole and I did not fancy it, then I would be digging into my Day 2 bag, and so we are very different. We do eat together when we can. We try and eat when we come on watch. I am enjoying the diet, I have done this so many times I know exactly what I like and what I dont like. We have both got an amount of Iberica jamon which we are addicted to, I look forward to. I have a little bag of twiglets every day (a little savoury snack shaped like tree twigs).”