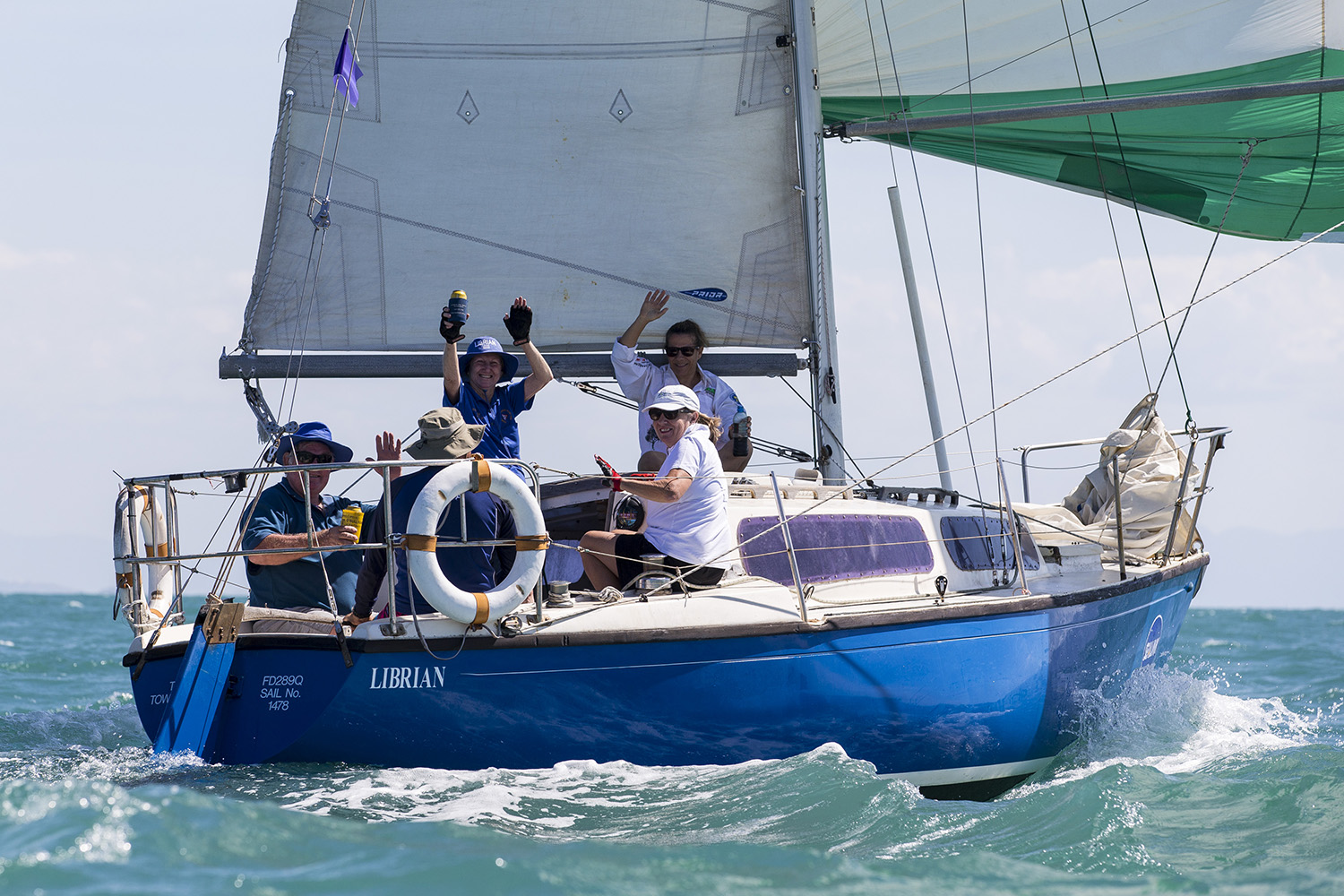 Wilson and his wife and boat partner Denise are here for their sixth appearance at the annual event, which is celebrating its 11th year, but a short time ago, Wilson did not know whether he would be ready to sail or not.

What should have been a routine tooth extraction was anything but, when it caused Wilson to have the heart attack. Sidelined, he left his Lyons 49 in the capable hands of Tony Kirby for Airlie Beach Race Week and did all doctors told him to so he could race here at Maggie Island.

“It’s so good to be back on the water and to end the day with a win – good for my first sail. I was so relaxed and in full sailing mode,” Wilson said.

“We had a blinder upwind and just felt in the groove – and stayed there. The weather was fabulous – 13-14 knots.”

A corker of a day with an ideal breeze and sunny skies for the opening day at today, but not everyone got off to the start they wanted.

On Wine Dark Sea owner Peter Lowndes was hoping to give Never a Dull Moment a run for his money – you see each owns a Lyons 49’s and both live in NSW. And both had a trick or two up their sleeves – Lowndes has three-time Olympian Karen Gojnich in the afterguard, while Wilson has Olympian and former world champion Nev Wittey calling tactics and sailmaker Ian (Hood Sails) Broad.

“I’ve known Broady for around 30 years. We’re mates and I love having him on the boat – he’s an asset,” Wilson said.

Lowndes, who finished fifth today, was worrying this morning that everything on the boat was shipshape.

“You know how it is when you haven’t raced for a little while and you’re wondering if you’ve done all the jobs? I think we’re ready. We’ll soon see,” he said.

First race nerves go the better of PHS Division 2 competitors, Thomas Hoogenbosch’s Bavaria 46 Therapy (Vic), and the locals on Mal Pirett’s Beneteau Oceanis 45, Champagne. Both were called over the start early, but Champagne’s crew did not heed the first call, so trailed her division as the fleet sailed uphill towards Cape Cleveland.

Perhaps the Therapy guys will drink champagne to recover this evening and the champagne guys might need some therapy!

Principal Race Officer Denis Thompson sent PHS 1 and 2 and Multihulls to Course 1, while PHS 3, and the Non-Spinnaker Division sailed the shorter Course 2 for Nautilus Marine Day Race 1. The scenic Around the Island Race is planned for tomorrow, starting from 11am.