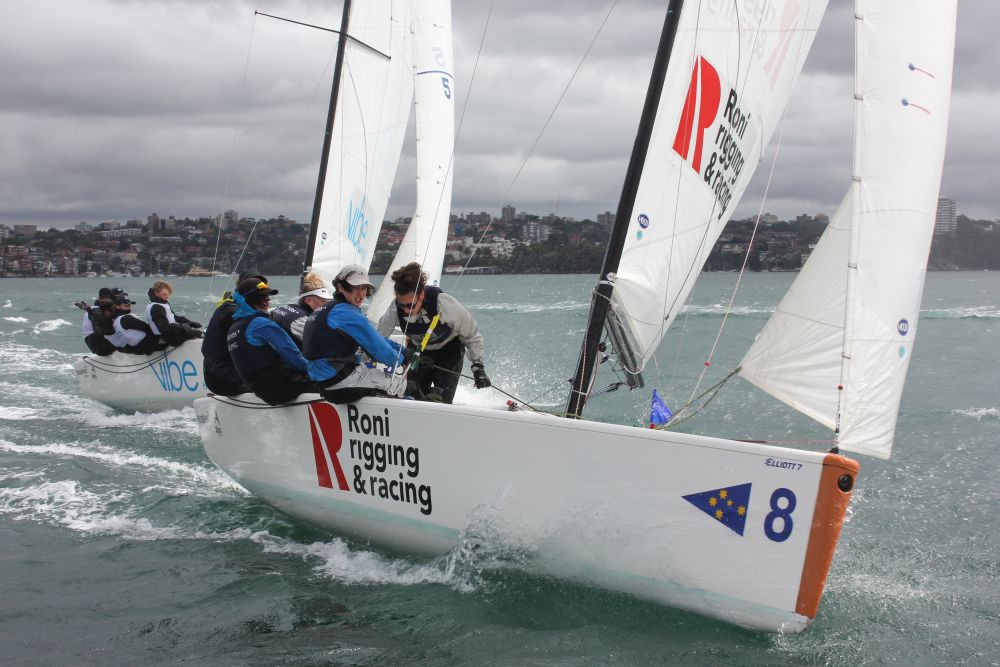 Friends School in action on the final day on a wet and wild Sydney Harbour. CREDIT - CYCA.

This weekend, for the first time, the Australian Schools Match Racing Championship was held on Sydney Harbour. An inconsistent storming southerly breeze ranging from 8-28 knots made for some fast paced sailing for the eight schools competing at the Cruising Yacht Club of Australia.

After its inaugural event only two years ago in Tasmania, and last year being held in Queensland, it was New South Wales turn to host the Championship event, and with the CYCA Youth Sailing Academy already hosting all of Australia’s other match racing national titles, 8 teams from 8 schools across Australia descended on Rushcutters Bay for the two-day event.

With a strong southerly forecast always on offer, the question was if the teams were even going to be able to hit the water. But a determined Race Committee team, led by Denis Thompson, pushed hard at the right times, whilst also cautioning on the safe side at others, to complete the full schedule of racing over the two days.

Day 1 saw the completion of the round robin stage with teams racing with spinnakers up till midday till no spinnakers were called for the afternoon. The Friends School, Scots College and Hutchins Schools all took early leads and looked certain for the semi-finals. The final semi-final berth though was still up for grabs with defending champions from Flinders Schools in Queensland, managing to scrape through over Darwin’s Jed Cruickshank.

At the end of the round robin stage, both Friends & Scots College were tied, with Will Sargent from Friends, coming out on top due to their win over Scots College Hugo Stoner in their match up.

Both semi-finals ran to form with Will Sargent dominating his match against Taylor Rogers (QLD), whilst Hugo Stoner defeated the highest ranked skipper in the regatta, Sam King from Hutchins School (TAS) to advance to the finals.

The Finals series saw a great display of match racing between the two teams, with all 5 matches needed to determine the regatta winner. Race 1 saw a late charge from Stoner and his team, but a controversial umpiring decision gifted the Tasmanians the early lead.

Stoner and his team came storming back in the following two races, to level the series, then pass heading into Race 4. After a pre-start penalty to Sargent in Race 4, the race unfolded for Stoner at the top mark in lap 1, when he collided with Sargent in a port and starboard situation. That collision cancelled out Sargent’s penalty, and gave him control of the race to level the series and take it to a tie breaker.

In the final winner-takes-all race, both teams through everything at the race, with several lead changes on each leg. But the race and the regatta were decided at the bottom mark gate, when an intense gybing and luffing duel catching the Scots team off guard.

This allowed Sargent to round cleanly and ahead to sail away up the final windward leg to take out the regatta 3-2. For Sargent, his racing week will now continue onto the Sharp Australian Youth Match Racing Championship, starting on Tuesday, where he will be looking to claim his second National title.