On Sunday the 19th of October 2014, the Len Randall designed Narani, a 31ft sloop, dragged her mooring and was beached on the Esperance foreshore in front of the yacht club. This is the story of her rescue, as told by co-owner Louise Stewart-Brown.

Editor's Note: I sailed into Esperance in November 2008 and stayed until April 2009. I crewed on Narani in a club race once and know all the people mentioned in this story. It is typical of this wonderful town and particularly the members of the Esperance Bay Yacht Club that they would gather to help a friend in need.

On Sunday the 19th of October 2014 Lindsay Jones and I were quietly sitting at home in front of the warm fire while the storm raged around us. We were concerned but felt relieved that Narani was happy on her mooring, as Lindsay had just driven down to the club to check her at 1pm.

At 2.30pm the door bell rings, Mark Quinlivan, a friend and fellow boatie, was here to tell us that Narani had broken her mooring and was heading for the beach – and very quickly – in the rough seas and strong south easterly gusting winds.

Don Murray, another friend and boatie, was a quick follow up to bring us the bad news. So a quick, get your act together, get into warmer clothing and wet weather gear, and down we drive to the beach, luckily only 5 minutes away from the house.

Our hearts are in our mouths, thinking, 'Oh my god, what do we do in these dire and dangerous weather conditions?'

When we reached her she was 20 metres off the shore and coming in fast. The boys rushed off in all directions, to get rescue boats, don wet suits, get rope and seek help. Ted Gray, a local Solicitor, was at the beach and stayed with me for support and help get a rescue team together.

Feeling near useless, I photographed her with my phone camera and popped the picture of the impending tragedy up on Facebook asking for men, ropes and a rescue team.

Sea rescue couldn't help, so someone rang Colin from Hudson's Dive Boats to see if the big boat was available to tow her away from the beach and it wasn't, but Colin volunteered his time. We had a Facebook offer within one minute of my post from Marcus Gray, a local businessman. He could get to us within 25 minutes with his boat to help.

Sadly Narani, in the meantime, had beached and was now getting bashed against the shore by rough onshore winds and waves. Tears of frustration, and with a stomach in knots Lindsay and I made the decision to get her up the beach, as getting a boat into the water or from the marina to tow a 6 ton boat off the beach was not possible. But how? S

Someone suggested another boat owner and family friend, Stuart McIntrye, as he owned a big Volvo Loader. Stuart was wonderful, he arrived, assessed the situation, and quickly returned with ropes and the big machine.

In driving rain the boys stripped down and headed into the seas to wrap a sling around Narani. Stuart got the big Volvo into position and slowly Narani was towed out of danger and up the beach.

Many hours later and many tow rope breaks, Narani was finally on the hard sand, out of range of the high tide, and all 6 ton of her was now not going to sink into wet sand.

And still the storm raged on. Winds gusting 40 plus knots and rainfall figures of 100 ml plus. By then we were all drowned rats, sopping wet and freezing cold.

We left her all locked up on the beach after dark, and didn't need to worry too much about theft or damage as no-one in their right minds would have been out of doors in the weather we were experiencing.

A little of her history. Lindsay and I have recently spent nearly two years repainting Narani and had placed her on the market for sale, so you can imagine how we were feeling.

She was built on the East Fremantle side of the Swan River by father and son, Stan and Allan Williams, in a shed in 1962. Narani was then sailed across the Bight and competed in the 1963 Sydney Hobart Yacht Race, being the first Western Australian yacht to do so. She didn't win, but she didn't do too badly either.

Narani is a Len Randall, “Blythe Spirit” design, is 31' long, draws just under 5'5″ feet and has a wine glass hull. She has over 6' head room inside and is made of New Zealand Kauri Pine. She still wears her original mast.

Narani was purchased by Keith Blythe in Albany on her return from the Sydney Hobart in 1964. In the early 1970's my Father, John Brown and family friend, Stewart Hockey, both sailing farmers and Life Members of the Esperance Bay Club Yacht, purchased Narani and sailed her back to race in Esperance.

Many local yachtsmen and women recall having the pleasure of racing on board her or enjoying a family day sail on the lovely Narani.

Many years later in the 1980’s she returned to Albany, with Jack Decker as her new owner. I met Lindsay Jones in 1994, at another yachty's wedding and moved to be with him in Albany in 1995. We wondered why we hadn't met prior as Lindsay was an S80 sailor sailing out of East Fremantle Yacht Club and I sailed out of Fremantle Sailing Club on Electric Tram and then Finistere for many years.

Of course, once living in Albany, I went in search of Narani, and as luck would have it she was in the marina in Albany and not much loved. I introduced myself to the owner, Jack Decker, and asked him that if he ever wished to sell Narani may I have first right of refusal.

We purchased her in 1997 and spent many hours restoring her at the Princess Royal Yacht Club in Albany.

We moved her to Fremantle in 1999 and spent some wonderful times sailing her in Perth waters. In 2001 we received news that my father was not very well, so Lindsay and I made the move to Esperance to spent time with him, and of course brought Narani with us. One of my father's greatest pleasures was to see Narani return to Esperance Bay.

So Monday morning arrives and what do we do to get Narani onto a jinker? The storm water drain had cut a wide channel into the beach so getting a crane to her was an engineering nightmare. After many phone calls to different sources we were stumped.

Lindsay was devastated that she may end up as salvage. We put a call through to my brother, Tom Brown, for suggestions as we were out of ideas. Tom put us on hold for a while and made the call to come in and help us. He loaded up the little digger onto the farm truck and drove in from the farm. With him was Chris Wells, ex Commodore of the Club, who works now with Tom on the family farm.

Tom arranged for Warren Slater, of Ratten and Slater Machinery to lend him his past trade-in, a huge tractor, which was duly delivered to the beach by Warren himself. Geoff Thomas arrived with his low loader to transfer the digger from Tom's truck to his to so it could be backed off onto the ground. Alan Kay and Kerry Castledine, both yachtsmen and Esperance Bay Club Members arrived to help us get the job done.

Narani was once again placed in a sling and the old lady was unceremoniously, literally, towed along the beach, into and up the other side of the cutaway and stopped in a position that the crane could reach her.

Brother Tom started up the digger and dug a trench the length of Narani in the sand along her keel. My brother in law, Tim Laycock, arrived and he slowly started digging sand away by shovel so that she slowly slid into the hole so the crane could pull the boat upright.

The crane arrived, our boys dug through the sand to get the straps into place, and the digger was then strategically placed, on the port side, to brace Narani while the crane started to take the weight.

Slowly, as if by magic, the plan the boys had concocted, was working.

Usually when Narani is craned into the air, my heart stops. This time it was a feeling of pure relief to see her moved slowly forward and placed in Ted Johnston (retired farmer and Esperance Bay Yacht Club Life Member's) jinker.

She was towed off the beach and is now resting on the hardstand of the Esperance Bay Yacht Club. Her side is staved in, she has several cracked planks, has a long split under the water line, we worry about the port side chain plate and she will need recorking.

We need an expert to tell us the extent of the damage and cross our fingers that her ribs are okay. It is going to be a slow process to get her back to perfect, but we will.

We are lucky that help materialised so quickly and she was quickly out of the harm of the sea bashing her to pieces on the beach. The damage could have been far greater and it proves the integrity with which she was built.

This lovely old lady turned 50 in 2013, She has many years of pleasure on the ocean to come. Lindsay and I would like to sincerely thank all the wonderful men, who gave so generous of the time, their machinery and their brawn to rescue Narani. 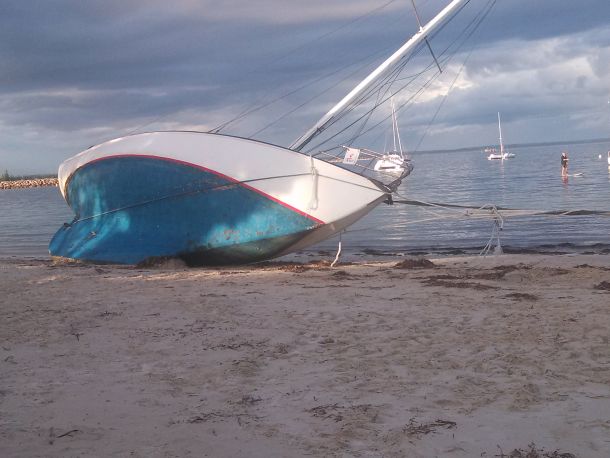 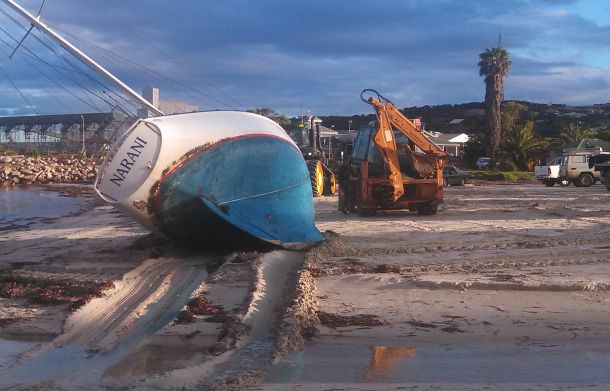 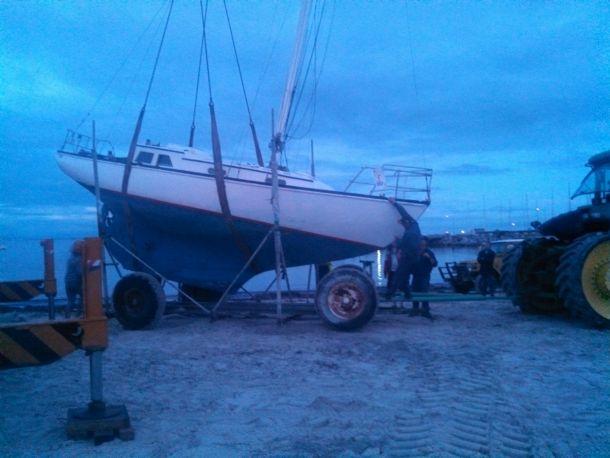