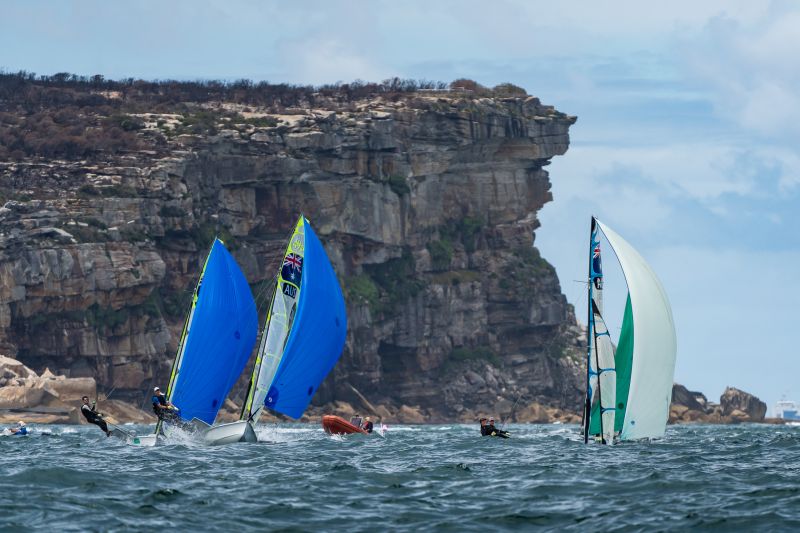 Sail Sydney rounded out with a bang today, with friendly fire forcing an early end to the regatta for Australian Sailing Team (AST) pair Jason Waterhouse and Lisa Darmanin.

It was their Australian Sailing Squad (ASS) teammate Lucy Copeland and skipper Jake Liddell who did the damage in close quarters before the start of the first Nacra 17 class race today.

“It’s been pretty intense competition here at Sail Sydney and we’ve had some tight pre-start match races,” said Darmanin after returning ashore. “Unfortunately today Jake and Lucy didn’t quite make the swing trying to hook us and we ended up with a pretty big hole in the side of our boat which has taken us out for the event.”

“We’ve had an east-sou-easterly breeze and big waves in the sound, which had been pretty fun racing, and always good to have to have a little bit more pressure on us rather than just training,” Darmanin continued. “It doesn’t really matter what happens we’re still happy with how we performed over the weekend.”

It was an otherwise highly successful return to competition for the full team, with AST and ASS athletes taking out all five Olympic classes.

Jake Lilley won every race in the Finn class ahead of coach and 2007 World Champion Rafa Trujillo, and Matt Wearn finished on top of a Laser Radial class that featured four AST and ASS athletes in the top five.

There was also action aplenty for the skiffs, with a small 49erFX fleet seeing them race alongside the 49ers on the same racetrack.

The 49erFX team of Tess Lloyd and Jaime Ryan made the most of it, winning every race in their class.

“We were up with the boys for some of the races, I think it was really good for us being on the same racecourse as them,” said Lloyd. “They’re a little bit more aggressive around the course and they are that tiny bit quicker, so we just tried to do everything we could to hold on throughout the race.”

Lloyd and Ryan are among the AST athletes already selected to the Australian Olympic Team for the Tokyo Olympics next year, and they will be using January’s Sail Melbourne regatta at Royal Brighton Yacht Club to continue their preparations for the Games.

“I’ve done a lot of sailing there, so we know we can expect some good waves, which will be similar to what we can expect in Japan,” continued Lloyd. “It will be another great test not just for us but for the whole team.”

Sail Melbourne is scheduled for 16-20 January 2021, with entries now open across all classes.