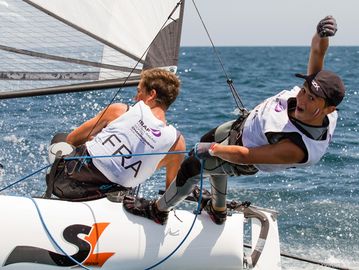 France's Louis Flament and Charles Dorange have the favourites tag pinned on them at the 2015 Youth Sailing World Championships having taken the title in Tavira, Portugal last year. From 27 December through to 3 January the high flying French duo will in amongst the 16-boat SL16 fleet aiming to defend their title in Langkawi, Malaysia.
The Langkawi Youth Worlds will break all previous records in terms of participation and number of nations. More than 430 sailors from 80 nations across nine fleets are registered to sail on the Malaysian waters off of Langkawi. New and returning nations make up the numbers to easily surpass the previous best of 67 set in Tavira, Portugal last year.

As returning gold medallists and 2015 World Champions, Flament and Dorange come into the Youth Worlds as the ones to beat but they won't be taking anything for granted. “Our title in 2014 gives us a little advantage because we have been there before and others have not, but we do not underestimate our opponents. Nothing is certain and it is a long way to victory,” the pair said.

The French duo took seven race victories in the 2014 series and whilst they made some mistakes along the way, allowing their rivals to see them in their sights heading into the final race, they made no errors on the last day, taking the bullet and with it gold.

Their bond in the boat stems from a long term partnership that started when they were just seven and ten respectively. By looking up to their idols the pair always knew what they wanted to do as they explained, “When we saw Billy Besson [Nacra 17 and Formula 18 World Champion] racing the SL16 we wanted to be like him because he is a World Champion. We always wanted to be like him so we are happy that we are a world champion, like him.”

Besson is a three time Nacra 17 World Champion and is arguably the favourite for Rio 2016 glory. Whether the pair can follow in their hero's footsteps remains to be seen but the journey to stardom begins at the Youth Worlds and a second gold in Langkawi could set them on their way.

Further competition for medals will come from Australia's Shuan Connor and Sophie Renouf, Great Britain's Jack Butters and James King, New Zealand's Tamryn Lindsay and Will McKenzie as well as the USA's Mark and Anderson Brunsvold.

The SL16 fleet will be sharing eight boats throughout the Youth Worlds with a qualifying series and a final series. Boats have been assigned to blue and yellow fleets for the opening day of racing based on their performance at the last four Youth Worlds.

Four races on the opening day are scheduled for the blue and yellow fleets. Boats will then be assigned fleets on a daily basis based on their overall position. Each fleet is scheduled to sail four races each day leading up to the final day. On the final day the fleets will be split into Gold and Silver where the final placings will be decided.

Sailors will start to arrive at the Langkawi venue on 27 December where they will receive the supplied equipment from Ovington, UpMarine, Nautivela, Sirena Voile, Neil Pryde and Laser Performance/Maclaren.

From there, the ceremony on 28 December will signal the start of the Youth Worlds before racing commences on 29 December. Racing will run through to Sunday 3 January with Friday 1 January a lay day for the sailors.