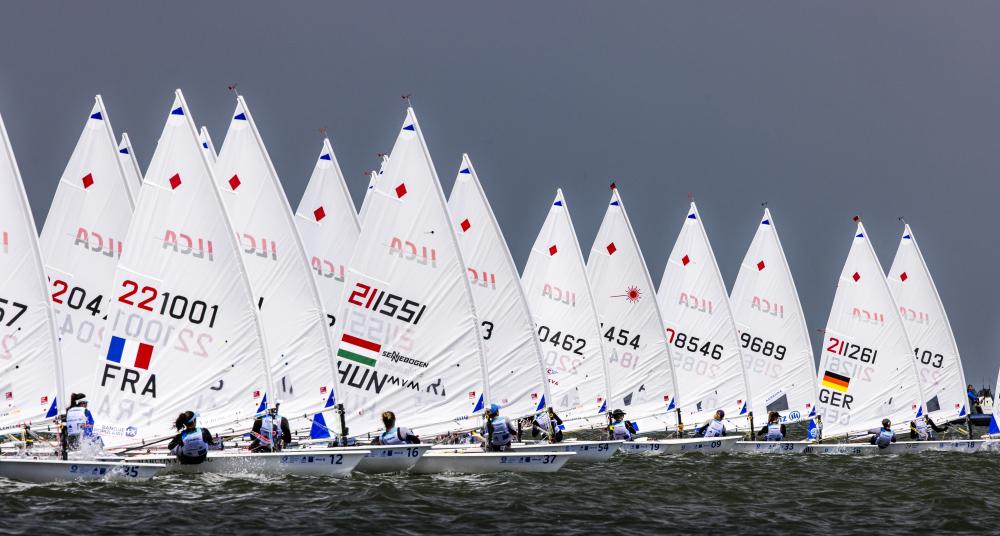 Marie Barrue (FRA) won the opening race of the ILCA 6 (former Laser Radial) competition on day one of the Hempel World Cup Series at the Allianz Regatta, taking place in The Netherlands.

Barrue was outright winner of last year’s Allianz Regatta further north in Medemblik. Today marked the first day of competition in the more confined waters of Almere, not far from the capital of Amsterdam. The change of venue didn’t seem to throw the French sailor off her stride, however, as she battled her way to a race win ahead of her teammate Louise Cervera (FRA) in second, and Carolina Albano (ITA) in third.

After dominating the first Hempel World Cup Series in Palma two months ago, the Trofeo Princesa Sofíia, Canada’s Sarah Douglas is seen as one of the favourites in the ILCA 6 fleet. She finished a very respectable fourth place in tricky, light airs today.

“For the last week we have had breezy offshore conditions, 20 knots of wind. And you know, of course, it happens to every sailor when you train in one kind of condition and then for day one of the regatta it’s something completely new, so it’s going to be a challenge getting used to the change of pace. We’ve got a lot of fast athletes here, it’s a strong fleet and it’s going to be a tough week,” Douglas said.

The 40 boats in the Men’s 49er skiff are divided into two qualifying groups – Blue and Yellow – and today they raced on different courses. The Belgian team Arthur De Jonghe and Jan Heuninck won the Blue Group race ahead of Australians Jack Ferguson and Max Paul. Home favourites and reigning World Champions from the Netherlands, Bart Lambriex and Floris van der Werken, made a mess of their first race in the Yellow Group when they sailed into a big patch of weed and almost stopped.

“We should have tacked to avoid it,” said Lambriex, “or we should have pulled up the foils to clear the weed sooner. By the time we did that, the fleet had pulled away.”

No mistake a second time

Fortunately for them the race was abandoned due to a big wind shift and the Dutch earned a reprieve. They didn’t make a mistake a second time. “We were first to get over to the right and we found good breeze over there,” said Lambriex. “We protected the race from there, but the Austrians were pushing us all the way.”

Benjamin Bildstein and David Hussl (AUT) have been sailing together for 10 years and are back on the campaign trail after taking a break from racing following their Tokyo 2020. “We had a good race with the Dutch all the way round the three-lap course,” said Bildstein. “We couldn’t quite catch them, but it was good fun.” The Dutch and Austrians stretched away to a lead of more than 300 metres from the rest of the pack, and the Dutch held on to win the race by little more than a second.

These are the kinds of moments that make competition so vital, not just for the thrill of the battle itself but for building confidence and experience in the build-up to the Paris 2024 Olympic Regatta. The Netherlands and Austria are two nations who have yet to win Olympic medals in the 49er skiff, but these two teams are getting closer and closer. “We’re working on our communication,” said Lambriex of his working relationship with van der Werken. “What we say to each other in the boat, simple things, but important things that make a difference at key moments in the race.”

The tricky breeze meant no racing in the 49erFX, Nacra 17 or 470 Mixed fleets today, so the hope is for better conditions on Wednesday.

Wednesday is also the opening day for the fast new foilers in the Olympic sailing line-up due to compete further north out of Lelystad, the iQFOiL windsurfers and the Formula Kite competitors.

For more information about the Hempel World Cup Series at the Allianz Regatta, including entry list, notice board and more, click here.