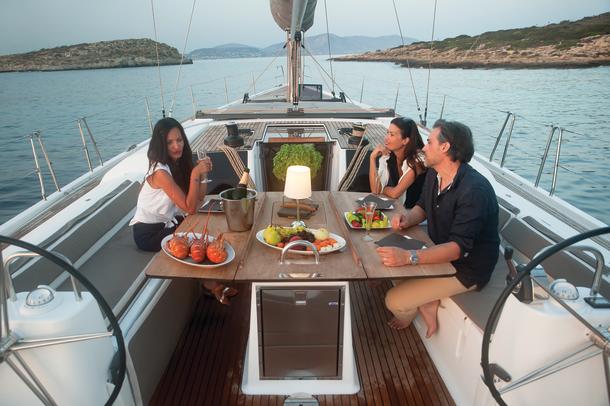 Nothing focuses the mind like preparing for an ocean passage. Zefr, our 43 foot ketch, was the chosen vessel for our great escape from Thursday island to Thailand via Indonesia and Malaysia. We were raring to go but still that pesky supplier of sustenance, known as work, demanded our attention for yet another two months.

But in every spare moment we prepared for the journey.

We were still working Monday to Friday, but in our heads we were already sailing, so we spent our weekends stocking the boat.

Weekly expeditions to the local ship’s chandler allowed us to empty our treasure chest on all manner of essential ship’s stores: a chart plotter and AIS; new anchor, chain and gypsy for our windlass; safety lines; lifejackets and wet weather gear; plus stove fiddles to secure pots in place while at sea.

We were not mundanely shopping for groceries, we were taking on ship’s stores. We weren’t just ‘putting the groceries away’, we were gallantly stowing supplies, loading lockers and clambering down into deep storage areas under the bunks and in the bilge.

Lin Pardey, also known as sailing royalty, repeats it like a mantra: your boat is a warehouse. She is right I think, sometimes in the doldrums it certainly sails like a warehouse! But it does feel like visiting a warehouse when, after a month or so at sea with apparently nothing in the cupboards, you dig deep down and come up with an unusual package that cannot be bought in your new location.

I had read that Asian dry goods are of poor quality that the rice can be tasteless and have critters living in it. So we bought sacks of rice and beans and one kilogram packets of various spices. We were never going to get through these. Eventually I gave these away to locals and fellow yachties.

We bought 20kg of pasta, 20 tins of tomatoes and 20 packets of parmesan cheese, yet we do not eat spaghetti that often. But you may not be able to get this stuff in Asia, right?

As we do not have a freezer we bought half a cow of cryovacced meat, ten salamis and ten kilos of bacon. Our top-down chest fridge is very economical on power, but all contents must be stacked. It was so full that we could really only access things in the top layer. Sometimes this was marmalade and olives. A week of culinary transmigration later and it was salami and chocolate; if I had been pregnant maybe these combinations would work better.

Much wine and beer was buried in the keel. Everyone knows you can not buy alcohol in Indonesia right? Actually, you can buy beer, although in the more remote Muslim towns it can feel like an undercover operation. In bigger towns you can buy a bottle of spirits. There is no wine, however, so if that is your poison: BYO.

A friend ordered some dehydrated mince packets and I ordered two dozen and had them freighted to Cairns. Who buys two dozen of an untested product? A shopaholic that is who. It looks and smells like dog food when it is reconstituting but, once it’s fried up with some herbs and spices, it makes a passable bolognese or chilli beef.

As we sailed up the east coast the boat was bursting at the seams and we had sunk at least ten centimetres in the water. This means that the antifoul, designed to protect the hull from marine growth, finished around 10cm below water level. Consequently, even before we cleared customs in Thursday Island, Zefr had a green beard right around her hull. When I say green, I mean bright lime green, fluorescent safety-wear green.

We soon learned this stuff just does not die.

The skipper and I got in the water and scraped it off, this worked well for perhaps 48 hours before signs of a green weedy recovery. One day I sprayed it with a bleach solution: aha, got it! Instant death! It lost its colour, immediately fading to a pale beige. The waterline looked great for a matter of days, until that luminescent lime stubble sprouted and flourished.

Crabs moved in, scuttling around the lush green pastures, merrily snapping up stray morsels. One day the little girl from a neighbouring boat paddled over on her board and we hung out at water level. She took greet glee in capturing the crabs and said a little enviously “we don’t have these on our boat!”. Homeless little mussels, liking the lush-looking bed of green, took up residence. Our young neighbour and I found it quite satisfying to yank these off before they locked-on for good.

The skipper used the hooker to dive down and scrape the keel. He surfaced, saying “there’s something moving around in my ear”.

“Stop poking it and see what happens,” I suggest. A little crab gingerly peeked out and made a leap for the water.

Over the course of the next few months, we worked our way through the tonnage of supplies and the boat rode a bit higher in the water, our speed may have picked up half a knot or so.

Many bags of groceries, clothes, books and spare tools were donated to locals. I learnt that everywhere we went people actually ate food and we could buy it in the local shops and restaurants. So we kept a sensible amount of supplies stowed away, enough emergency food for a week or two, not a month or two. After all we are not yet crossing major oceans, we are pootling around amongst the 17,000 islands of Indonesia and most have populations who produce or import food.

I have worked out that less is more. With less in the cupboards and fridge, I can keep track of what we have and, subsequently, do not waste a lot of food. It lightens the boat, especially important if you are on a ‘catameringue’. It also lightens the mood of those in the galley, it is just less stuff to manage in a confined space.

At last we arrive in Thailand, it has been six months and 6000 nautical miles since we left Sydney. We have lost our green beard and gained an extra half knot of speed.

Now the skipper and I just need to lose the extra kilos we have accumulated! ≈