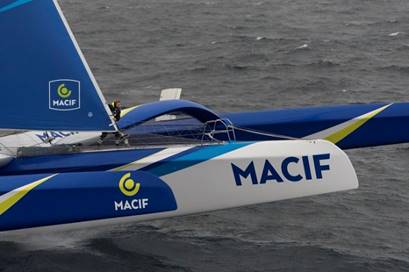 After four weeks at sea, François Gabart has managed to reposition Macif ahead of a low-pressure system and has picked up speed again, attacking the last part of the South Pacific as he heads to Cape Horn in his attempts on the round the world record.

The skipper of the trimaran succeeded in carrying out some small repair jobs on his boat and is planning to round Cape Horn between Sunday evening and Monday morning. During a radio session this Monday morning, he admitted that he was dying to get back to the Atlantic again.

Can you describe the conditions in the South Pacific?

FG: “The wind speed is currently at 35 to 38 knots: the wind has only just picked up and the sea isn’t too bad. I’m making quick progress between 30 and 45 knots. It isn’t easy to maintain a regular speed. I’m trying my best, but I’m not going to complain as things are headed in the right direction and at a good pace.

“Since the beginning of the South Seas, I’m either ahead or behind a low-pressure area. We don’t yet have a boat sufficiently fast to overtake these phenomena, particularly when the wind speed is 50 knots.

“These last three days, I was behind. It was tough, because there wasn’t much I could do except slow down if I didn’t want to take a beating. Now, I’m ahead. I need to sail sufficiently fast to enjoy calmer winds and sea, to prevent any damage. You need to get the delicate balance right.”

What are the key points to watch in these conditions?

FG: “When the wind is strong, you initially try to prevent the boat from overturning, so I’m careful about that. The sheets aren’t far, ready to be eased off and the automatic release system is also in operation. Otherwise, the wave impacts are really tricky. The overall goal, and the hardest one, is to maintain as stable a speed as possible, because when things are happening very fast, there comes a time when you stop in a wave and the boat goes under and it's very violent.

“The aim is to sail fast on average, without any peak speeds. Otherwise, I regularly check the boat to see that none of the parts have moved or if a sail hasn’t unfurled. The two forward mainsails, the J1 and the gennaker are really well secured to the central hull, where they are laid, but when you reach 45 knots in the water and the sail weighs 150 kilos, the strain is colossal. If a strap breaks, things can quick turn to a nightmare. So, I try to go around the boat as often as I possibly can.”

Have you finished all the repairs you had planned?

FG: “Yes, I’m very happy. There’s nothing left to repair. In principle, my two biggest worries have been dealt with. I managed to finish the furling system job yesterday and I am fairly happy with the result. I also had a few small hydraulic problems. There were air bubbles in the system. I bled the system several times and it looks like that worked. The boat is really doing well, which is pretty ideal as we approach the last leg of the Pacific.”

How do you feel physically, after being tossed about in a difficult sea early this week?

FG: “I got some good rest last night, so I’m not too tired. However, I am being careful about my muscles, because I feel the strain, particularly around the neck. I try to do some good stretching, because I’ve been sailing a few weeks now and I’ve been jolted about in the last few days. It’s difficult to relax your muscles, even in the bunk, because you’re being knocked around in all directions, so I’m careful about that, because I’ve still a few crank turns before the end…”

How is the end of the Pacific looking with the rounding of Cape Horn ahead?

FG: “Not bad really. I try not to get too excited too soon and to stay focused, but, in principle, if everything goes well in front of the low, then it’ll be full ahead to Cape Horn. The next few hours will be crucial. If I manage to stay ahead of the low-pressure area, the sea shouldn’t be too bad. I hope that it will stay like that until the Horn.

“There is still ice to starboard and we are not going to take any risks, but the weather situation means that we can keep our distance further north. I’m hoping to round Cape Horn at the earliest on Sunday at the end of the day, around 18:00 (UTC+1), and at the latest, on Monday morning.”

You probably can’t wait to be there…

FG: “Oh yes, definitely! Naturally, I really love the South Seas. It’s magnificent to be sailing here, but it’s always the same. When you get to the end, you’re happy to leave. I’m really dying to get back to the Atlantic, to warmer climes and just to get closer to the finishing line, because the clock is ticking.

“Afterwards, I know that it’s far from over, that it’s going to be hard work and that the Atlantic will be full of pitfalls, but nevertheless, Cape Horn is a very symbolic place, and I really can’t wait to be there.”

Do you have any idea of what’s waiting for you in the South Atlantic?

FG: “I had a look this morning and Jean-Yves (Bernot, Ed.) sent me a quick summary. I’m taking it for what it’s worth because it’s still quite far off, but it’s looking favourable: quite tough at the start, which is quite good because and this will make it easier to get to the northeast. Then, as usual, you have the transition areas facing Argentina and Brazil. I hope that the weather sequence will work out well. For the moment, the lights are looking green, so it’s cool, but let’s get to Cape Horn first with a boat at 100 percent of its capacity.”