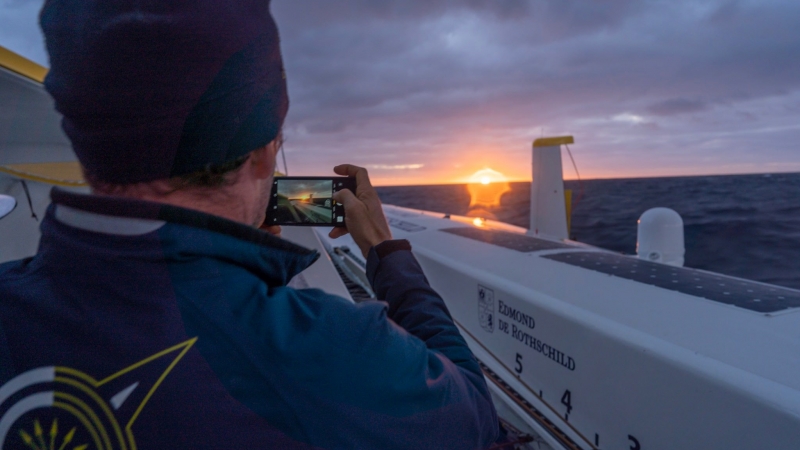 After little under 29 days at sea, Franck Cammas, Charles Caudrelier and media man Yann Riou are expected to be crowned the winners of Brest Atlantiques on Wednesday morning.

Following 24 hours going at very high speeds off the Bay of Biscay, Maxi Edmond de Rothschild is expected to finish in lighter winds and claim its first major victory just less than two and a half years after its launch.

The bay of Brest, illuminated this morning by a magnificent winter light, is preparing to welcome the winners tomorrow morning, unless there are any last-minute twists. Maxi Edmond de Rothschild has stayed in the lead since November 14th, just after it crossed the first race marker in Rio de Janeiro.

Since the weekend, the two skippers have managed to achieve the perfect racing performance as they approach the finish line. Having covered 728 miles between midday on Monday and Tuesday, at an average speed of 30.4 knots, this has been their second-best day since leaving Brest on 5th November.

The trimaran, designed by Guillaume Verdier with the help of Gitana’s design team, and built at the Multiplast boatyard in Vannes, should cross the finish having sailed a total of 17,000 miles at an average speed of 25 knots. A fine reward for an Ultim trimaran and its skippers who, apart from when crossing the Bay of Biscay and during their pitstop in Salvador de Bahia, have always been in the lead, living up to their status held by many as the favourites to win.

This success will be important for Gitana, as the trimaran’s first big win on an offshore race, two years after finishing second in the Transat Jacques Vabres (but with broken foils), and one year after abandoning the Route du Rhum after losing its front starboard float. But equally important for Franck Cammas and Charles Caudrelier, who took the helm of the Ultim last April and who will in seven months have succeeded to lead it to victory (they also won the Fastnet in August). There will no doubt be crowds waiting and ready to cheer them on as they dock their trimaran at the Quai Malbert in Brest tomorrow morning.

The two other trimarans still battling it out in the race, MACIF and Actual leader, are expected between Friday evening and Saturday afternoon. With only 25 miles between them this afternoon, it is still unknown who will end up securing second place.