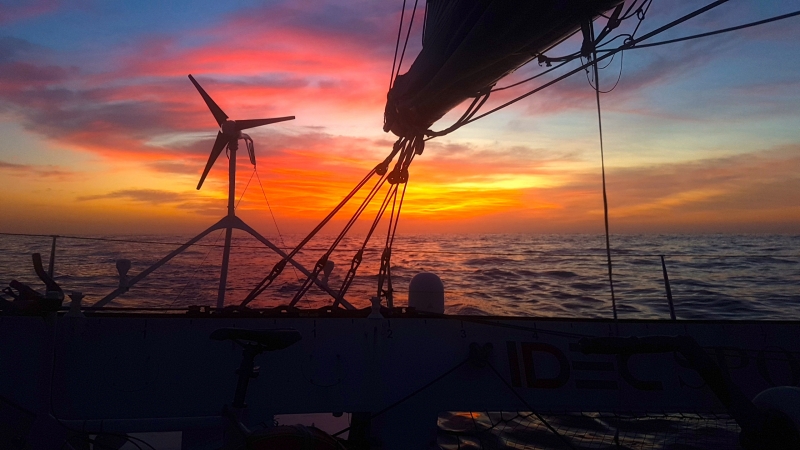 Crossing the longitude of the Cape of Good Hope today at 1:30 hrs UTC, Francis Joyon and his crew of four completed the first half of their attempt at the Tea Route record, which has been held since 2018 by Giovanni Soldini’s Italian crew.

14 days, 17 hours, 29 minutes after leaving Hong Kong, and having sailed 7666,3 miles averaging 21,7 knots out on the water, they have clocked up a lead of one day, 8 hours, 56 minutes over the record time. This is a particularly remarkable performance given the conditions they encountered particularly in the Indian Ocean, which was far from being cooperative with the absence of the trade winds forcing the maxi trimaran to zig-zag her way around the bubbles of low pressure against the prevailing weather systems of the Southern Ocean.

Contrary to expectations after what they experienced on the way out in the framework of the two records they set between Mauritius and Ho Chi Minh City and from Vietnam to Shenzhen, the China Sea revealed its friendlier face from the start in Hong Kong on Saturday 18th January, apart from the heavily polluted waters…. A decent NW’ly wind enabled them to sail smoothly downwind and while the crossing of the Equator proved difficult in December, this time it went without hitch. The maxi trimaran managed to maintain a good average speed as she made her way between the many paradise islands to the west of Borneo. Francis and his men were therefore able to make their way through the Sunda Strait, the gateway to the Indian Ocean, by 22nd January. At that point, they had already achieved a substantial lead of almost 300 miles over Giovanni Soldini’s trimaran. On cross seas, but with a strong SE’ly air stream, Francis extended his lead achieving his best day in the Indian Ocean covering 645 miles at an average speed of 26.9 knots. He regularly increased the gap over the record time reaching 829 miles last Wednesday.

The Indian Ocean then became much less cooperative. On the second day of sailing, all eyes on board focused on two centres of low pressure, which were deepening to the east of Madagascar. IDEC SPORT turned to the south remaining at good speed, in spite of steeper waves. This detour led Joyon and his men down into the far South at almost 37 degrees South. With cold weather and the first sight of albatrosses, the men on IDEC SPORT enjoyed sailing in these extreme conditions, something that Francis had done many times before during his long career. A small upset occurred at the start of the second week of racing, when a worn halyard gave up the ghost forcing the big trimaran to sail for several hours under reduced sail while awaiting quieter conditions to carry out repairs as quickly as possible. Antoine Blouet climbed to the top of the mast as soon as the seas eased off a bit, and IDEC SPORT got back into her race with a huge obstacle course ahead of her with troughs, transitions and fronts to deal with.

The Indian in the opposite direction

“We are sailing in the opposite direction to the weather systems,” explained Francis after ten days of testing sailing conditions. They needed to round some high pressure centres and some lows often with the wind on the beam or even upwind. IDEC SPORT bounced from one system to another, shaken up by the violent passage of weather fronts, which forced the short-handed crew to work hard to set the sails just right and above all to deal with the rapid wind changes and seas that caused the big trimaran to lift up her floats and bows.

Act 2: Hello to the Atlantic

Francis, Christophe, Antoine, Corentin and Bertrand feel somewhat relieved to be back in the Atlantic. They can now look forward to smoother sailing in the southern part of the ocean with the air warming up off the continent of Africa. They are sailing close to the coast and pods of cetaceans and seals, which live in these warm waters. 6000 miles lie ahead in the Atlantic and their progress will be determined largely by how the Azores and St. Helena high-pressure systems behave. Looking at how they have performed so far, finishing in London may be possible on around 15th or 16th February. To beat Giovanni Soldini’s record, IDEC SPORT must reach the Thames before 1036hrs UTC on 23rd February.