France is historically the world’s leading nation when it comes to multihull racing, so it is appropriate it is represented on the GC32 Racing Tour. In 2015, the state of the art GC32 foiling catamarans will compete in a five event European series starting in Austria in May and finishing at Marseille One Design in September. To date two French teams have announced their participation.

Sebastien Rogues is well known in sailing circles, but for racing offshore in monohulls rather than inshore in foiling multihulls.

The 28-year-old from Urrugne in the Basque region, has proved himself to be one of the most talented sailors of his generation. Starting out in the Classe Mini in 2008, he competed in the 2009 Transat 6.50 La Charente-Maritime-Bahia, finishing eighth in the Series class, despite being the race’s youngest entrant. He then graduated up to campaigning a Proto Mini thanks to sponsorship from Eole Generation-GDF SUEZ. A favourite for the 2011 Transat 6.50, he won the opening leg, but during the second suffered an injury forcing his retirement.

But Rogues has achieved his best results in the Class40. Aboard his Mach 40 GDF Suez, he won everything he competed in during 2013, the highlight of his season being victory in the Transat Jacques Vabre.

Rogues got his first taste of the GC32 class racing at Marseille One Design in September:  He recounts: “We managed to reach 34-35 knots during our training. It is quite extraordinary to be able to sail at such high speeds with boats that are less than 10m long. It is a new way to sail – you have to think differently, faster – but that is what piqued my interest and excitement.” 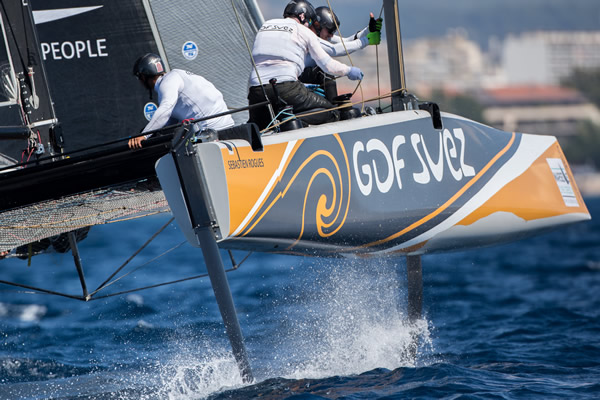 Such speeds are only possible on the GC32 thanks to its innovative foils, as pioneered in the America’s Cup, that elevate the catamaran from the water. Rogues continues: “I chose the GC32 because I think it represents the future of sailing, racing foiling boats on a circuit that is growing and which will be very competitive. This new generation of boats is revolutionary – I’m sure that within 10 to 15 years our children will be learning to sail on foiling boats.” While getting the GC32 up on foils is easy, the challenge, Rogues warns, comes from the team effort required to ensure the boat remains airborne, going fast.

This innovation is also attractive to corporate backers, says Rogues: “The budget required to have a chance of winning is well within the reach of a company interested in the technological innovation of these flying machines.” And being a one design, the GC32 represents good value. “I think that is its main strength. It makes it possible to keep budgets at a reasonable level and avoid any significant rises in the future.”

While Rogues is fielding a professional sponsored team, the GC32 is also attracting private owners. One is Erik Maris, who has been successfully campaigning one designs for 15 years. Maris is a past Swan 45 European Champion (2003), Mumm 30 World Champion (2005) and also raced a Farr 40 before moving across to catamarans. In 2009 and 2012 he competed on the Extreme Sailing Series and in 2010 joined the D35 catamaran circuit on Lake Geneva.

“I have sailed on many boats over many years, including multihulls, but I’ve found that the GC32 is something completely new and different compared to everything else I’ve experienced, thanks to the new dimension of sailing on foils,” Maris explains. “I was expecting foiling to become a ‘must’ even before trying the GC32, but now I’m convinced: Once you’ve tried it, it is hard to do anything else. This is what attracted me back into a sailing project for the first time in more than two years.”

Since 2012 Maris has been more active racing cars. He adds that other attractions of the GC32 are its size, the accessibility – he can go sailing on it whenever he wants – its easy handling, low transportation costs, plus affordable campaign costs.

While Rogues is still recruiting his crew, Maris will employ some of the best including five time America’s Cup and ex-Groupama trimaran sailor Thierry Fouchier, plus multihull veteran Jean-Christophe Mourniac and six time World Champion Jean-Sebastien Ponce, who previously sailed with him on the Extreme 40s. “Then we have two newcomers in the team: Gurvan Bontemps and Benjamin Amiot, two great multihull specialists, who share our values.”

Further teams joining the GC32 Racing Tour will be announced over the coming weeks.