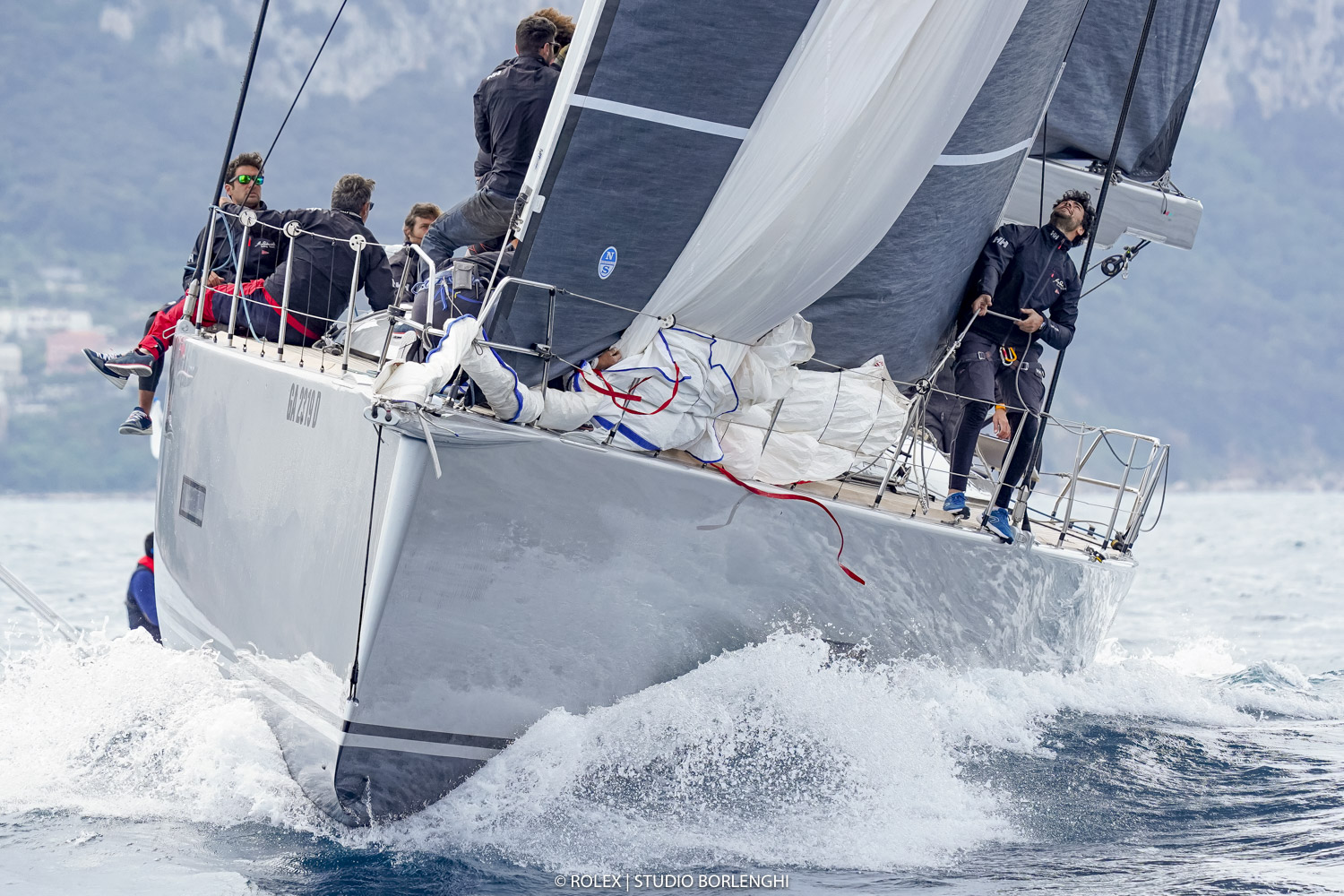 In light airs, with things not looking good early on, Vincenzo Addessi’s Fra Diavolo came through with two bullets to win Stage 1 of Rolex Capri Sailing Week, while Alberto Leghissa’s Anywave was first over the finish line.

Following last night’s deluge, the fourth and final day of racing at the Maxi Yacht Capri Trophy, the opening event of Rolex Capri Sailing Week 2021, was held in conditions that challenged both competitors and race committee alike.

A giant wind shift caused the first attempt at today’s single windward-leeward race to be abandoned. The race committee, led by Alfredo Ricci, then moved a little further out into the Bay of Naples. Starting in just 4-6 knots from the south and south-south/east, the race finally got underway shortly after 1400 CEST.

At the start Giuseppe Puttini’s Swan 65, Shirlaf ,won the pin end of the line. However, on board Alberto Leghissa’s Frers 63, Anywave, Italian America’s Cup legend Mauro Pelaschier was quick to call the tack as those on starboard keyed into a significant left hand shift with the breeze building into double figures.

Jean-Pierre Barjon’s Swan 601, Lorina 1895, picked up well on the final part of the first beat to trail Anywave and Cippalippa X around the top mark. However, Anywave managed to hang on to finish first on the water at the end of two laps.

“For the very first time we finished today in first position,” observed Mauro Pelaschier. “It was also the first time racing for the crew after the pandemic, so there was big excitement on board. The wind also made the course very stimulating. The race committee did an excellent job. We love to be in Capri – the organisation was excellent.”

For overall leader Vincenzo Addessi’s Mylius 18e35, Fra Diavolo, things weren’t looking so rosy at one point. On the first attempt at today’s race, they had been leading when it was abandoned, but in the second attempt they started in last place.

With overall victory slipping through their fingers, the team of the President of the Yacht Club Gaeta managed to recover during the race, eventually finishing third under IRC corrected time. Having posted back-to-back wins on Wednesday and Thursday, today’s third place was enough to secure Fra Diavolo the overall win at the Maxi Yacht Capri Trophy.

“We have never had such a gorgeous week in Capri before, and we are so happy we chose to be here, despite all of the uncertainties of the last weeks. The organisation was simply excellent, and we felt we were very much looked after, both by the Race Committee and the yacht clubs’ representatives ashore.”

Italian Olympian, Gabriele Bruni, was calling tactics on board Shirlaf for the first time this week and observed that there was more wind today than forecast:“Capri provides very technical race courses – in one day you can experience several weather conditions.”

Shirlaf performed better today as they were not dogged by their winch problems of the previous two days. “We are very satisfied with the results so far. Shirlaf is a very special boat…”

The only foreign-flagged boat competing this week was Lorina 1895 of International Maxi Association member Jean-Pierre Barjon.

“It is a historic week because it is the first time we have returned to do an event,” Barjon stated.

“Capri is a fantastic place and the conditions were really exceptional. We have had a great week with top level competition with the combination of pleasure of seeing everyone and also nostalgia that there weren’t as many teams as we would have liked there to have been. But really it was a great pleasure.”

Tomorrow (Saturday) racing continues with the offshore race, the Regata dei Tre Golfi. This starts from off the CRVI, located by Naples’ Castell dell’Ovo in the Porticciolo di Santa Lucia marina. However due to the COVID-19 restrictions the start will now take place at 1930 and not its tradition time of midnight.

The course takes the fleet north from Naples around the island of Ponza and then south, leaving Capri to port or starboard, rounding the Li Galli rocks on the southern side of the Sorrento Peninsula before returning north to the finish line off Capri’s Marina Grande.

Further prizes will be awarded for the Regata dei Tre Golfi, the second event in the International Maxi Association’s 2020-21 Mediterranean Maxi Offshore Challenge and for the combined results with the Maxi Yacht Capri Trophy.