Racing for the foiling GC32s resumed in dramatic style at the opening day of Marseille One Design, run by Sirius Evènements with backing from the city of Marseille. Throughout the day the northeasterly Mistral wind built and for this afternoon’s two races it was gusting to above 20 knots, causing the flying catamarans’ speed to soar at times well above 30 knots.

Star of the day was Flavio Marazzi and his ARMIN STROM Sailing Team. The team of the Swiss former Olympic Star sailor won both this morning’s practice races and this afternoon followed this up with victory in the first two scoring races of Marseille One Design.

Marazzi attributed his success today to ‘time in the boat’, with more foiling catamaran experience in his crew than his rivals. “It is a good result, but I think if you practice it is easier to sail the boat, particularly if you are new to the boat and there’s 15 knots when small mistakes can create problems.” 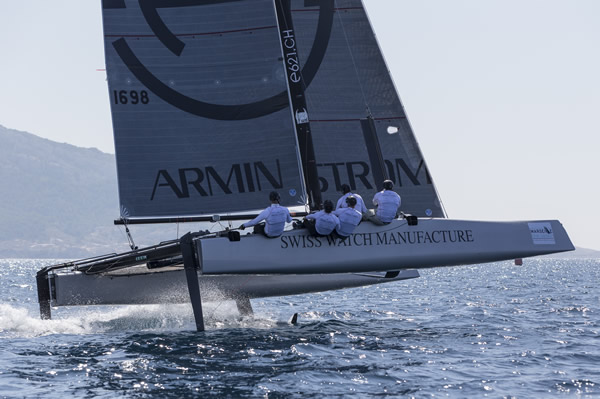 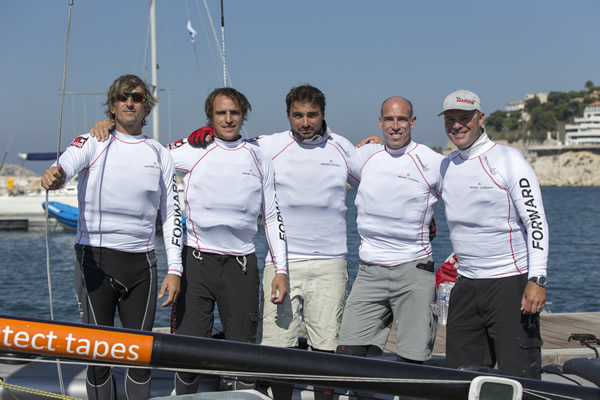 However Marazzi did not have it all his own way. While there is a strong sense of crews still getting to grips with the state of the art Martin Fischer-designed catamaran, since it became an airborne foiler at the beginning of the year, Dutch former A-Class catamaran World Champion, Mischa Heemskerk, nearly won today’s final race aboard his brand new Magic Marine.

With the boats sailing on an ‘America’s Cup-style’ course, starting and finishing with reaching legs, the final race saw multiple lead changes with the newbie Magic Marine crew ahead for most of the final lap.

“We made some mistakes,” admitted Marazzi, trailing at this stage. “It is hard to make no mistakes on these boats, but equally it is easy to catch up even if you are 200-300m behind. And it is good fun – the GC32s are rocketships.”

However at the start of the final reach into the finish, when they appeared to have victory sealed, Magic Marine suffered a problem with one of her boards, was unable to gybe, allowing her Swiss rival through.

Nonetheless, Mischa Heemskerk was delighted by the Magic Marine team’s performance, particularly as at midday they were still scrambling to get their boat launched. “It is a new team and we haven’t sailed together, so we are still figuring out boat handling during racing,” Heemskerk admitted. He welcomed this afternoon’s bigger breeze as it meant that his fledgling crew, that includes British Artemis Offshore Academy sailor Rich Mason, weren't forced to use the genniker on their maiden voyage.

“We are very pleased,” Heemskerk continued. “Everything stayed together, everything worked. There were minor issues and I am looking forward to tomorrow. The GC32 is a great concept and it is so well built and such fun to sail. You sit at the back of the boat and you look forward and there are four guys with big smiles on their faces.” 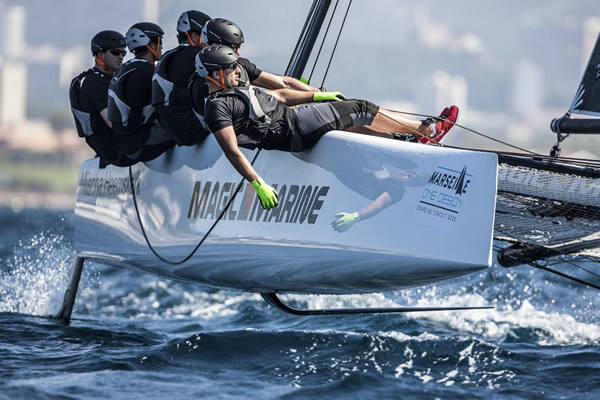 Unfortunately the GC32s have not sailed as a fleet since Traunsee Week in Austria in May and Marseille One Design is only their second event since they started foiling this spring. This created a few issues today.

First to suffer was GDF Suez, which during today’s second practice race broke the tip off one of her J-shaped daggerboards, forcing the French to limp back into Marseille’s Roucas Blanc Marina. According to skipper Sébastien Rogues, it was the ‘old’ board that broke just as they had dropped the ‘new’ board in preparation to gybe. Tomorrow he and his team, that includes two time America’s Cup helmsman Seb Col as tactician, will be back on the water with borrowed foils.

This is only Rogues’ first foray into foiling multihulls and despite today’s incident he is ecstatic about the boat: “It is just amazing, I love it – it’s a flying multihull. The boat is easy to sail.”

For this afternoon’s two races a short sharp chop had developed and this caught out GC32 creator Laurent Lenne and his SPAX Solution crew on the first run of this afternoon’s first scoring race. As Lenne explained: “We were doing 35-40 knots in about 25 knots of wind and the boat rammed a wave at full speed. Because the upwind board was neutral [rake], it seemed to hook up the boat and slammed it through 90 degrees.”

This round up was so violent that it tossed overboard Lenne, who was still hanging on to the rudder, in turn causing the rudder housing to break. They recovered but young French sailor Pierre Le Clainche damaged his ribs in the incident and was having trouble breathing. Lenne steered the boat back to shore from where Le Clainche was taken to hospital.

Apart from today’s set-back, Lenne was excited by today’s racing and the level of interest being shown in the GC32. “The weather is good, the wind is good and we have delivered a new boat.” He is also pleased to once again be sailing in his native France, especially now that there are more French sailors getting involved in the circuit such as Sebastiens Rogues and Col, plus another team that is soon to take delivery of a boat.

Racing resumes tomorrow with a further two races scheduled for the morning at 11:00 and another six in the afternoon starting at 2.00, when SPAX Solution’s crew will be joined by multihull legend Loick Peyron.