Racing for the GC32 one design foiling catamarans of The Great Cup continues next week in the south of France. Four GC32s will compete in their own class at Marseille One Design, a brand new event backed by the Ville de Marseille in the build-up to it being European Capital of Sport for 2017. In this, the GC32s will race alongside the new Diam 24 one design trimarans, plus the J/80, SB20 and Longtze monohulls.

Marseille One Design is only the second regatta the GC32 catamarans have competed in en masse, since they became ‘fully foiling’ earlier this year. With the fitting of T-configuration rudders and J-profile principle lifting foils, the GC32s now sail air-borne in all but the lightest conditions and are effectively smaller versions of the AC72/AC62 catamarans used in the America’s Cup. However in comparison with their AC big brothers, the GC32s have relatively larger foils making then more straightforward to sail for crews of average ability and with soft sails, they have none of the logistical hassles of the AC72/AC62’s solid wing rig.

Despite the large size of its foils, the airborne GC32 has proved blisteringly fast, achieving an incredible top speed of 37.9 knots on Lake Garda in July.

“It has been very hard work, but we’ve come so far,” says businessman Laurent Lenne, creator of the GC32 class and its circuit, the Great Cup. “Making a production boat fly is not a trivial piece of work. With two new owners signed up in the past two weeks and more to announce in the next few weeks, we are looking forward to having a great circuit in 2015.”

In particular Lenne is relishing the GC32s returning to his native country. “Being back sailing in France, and especially in Marseille, is going to be awesome.” At Marseille One Design his boat will be named after his Amsterdam-based company SPAX Solutions. His crew will be joined on Friday by French multihull racing legend Loick Peyron. 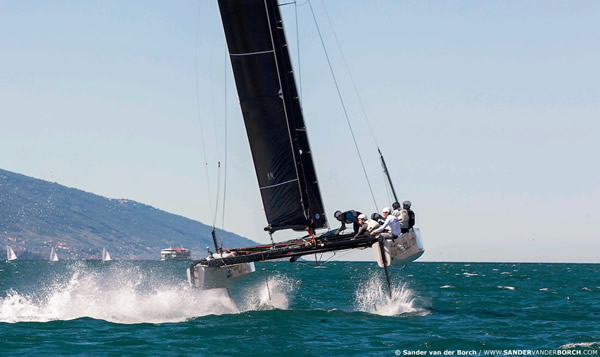 Alongside Lenne, the longest serving member of the GC32 class is Swiss former Olympic Star sailor, Flavio Marazzi and his ARMIN STROM Sailing Team. Marazzi admits he is still getting to grips with foiling his GC32 – a far cry from his Olympic keelboat: “For me I still need some time to get comfortable and to understand all the small set-up things – the angle of the boards, the height of the boards and everything. At the end of last year we felt good, everything was working nicely, but now it is a new game.”

Team SPAX SOLUTIONS and ARMIN STROM Sailing Team are being joined in Marseille by two new GC32 teams. Team Magic Marine is being led by top Dutch catamaran sailor and 2012 A-Class World Champion Mischa Heemskerk, who is sailing with a mix of Dutch, English and French crew.

Coming from the offshore monohull racing world is Frenchman Sébastien Rogues. Recently Rogues has been the skipper to beat in the Class40 and his yacht GDF Suez is favourite for the class’ leading event, the Route du Rhum, starting in November. However next year Rogues intends to focus on multihull racing and the Marseille event will be one of his first forays into competing on two hulls.

Main sheet trimmer and tactician on the GDF Suez GC32 is two time America’s Cup helmsman Sebastian Col, who is also currently the fastest GC32 helmsman having set the present record of 37.9 knots on Lake Garda in July, in 25-30 knot winds.

“It is a bit shaky, but it feels safe,” says Col of life at nearly 38 knots.  “It is quite impressive and I’m sure you can go faster.” Is 40+ knots possible? “Definitely. Maybe Marseille is the place, but the sea won’t be as flat as Lake Garda.” 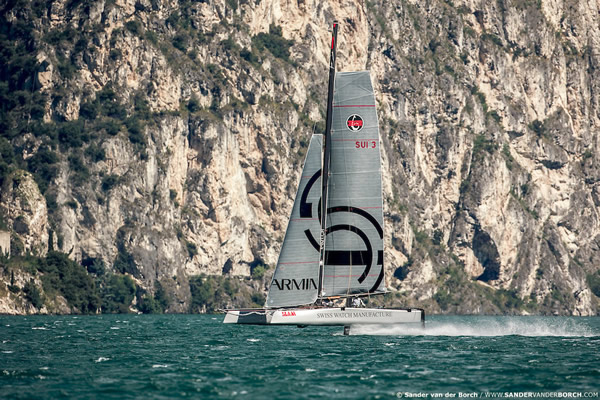 Also on board GDF Suez will be Gurvan Bontemps and Benjamin Amiot, two of the leading sailors on the GC32’s little brother, the 18ft Foiling Phantom. According to Col, in Marseille they will be racing with five on board for the first time as in 10-14 knots it is hard to handle both the foils and to gybe the genniker with just four. Prior to the event, the crew has spent five days training in La Baule.

“We will try to use our local knowledge,” says Col of GDF Suez’s prospects next week. “It is going to be the first time the boats will race in the sea. Fortunately the long term forecast is for light to medium winds.”

Flavio Marazzi concludes: “It will be interesting to see how the new teams handle the boat. Hopefully there will be some wind so we can get some more flying days in.”

>From Monday, 8th until Wednesday, 10th September, the GC32s will be undertaking speed trials. These will be followed over Thursday, 11th until Sunday 14th September, by fleet racing on the Roucas Blanc Rade Sud to the south of Marseille’s main city centre.