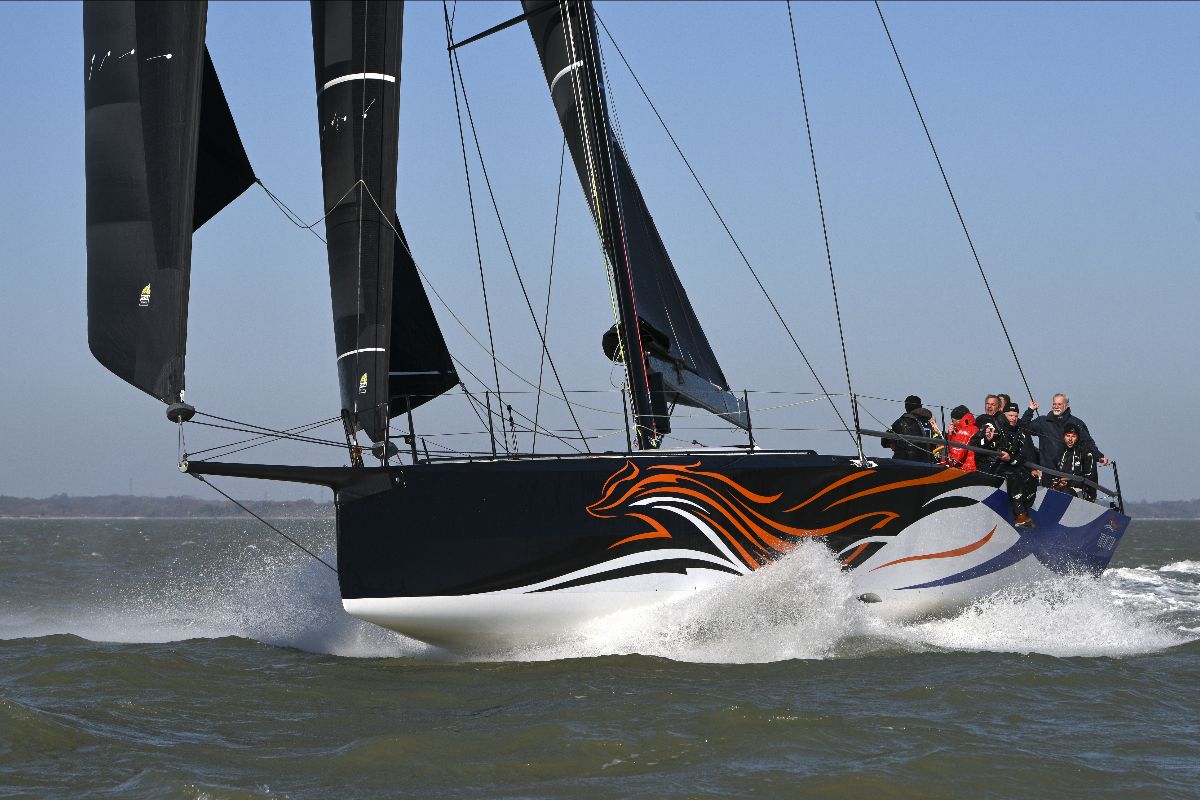 The first Infiniti 52 Tulikettu, designed by Hugh Welbourn, has been lost in the North Atlantic after colliding with an unidentified floating object.

It is the only 52 fitted with a Dynamic Stability Systems (DSS) retracting lateral foil, the same technology as used on Canova, Sailing Yacht of the Year at the 2020 Superyachts Award and the Quant 23, the 2016 European Yacht of Year.

It is with great sadness, that we must report an incident that occurred in the North Atlantic last week while Tulikettu was sailing from Cascais, Portugal back to the team base in Gosport, United Kingdom. All four delivery crew members survived the situation unharmed and have returned to the United Kingdom with their loved ones.

The yacht collided with an unidentified floating object (UFO) on Monday 18 April. The EPIRB was launched in the early hours Wednesday 20 April at 00.54 am UTC. Will Jackson, Tulikettu shore team manager, supported the Person-In-Charge via a continuous satellite connection. On Wednesday, April 20, at 10:45 am UTC, the entire crew was evacuated to an oil tanker that had been diverted to assist, and Tulikettu had to be abandoned at sea.

A salvage operation commenced on Thursday 21 April. A high-powered tug was sent to search the area with direct assistance from a spotter plane. The search efforts have continued 24/7 for the last seven days. The shore team has been working day and night, with support from MRCC Turku and MRCC Delgado. The multinational team has worked together producing daily drift calculations to assist the sea and air recovery specialists. After a week of intensive searching, hope of recovery has faded, and the Tulikettu Team stopped the search on Friday evening 29 April.

”We managed to sail almost 5000 nautical miles aboard our magnificent yacht, which was long enough time to conclude that the new Infiniti 52 exceeded all our expectations for the performance of the boat,” said Arto Linnervuo, Tulikettu Racing Team owner. “I will never forget the feeling when Tulikettu leaned on its foil and lifted herself above the waves for the first time reaching effortlessly boat speeds of 28 knots without help from surf waves, and the wind speed didn’t come even close to our boat speed back then.

“I have been through many sleepless nights as I have wondered what else we could have done to find our beautiful new beast. Very slowly my thoughts are beginning to look at the future, which gives me strength in this devastating situation. Loosing such a revolutionary vessel that had attracted so much attention and interest across the global sailing community is, after many years work, one of the most difficult moments in my life.

“But giving up on our goals and my dream to win something big together with my all-Finnish offshore racing team on the international grand prix offshore racing scene would be much worse. The more wet rags on the face, the harder I want to achieve our goals.

“A Formula One team would not stop racing after crashing its new car in the winter tests. Therefore, I have made the decision to continue our Team efforts as soon as possible in collaboration with Infiniti Yachts. In the meantime, the Team will continue to train and compete together with the other offshore racing yachts of our sailing club, Xtra Stærk Ocean Racing Society, including our Xp44 and JPK 10.30 yachts proven to be successful. We will explore the possibility of chartering other competitive boats. God damnit, we will be back!”

“The Infiniti 52 showed every sign of being the best yacht to have been fitted with DSS ever. Her behaviour and balance were impeccable and speed easy to find. Having spent so long developing and building the Tulikettu her loss is a significant disappointment, notwithstanding hull 2 is well underway and hull 3 is expected to start in a few weeks,” says Gordon Kay, founder of Infiniti Yachts.

“I speak for the whole team at Composite Builders and all of the people involved in getting Tulikettu on the water, how heartbroken we are to hear of the unfortunate accident with this beautiful yacht,” commented Brian McInnes from boat builder Composite Builders. “In its short life the boat’s performance had exceeded expectations! Unfortunately, we are seeing more instances of collisions with foreign objects at sea, and the effects this is having on the health of our oceans and the sailing community.

“We are happy that the crew are safe and hope to see Arto and his team back on the water very soon.”

“I was in total shock and saddened to hear about the loss of Tulikettu. The few times I sailed on the boat during early sea trials were truly exciting and she gave more than a few glimpses of her very impressive performance through a range of conditions,” said Sty Bannatyne, Tulikettu Racing team’s coach and Doyle Sails representative. “An absolute pleasure to drive and trim, Tulikettu was I think a genuine step forward in technology and performance for an offshore 52-foot race boat.

“I understand that Arto is very keen to be able to get back into a new Infiniti 52 as soon as possible. This is great news and completely understandable! I look forward to the opportunity to join him once again.”