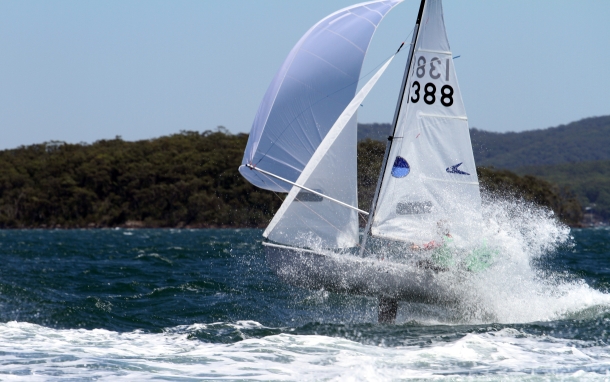 Richard Noone ofThe Daily Telegraph reported that a young boy was in hospital after becoming tangled in ropes when the Flying 11 he was sailing capsized at Belmont on Saturday. Sadly the boy did not recover consciousness and his life support was turned off on Monday.

He and another 11-year-old boy took the yacht out for a practice sail in Belmont Bay on Lake Macquarie when it somehow flipped in the mild conditions about 4.45pm.

Lake Macquarie Yacht Club general manager Alan Paterson said a fisherman in an aluminium dinghy noticed the upside down boat and a “distressed” boy on top. He told The Telegraph that the fisherman went to their aid and untangled the other boy who was trapped underneath before flagging down a much larger 12m boat, which had finished racing.

Mr Paterson said crew members aboard that boat commenced CPR as they brought him back to the yacht club at Ada Avenue where they were joined by a doctor who had moored following his race.

Paramedics arrived and conveyed the boy to John Hunter Children’s Hospital while his 11-year-old friend was taken back to the Belmont 16s club, adjacent to where they had launched the boat earlier.

The injured boy was wearing a flotation vest.

“There was no organised sailing, there was a couple of kids going out for a practice sail as I understand it,” Mr Paterson said.

Meanwhile, according to the ABC Online, Lake Macquarie sailing officials have moved to assure the community the sport is safe, after the death of the young sailor. “The New South Wales Police marine area command is investigating, and a report is being prepared for the coroner,” the report states.

The CEO of the Belmont 16-Foot Sailing Club Scott Williams told the ABC “it is a rare event”.

“Sailing is a safe sport,” he said. “Like all sports there are risks involved, and I think we can see that with the recent circumstances around Phillip Hughes in cricket. This is just a tragic accident.”

“On Saturday afternoon the conditions were ideal,” he said. “The lake conditions were benign, there were light winds so it had nothing to do with the conditions. Exactly what happened we don't know and, at this stage, that's for the coroner to determine what the events were that took place.”

Yachting Australia offers its thoughts and prayers to the family and friends of the young boy who passed away following a tragic accident at Lake Macquarie last weekend.

“On behalf of the Board and Management of Yachting Australia, we send our deepest condolences to the family and friends of the young boy, as they deal with this heartbreaking situation,” said Matt Allen, Yachting Australia President.

“Our thoughts are also with his sailing companion and family, and to those who assisted the two boys on Saturday, both on and off the water and support has been offered to them,” he added.

Yachting Australia is monitoring the situation in conjunction with Yachting NSW and the Clubs involved.