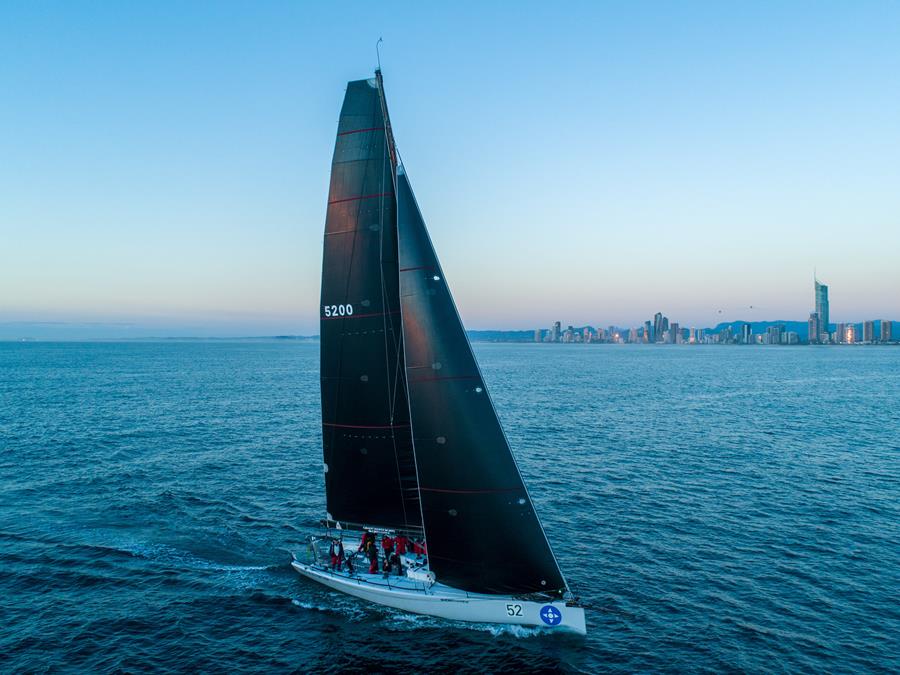 What was a jog for the first day and a half has turned into a stroll for the majority of the fleet still at sea in the 2019 Noakes Sydney Gold Coast Yacht Race.

On day three of the ocean passage that began in Sydney Harbour on Saturday 27 July, light south-westerlies have slowed progress for the 50 yachts yet to finish, while those crews already entrenched at Southport Yacht Club (who have one hand on a handicap victory!) quietly celebrate their good fortune.

Barry Cuneo’s TP52 Envy Scooters monopolized the top of the IRC overall leaderboard for much of the 384-nautical-mile race, the Cruising Yacht Club of Australia’s second most significant event behind its flagship Rolex Sydney Hobart Yacht Race. Much like the wind, the chance of the Queensland TP being beaten on corrected time is ebbing away.

Not long after finishing first TP52 behind the 60-footers, the skipper said, “The whole thing was a bit surreal; walking down the marina to our boat, the standard and number of boats was quite daunting. We were one of the first boats out of the harbour, and we never looked back.

“Our boat’s particularly good in 15-20 knot downwind running. The thing is most of the TP52s are very good in those conditions, which you can see in the results. We kept on the plane the whole way,” Cuneo, the newly appointed Royal Queensland Yacht Squadron Commodore added.

By 1200hrs 18 yachts were tucked up at Southport Yacht Club and Phillip Neil’s Hoek 78 Oroton Drumfire was among a group on the final approach to Main Beach, including Minerva, Wot’s Next and Richard Hudson’s Pretty Woman.

Drumfire crewman Lachie Paramour reported earlier today that the team resting below deck were enjoying the F1 Grand Prix on the big screen, and consuming way too many lollies. Like many, Oroton Drumfire had a near encounter with humpback whales, which are prolific during the northern migration: “We missed two whales by around three metres at sunrise,” Paramour said.

Race sponsor Sean Langman spoke today of his fondness for the event he will sponsor for five years. “Over all the years I’ve sailed up and down the coast, the Sydney Gold Coast race has always been my favourite. Noakes is focused on the commercial Defence area of our business but our roots are with sailing and we love seeing yachts in the yard – it’s where our heart is. We are delighted to give back to the sport.”

Speaking on finishing just behind the Oatley family’s 66-footer Wild Oats X, Langman joked: “We are happy with second over the line. As sponsor I don’t think you are allowed to win your own race!”

Monday’s forecast is S-SE 10 knots becoming variable below 10 knots in the evening and Tuesday is showing S-SW 10 to 15 knots tending S-SE 15 to 20 knots during the afternoon and evening, which is promising news for the tail-enders.