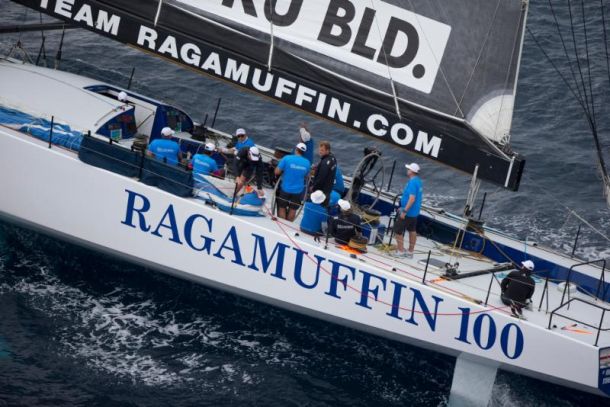 Ragamuffin 100 at the start of the Transpac. Photo Sharon Green/Ultimate Sailing.

San Pedro, CA – As the lead group that started nearly a week ago continue their speedy progress towards Hawaii, the influence of the tropical depression Delores is being felt by the trailing two groups that started on Thursday and Saturday in the 48th edition of the LA-Honolulu Transpac. This has resulted in very different weather conditions for each of the groups on the course.

In this morning's reports, boats in the lead group reported Northeast winds 15-20 knots, with higher gusts in squalls, and good progress being made to Hawaii, even if they are still looking for some sun. Paul Stemler's J/44 Patriot continues to lead Division 7 and the fleet overall, while Ron Simonson's SO44 Sleeper is leading Division 8.

Joel Young's Beneteau 523 Transformer reported “the last 24 hours is characterized by an endless platoon of squalls and light rain showers marching steadily across our course. When does the foulies-free weather pattern begin?”

The mood on Kevin Rooney's Santa Cruz 40 Kokopelli was a little better, helped by good fishing and food. The team said “We have been eating well, with Mary's Turkey Chili a couple of nights ago. Before that, Gordon caught a yellowtail and we gorged. Last night was a tasty dorado.”

In the middle group the wind was much further aft, and much lighter. Eric Gray's Santa Cruz 50 Allure is leading Division 5, sailing close to rhumb line, and reported 10 knots at 070°. Greg Slyngstad's J/125 Hamachi is also VMG downwind sailing with a position further north, and is leading Division 4.

In the group that started yesterday, there seems to be distinct differences in strategy: a group led by Syd Fisher's Ragamuffin 100 is heading north, while Wild Oats XI is leading a group going down the middle, with no one appearing to choose a southerly route… yet. This group also has the breeze aft, with mediocre pressure overnight, but improving later in the day.

Eduardo Saenz's TP 52 Detroyer reported 11 knots at 033° and an “uneventful night…except for the giant kelp island we hit and the half hour it took to get it all off the boat.”

But the pressure got better later, with Wild Oats navigator Nick White reporting “Right now we're averaging around 19 knots and aiming straight at the Barn Door – Hawaii. It's fantastic downwind sailing. You couldn't ask for much better…except we'd like some sunshine instead of heavy cloud.

“As it turned out, the forecasts proved to be completely unreliable,” White said. “We had to ignore them and do our own thing in the conditions we were experiencing at the time. It was really tough tactically, especially when we were trying to get around Santa Catalina Island and out to sea.”

More challenges lie ahead as navigators like White wrestle with the weather models and the realities on the course, but for one boat there is no longer any concern: Renaud Laplanche and Ryan Breymaier's Lending Club 2 have done it: with an unofficial time of 3D 18H, they have shattered the old course record…more details of their trip will be revealed soon as the team gets settled in Honolulu.

All boats have GPS trackers provided by Yellowbrick, where the boat's position, speed and heading will be continuously reported on the Yellowbrick website, with a 6 hour delay in the reports viewable at http://yb.tl/transpac2015.