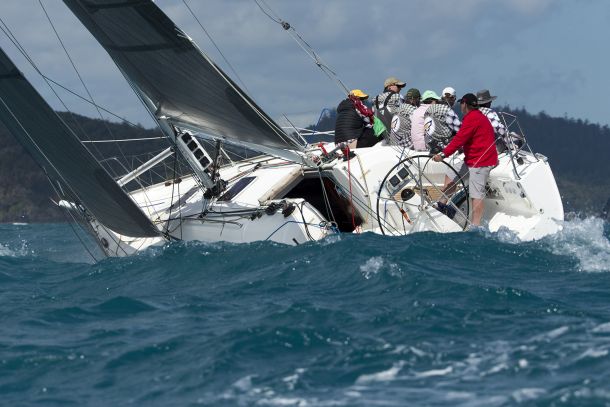 A weak ridge of high pressure hanging over Hamilton Island turned the wind gauge down and the colour metre up at Audi Hamilton Island Race Week on day three, Tuesday August 18, 2015. A warm sunny day with light south sou’easters put the IRC fleet into yet another phase – flat water and frustrating light air sailing.

‘The wind was blowing less knots than in Andrea Francolini’s curly hair’ was the comment of the afternoon, in reference to the Italian-born photographer who has captured the event for the past 15 years.

Winds averaged 6 knots out of the sou’east tending east and there were a number of whale sightings, one off Hamilton Island’s south east corner where a mother and baby completed a few lazy rolls but refused to breach for the expectant media.

Given the forecast, the regatta committee deemed the planned Club Marine long and medium distance races too arduous. Instead, divisions were sent off on various courses around the islands meant to make the most of the tide gates and bring everyone back to base with a result. The breeze was lighter than expected and PRO Denis Thompson and his team had to make decisions on the fly, shortening courses in three places to bring the fleet in before dark.

At the mid-way point of Yachting Australia’s IRC Australian Championship for the fleet of 40 contesting the series that is running alongside Race Week, positions remain unchanged from yesterday in IRC division A of the national title.

Secret Mens was right in amongst the tight bunch of TPs in today’s race then the breeze shut down. “It was frustrating,” admitted Boettcher this afternoon, “we were in the pack then Beau Geste got the new breeze first, then Ichi Ban, and Secret Mens sat there.”

Bob Steel’s newly imported Mat 1180, Quest, is back out in front in IRC division B, edging out the pink hatted Sydney crew on Vamp. Andrew and Pauline Dally’s DK46 from Middle Harbour, Khaleesi, has moved into third place.

Leading IRC division C half way through the pointscore is the Sydney based Summit 35 L’Altra Donna, skippered by Andy Kearnan and three points ahead of Todd Anderson’s Queensland Mumm 36 Corum.

“There’s lots of racing left,” said Kearnan, reluctant to big note their efforts so far. “This boat has always been a rocket ship in the light airs. If we end up with stronger breezes for the rest of the regatta we are going to have to work hard to maintain our position. It was a really tough day; there were two winds fighting each other and if you got caught in the middle……there were lots of re-starts.”

Matt Owen from the Canberra Yacht Club is the new IRC Passage leader from Laurence Freedman’s Espresso Forte. On the table for Owen and those gunning for top spot in the three other IRC divisions making up this year’s championship is the IRC crown, Hamilton Island trophy, prize of three nights’ accommodation at qualia, including airfares, and a VA Piper-Heidsieck Magnum.

“It was a light day and that suited our boat, we are used to light and variable from sailing on Lake Burley Griffin,” said Owen. “Our crucial manoeuvre was me going downstairs to have sleepy bye byes and when I woke up we were doing really well! Today called for a lot of skill and a bit of luck; we saw our first whale for the year which made everyone happy.”

Second in today’s IRC passage race was the sole Northern Territory boat Game Set, skipper John Mulkearns in his element in the light winds and tidal sailing so similar to his home waters. On the likely building winds he said, “15kts is ok, 20 is rough.”

If all goes to plan the 202 crews making up the second largest Race Week numbers in 33 years can enjoy a beautiful layday on the Whitsunday coast tomorrow, Wednesday August 18, 2015, before the tradewinds are forecast to strengthen as the high moves eastward into the Tasman Sea and the current weak ridge strengthens Wednesday and Thursday. There could be showers associated with the new breeze, likely to be S-SE 15 – 20kts.

For the layday some will opt to motor around to Whitehaven Beach and others will stay on the island for the various hot ticket functions including the Piper-Heidsieck lunch at the Bommie Restaurant at Hamilton Island Yacht Club or the beachside pool party at the main pool, 12-7pm, open to everyone.