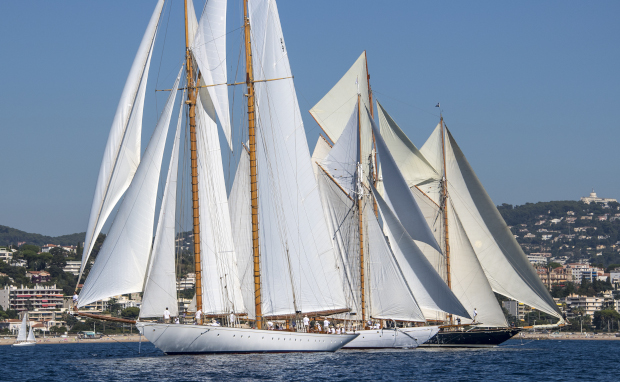 Magnificent historic sailing craft are due gather on the Bay of Naples on 7th May 2019 for four days of competition that will celebrate yachting from its golden era.

Created by the International Schooner Association in conjunction with the International Maxi Association, the first edition of Capri Classica is exclusively for classic schooners. Unlike other classic sailing events, it will play to the strengths of these giant maritime Stradivarii as well as celebrating the skills required of their crews and captains to race them.

This will be only the second time this group of classic multi-masted giants have gathered together since the 40th Régates Royales de Cannes, last September. It was then that their owners, plus those or their representatives from five other famous historic schooners gathered on board Puritan to found the International Schooner Association.

While the schooner class at Régates Royales de Cannes was won by the largest of the five, Elena of London, she, plus Puritan and Orianda are regular competitors on the Mediterranean classic circuit. The more widely travelled Mariette of 1915 is an occasional visitor and Naema only joined the circuit for the first time in 2016.

Among the unique schooner-orientated features of Capri Classica, perhaps most unusual will be the starts. While most modern yacht races start with boats jostling for position sailing to windward on a short line, at Capri Classica some races will resort to the ancient practice of starting at anchor with sails down. This was commonplace in schooner racing in the 19th century and even featured in early editions of the America’s Cup, an event won by schooners up until 1876.

“We are trying to innovate, but while also embracing the traditional way to race our yachts,” explains Simon Pandolfi, captain of Puritan and one of the driving forces behind Capri Classica. “Of course that means more emphasis is placed on the capability and experience of the crews and the captains, rather simply which is fastest or can sail closest to the wind.”

Starting from anchor will also be a natural handicap, as the biggest yachts could take up to 30 minutes to get underway, but will be faster under sail than the smaller yachts that could weigh anchor and be sailing in as little as 10 minutes.

Pandolfi continues: “The aim is to demonstrate that these schooners are not only beautiful. The winner will be the one who is most competent not just in getting off the start line quickly, but using the skills required for racing a schooner, skills that would otherwise be lost.”

Single races will be held each day on courses which will be schooner-friendly, given that these yachts all herald from an era when the principle was famously “gentlemen don’t go to windward”. With this in mind, the PRO will be able to choose from a variety of courses according to the wind direction and strength. If there is adequate wind, these are likely to be 30-40 miles long for example across the Bay of Naples to Ischia or Naples or around to the south of the Sorrento Peninsula and back to a finish line off Capri’s Marina Grande. “They won’t be windward-leewards,” states Pandolfi.

While Capri Classica is being hosted in Marina Grande, it will conclude in Marina Piccola on Capri’s south side. On Saturday 11th May the event will conclude with a pursuit race where the finish line will be off the Faraglioni rocks. Seeing the five schooners arriving in unison by Capri’s famous trio of weather beaten stacks will be a photographer’s dream.

Running alongside the event will be an active social program for both owners and crews. This includes a welcome cocktail party within the Schooner Village in Marina Grande on 7th May, an owners party in a private villa overlooking the marina, a crew party, plus a special event that is becoming a welcome schooner tradition, where the owners and their representatives are invited to a party on board one of the competing yachts.

After the first day of racing there will also be a marine craftsmanship competition between the crews to demonstrate their traditional skills be it ropework, wood carving, etc. The winning crew from this will all be equipped with sailing knives from manufacturer Extrema Ratio, Capri Classica will conclude with a prizegiving at the
Torre Saracena in Marina Piccola.

“The owners have a lot of expectations that because we have been talking about an event like this for so long,” concludes Pandolfi. “They are expecting something different, that’s new and more fun than what they’d done before. We are all excited by it. It will be a professionally run event, but we don’t want to lose sight of the fact that it is really about the owners, who are friends, wanting to spend time together, play together and have fun.”

For more information on the International Schooner Association visit internationalschoonerassociation.com