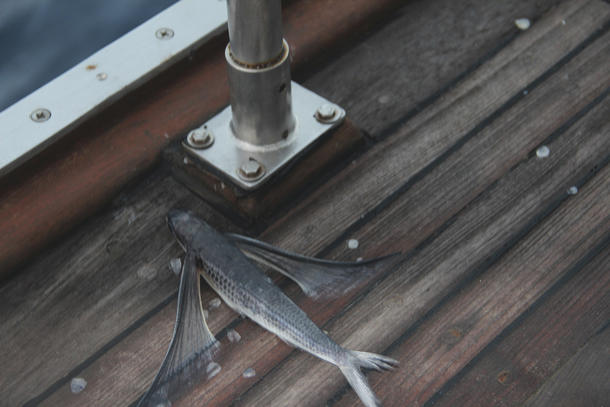 Sandy is the fisherperson on our boat. She has always loved fishing and the pile of fishing gear that was on board when we bought the boat is probably her secret reason for wanting this particular vessel.

Our steady donations in lures, hooks and swivels to the fish community since then could have kept us in fish n’ chips, three times a week for the rest of our lives and we intend living a long time!

But to be fair, her strike rate has gone up a lot since starting the passage across the Pacific. We can be rocking and rolling with an awful following sea and she will be sitting there, grumpy as hell, exhausted from the strain of hanging on all the time and too little sleep, when suddenly the rod will sing as the line runs out.

The transformation has to be seen to be believed. It is nothing short of miraculous. It’s as though Harry Potter has just wacked her with his wand and Sandy the ‘Fearsome fish slayer’ leaps into action. Her face lights up with the biggest grin you have ever seen and she jumps up, scrambles to the back of the boat and starts reeling in.

She will let that line run and wind back in for half an hour, arms aching, like someone possessed, until the fish is skipping along just behind the boat.

My job is to get it on board. Between the two of us we lose more than we land and part of the reason is our net is too short and our transom is high.

One Dorado was so big I took over the rod while she went on net duty. When she saw the size of it she got so excited she dropped the net overboard! Fortunately my gaff skills have improved and we still landed all 1.34 metres of it.

But we are enjoying a lot of fresh fish now. Occasionally we reel in a shark but cut them loose rather than risk fingers.

A few monsters have made the reel sing but snapped the line like cotton as soon as any attempt to play them was made. At anchor we get a few reef fish but also Rameros. It has a sucker plate on the top of its head and attaches to bigger fish or boat hulls. Once Sandy had one attach as she reeled it in. The tug of war was unbelievable and when it finally let go we could see our precious antifoul paint on his sucker.

Usually we catch Mahi Mahi (Dorado), but one night we lost a huge Skipjack tuna. In fact he was so heavy he left his gills on the hook as we were wrestling him up the side of the boat! Other fish will have dined well on our dinner that night.

Once on board they are quickly dispatched with a dash of alcohol in the gills. The Dorado is unique, its bright green and yellow colour drains away completely to silver with blue fins as they die, or it could be the alcohol! Sandy fillets them right away and the rocking and rolling of Wind Wanderer is forgiven for a while.

The first night is always fish and chips. The next is a fish bake, then fish pie and any balance goes into the freezer.

She has two lines going most of the time, one on a rod in a rod holder and the other is a rig she learned about from Leo and Ben, our Panama Canal gurus who swore by it. “Do you want to play fishing, or do you want to eat fish?” was their pitch, from memory.

Their system was so simple and foolproof you could just pull the line in and remove the fish, already devoid of fight, anytime you felt like fresh fish for dinner. Just like plucking it from a supermarket shelf.

The rig is a few metres of shock cord in a loop and firmly attached to the boat, then 50m of strong nylon, at least 80 kilogram breaking strain, a swivel, some trace wire and a cedar plug. We had never heard of cedar plugs but were assured the fish will be queuing up to cash in their fins to have a go at a cedar plug.

So we bought a couple of cedar plugs in Panama, real good looking ones with smooth lead ‘heads’ and fine tapered cedar bodies and a vicious hook sticking out of the end where the fins would be, if it was a torpedo.

I think they were both gone before we made it out of the Las Perlas Islands. Looking at the remaining bits of trace wire, we probably did not want those monsters on board anyway! I suspect one of them was probably one of the many logs that were floating by.

But the simplicity of the rig had struck a chord so lures were added. No success worth mentioning.

Then the bounty of the sea started providing. Every morning Sandy does a round of the deck to collect any squid on board, there often are a few. At the same time she tosses the flying fish overboard. They are smelly things with poor navigation. I have no idea how the squid get on board. They must be good jumpers.

The squid make good bait and she immediately started catching fish. The trouble is we run out of squid very quickly. I made the remark that it might be worth trying a flying fish and she had been wondering the same thing.

Well, as it turns out, Mahi Mahi like flying fish!

Who needs a $15 cedar plug when you have flying fish delivered airmail overnight? In fact now the word is out they are flocking, they are flying fish after all, to join us.

The other night I was on the verge of sleep when I heard Sandy shriek and a scuffling noise on the floor of the cockpit. One had flown straight in through the gap of an unzipped cockpit cover.

“Not my watch” does not cover flying fish invasion, apparently, so I ended up wrapping tomorrow’s bait in a paper towel and putting it out on the side deck. Sometimes she is such a girl!

The next night it was my watch and I was leaning up against the doghouse window, feeling drowsy and lost in Mark Twain’s meanderings down the Mississippi, when there was a loud ‘bang’ right next to my head. Once I had climbed back down from the roof I grabbed a torch to see what had broken this time.

You guessed it. There flapping on the side deck was the biggest, stupid flying fish we have ever seen.

I turned to Sandy, ”Madam, your bait delivery has arrived ….”