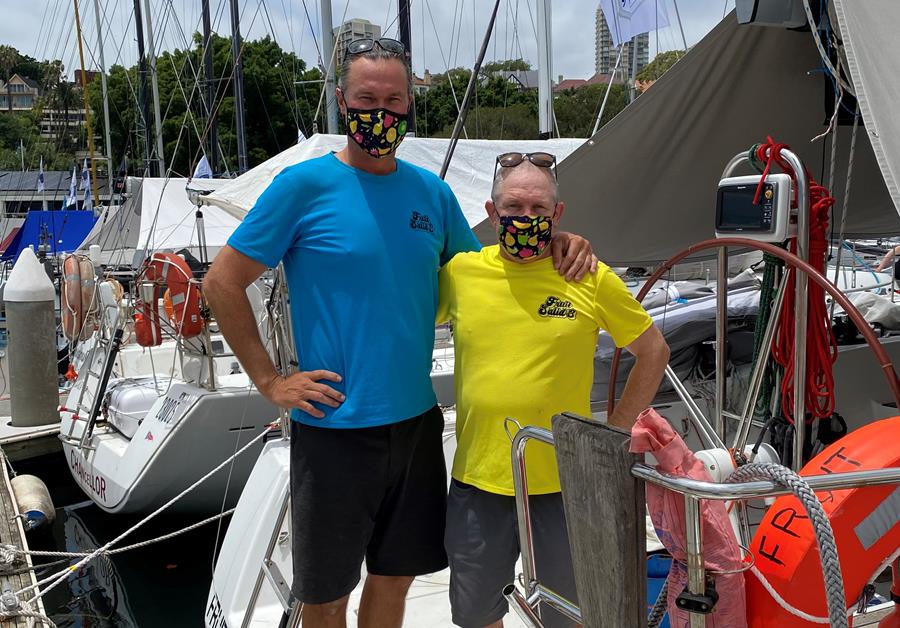 When Mark Drobitko bought the green and orange yacht he will soon sail in the Rolex Sydney Hobart Yacht Race for the first time, he and his crew were immediately smitten.

After the Queenslander purchased the Beneteau First 40 in Southampton, England in 2016, because of its colour, they thought it looked like fruit. So, they decided to name it ‘Fruit Salad’.

Trouble is, after they finished painting the name on it – albeit, over a few beers – Drobitko and his crew realised they had misspelt ‘Fruit Salad’ and had instead painted ‘Fruit Salid’.

As one of three boats he now owns, Fruit Salid 3 is what it is still named and will be seen as by all who watch the 2021 Rolex Sydney Hobart fleet when it sets sail at 1pm on Boxing Day.

Drobitko, 50, laughs off the blunder. In fact, in his own words, he “owns it”. His response to anyone who calls him out on the spelling error is to say: “It’s all a bit of fun. Life is too short.”

It has even happened since his arrival at the Cruising Yacht Club of Australia.

This will be Drobitko’s first Sydney Hobart as skipper of his own boat, and his second time in the event. He sailed in 2014 on Justin Brenan’s Lidgard 36 Alien, which finished 50th overall.

Fruit Salid 3 will also be one of 23 boats in the 93-strong fleet that will sail in the 628 nautical mile Sydney Hobart for the first time – a remarkably large number.

Pressed on what may be the cause for the large number of boats new to the race this year, Drobitko wonders if it is a positive sign of a new wave of participation coming into the race.

“Maybe there is a new guard coming through,” says Drobitko. “Maybe it shows a new interest in the race. It is such an iconic event.”

After Drobitko purchased Fruit Salid 3 in 2016, it was sailed to Australia and arrived in Queensland in late 2017. Fruit Salid 3 impressed throughout the long voyage.

Highlights of the passage were a first place finish in the 2016 ARC + Atlantic Crossing, Caribbean Sea cruising, Grenada Race Week, the Panama Canal and a transit of the Pacific Ocean.

Fruit Salid 3 was ready for last year’s Sydney Hobart, which was cancelled due to COVID-19. And because of Queensland quarantine laws, Drobitko sailed to Lord Howe Island instead.

A year on, the boat and crew are as ready, if not more so. Fruit Salid 3 is in tip top shape. The crew is primed and following strict physical distancing to ensure they avoid COVID-19.

“Our crew is more experienced than last year, so we are better prepared. There are some positives to last year,” he said.

As for Fruit Salid 3’s potential? Drobitko is realistic but believes his crew of nine can work well to produce her very best, pending the conditions that he says, “Might be right for us.

“We will closely monitor the First 40s because they are the same boat design. We’ll try do as well as we can against them,” he says. “Then we will focus on winning our division.

“It would be great to stand on the podium [in Hobart], but there are so many boats and factors in this race. There’s also a lot of professional sailors in the race too.

“We’re also mindful that it is not just the result that matters, but the journey there too.”