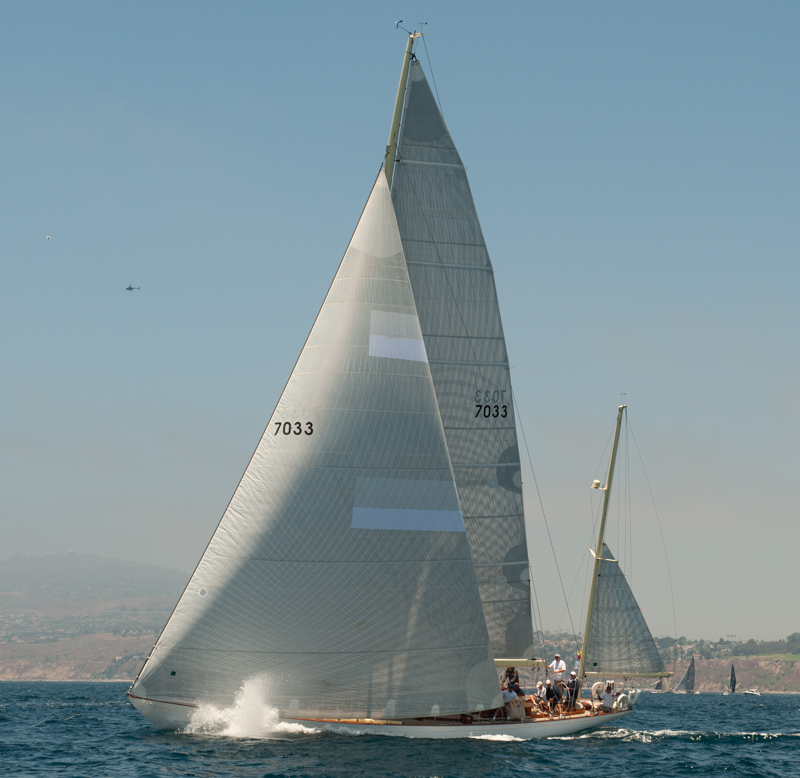 LOS ANGELES, CA – On a classic So Cal summer day with the sun burning through the morning haze to help along a building seabreeze, the first wave of 33 monohulls and two multihulls set off for Hawaii today in the 50th edition of the 2225-mile LA-Honolulu Transpac.

Race organizers from the Transpacific YC started the multihulls first, followed 30 minutes later by the large group of monohulls, which ranged in size from 33 to 67 feet in length.

The 67-foot Chubasco is one of Transpac's classic entries. The 1939 S&S yawl is campaigned in this race by a syndicate from Long Beach YC led by Tom Akin, Doug Baker, John Carpenter and Will Durant, who signed on an all-star pro-am crew for this race. Despite her age and grandeur, Chubasco was mixing it up among boat types many generations her junior, and was very much in the fray at a crowded pin end of the start line.

“We're really excited, really excited,” said Carpenter before today's start. “This is the culmination of a two year-long project restoring the boat and getting her race-ready, and now we're raring to go. Chubasco is the oldest boat in this year's race: she was first to finish 72 years ago and she's always finished first or second. This is her seventh or eighth Transpac and it's a historic event for the 50th running, and we're really hoping to do a good job.”

While this wave of the fleet started on the wind in a hazy but otherwise pleasant 8-12 knot southwesterly seabreeze to get them out past their first (and only) mark of the course at the West End of Catalina, veteran forecaster Ken Campbell of Commander's Weather explained what happens next.

“The High is spread out and weak,” he said, “and the pattern is shifted left, so everyone will have to dive south to get to the tradewinds, there's no incentive to go north.” He also said the current models indicate this pattern will likely shift towards being more “normal” by week's end.

It's only a few hours into the race and already written reports are coming from the race course. Cassidy Lynch sailing as only one of four crew on one of the smallest boats in the fleet, Kyle Vanderspek's Hobie 33 Aloha, still found the opportunity to write:

Elliott just asked me who I was emailing and I told him obviously our fan club. He's currently off watch and laying in his bunk. I'm not sure which is pinker, his crew shirt or his face. Yes, 5 1/2 hours in and he is already burned.

Right now we're cruising upwind at heading of roughly 220 with the wind consistently between 9-12 knots. Basically we're just trying to get the [heck] outtta dodge. Gotta be honest, the heel is not exactly cruisy but we'll take the gains.

So far we've seen a couple pods of dolphins and a sunfish. Lots of kelp too, especially as we got closer to the West End.

We enjoyed our burritos, they we're still warm, and now are trying to get into the watch schedule.

The whole crew says thank you again to all the family and friends who helped us get here, both in San Diego, Long Beach, and from afar.

Progress for boats on the course can be followed on the 4-hour delay YB tracking found on the race website , and daily position analysis videos from offshore racing commentator Dobbs Davis will be posted on most mornings during the race.

For more information on Transpac 50 and its history, events and sponsors, visit the main website at https://2019.transpacyc.com.