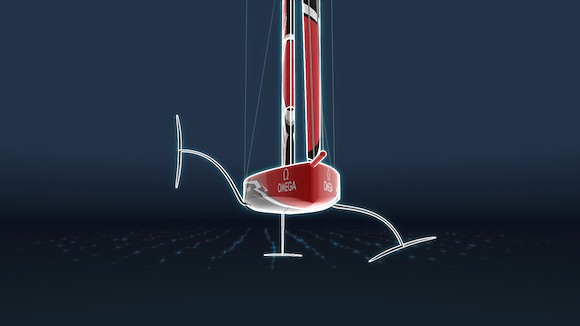 The AC75 design for the next America's Cup, revealed by Team New Zealand on Monday, has met with initial approval from two men who sailed on the AC72 and AC50 catamarans.

Tom Slingsby, who was strategist on the successful defence by Oracle Team USA in 2013 and is currently trying to find funding for an Australian challenge, posted this response on Facebook:

“Which is better? @emiratesteamnz have just announced their concept for the next America's Cup. My first impression is…. I like it. I think it will be fast, exciting and very difficult to sail which is a good thing for the cup.

“I do question whether it will better the AC50 performance which they are claiming but would love to be proven wrong. Cavitation onset will definitely be earlier from first glance. I also worry about the costs, it looks like an expensive campaign. Open design on the hull shape whilst looking cool, may be a unnecessary cost for something out of the water the whole race?

“All in all I think they have done a great concept. Hopefully it's as good as they are expecting!”

Team Principal and Skipper of Land Rover BAR, Sir Ben Ainslie welcomed the early announcement. “The Defender, Emirates Team New Zealand and the Challenger of Record, Luna Rossa have delivered a truly high-performance boat that will make the next America's Cup an incredible sporting and technical challenge.

“We look forward to the opportunity to consult with the Defender and Challenger of Record ahead of the final class rule being announced at the end of March. We can't wait to start tackling the design and engineering challenges in this new class.

“What we do know is that we're going to be foiling again, and that in the right conditions, this boat will be as quick as or quicker than the ACC foiling catamarans raced in the last Cup. The sport has gained a lot of new fans and this boat, delivered with a global circuit and high-quality free-to-air broadcast TV will cement their interest in the America's Cup and build on a very strong base.”

Land Rover BAR's new CEO, Grant Simmer, was in Portsmouth for the announcement and commented, “This new class is a real challenge for our design and sailing team. It's also a great opportunity. A new class of boat means a blank sheet of paper, and while we can use much of what was learned in AC35 about systems, foils and the associated design and engineering, there's also a great opportunity to take a jump ahead if we get the conceptual approach right from the start. This is a very exciting time for the team.”

Some of the questions being posed, and which no doubt will be answered when the full protocal is announced in March 2018, are whether a hull that is out of the water most of the time needs to be 75ft long and why, if the boat is as fast as the AC50 cats, there is a Code Zero when the boat will be sailing in apparent wind at all times. But the ETNZ designers are the world's leaders in foiling technology, otherwise they would not have won the Cup.

From the video, it appears that there will be at least 10 crew. Although the soft sails will require less hydraulic power than a wing sail, there will still be plenty of oil pumped to enable complex foil controls to operate. ETNZ CEO Grant Dalton has ruled out the use of cyclors (the cyclists who replaced traditional grinders on the winning Kiwi boat in Bermuda), but at least six crew will be doing nothing much more than grinding pedestals.

We're all looking forward to March and the final design rules.