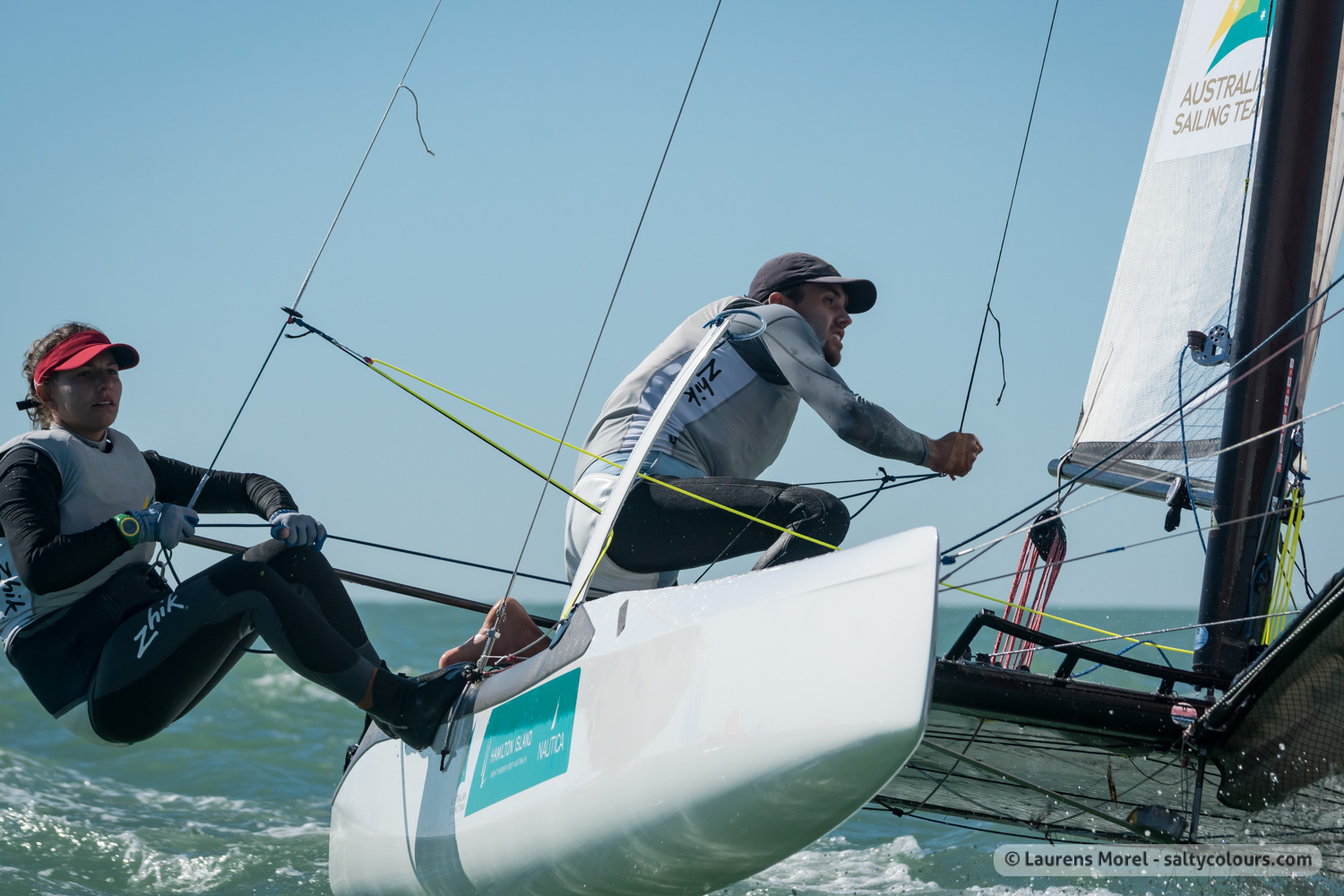 Racing at the 49er, 49erFX and Nacra Europeans begins on Sunday night (AEST) in Kiel, Germany with a strong fleet of Aussies taking to the water to compete against some of the world’s best across all classes.

A field of 98 49ers will contest the European Championship, with four young Aussie crews lining up in what looks to be a strong fleet.  West Australian David Gilmour teams up with Queenslander Joel Turner, in their second major international regatta.  All eyes will be on this young team, who won Kiel Week at the end of June.

“Kiel Week was our first major international regatta together,” said Gilmour.  “We were a little unsure how we would go, so it’s really good to know we're on the right track.”

Victorian brothers Will and Sam Phillips will also be another team to keep an eye on at this event.  They finished Kiel Week in third place, so will be looking to back that result up with another strong showing at the same venue.  West Australians Lachy Gilmour & Ryan Donaldson will also compete, along with Kurt Hansen and Jim Colley of NSW; and Dave O’Connor (QLD) & Harry Morton (NSW).

In the 49erFX, 68 boats will compete at this event, including four ‘up and coming’ Aussie crews.  Haylee Outteridge & 2012 London Silver Medallist, Nina Curtis team up again; along with Tess Lloyd & Eliza Solly of Victoria; Caitlin Elks & Hayley Clark of WA; and Amelia Stabback of NSW & Ella Clark of WA.

“Over the last few months we have focused on building a good squad of sailors with some new combinations of existing and new sailors to the group,” said 49erFX coach, Shane Smith.  “The newer members of the squad are showing they are making good gains and it has provided some close racing at home and we now have the opportunity to see where we stand on the world stage here in the Euros in Kiel, Germany.

“With 68 boats in the fleet it will be a big challenge as our first event in some time, but we’re looking forward to measuring up and continuing to develop each team.

In the Nacra 17, the European Championship will be contested in foiling catamarans for the first time.  25 foiling boats will contest the title, with Rio 2016 Silver Medallists, Jason Waterhouse and Lisa Darmanin lining up to try out their new boat for the first time.

This will be the first event the Aussies have contested since the Rio Olympics, as Waterhouse has focused on America’s Cup as part of Team Softbank Japan.  Following the America’s Cup, the Aussies have been in Europe working with team coach Darren Bundock on their new foiling Nacra 17, and will be looking forward to the first opportunity to test their skills against the fleet in the foiling boats.

Racing will also take place in the C-Board (old type) of Nacra, and 17 boats will contest that class championship.  Within this fleet, Aussies Pip Pietromonaco (Victoria) & Conor Nicholas (WA) will line up, along with Paul Darmanin & Lucy Copeland of NSW and Tayla Rietman of Victoria & Lachlan White of NSW.

The three championships running simultaneously will provide a good insight into the early preparations for teams as they cast their eyes towards Tokyo 2020.