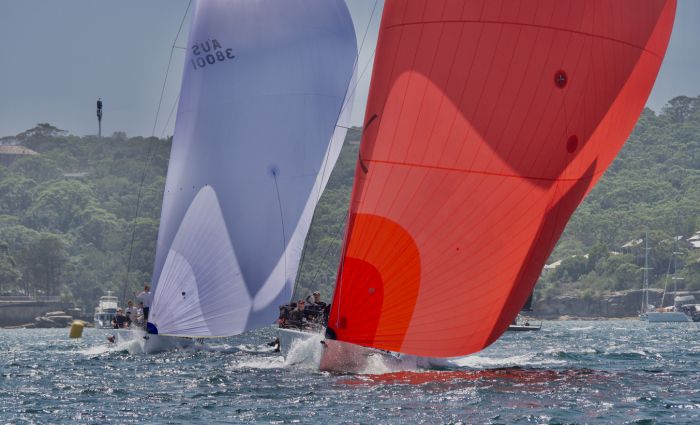 The MC38s are back at it and the new season began with fireworks, Lightspeed struck hard by Lazy Dog in a port/starboard incident in fresh conditions on Saturday February 1 and unable to finish the day, but ultimately returning to claim top regatta honours.

It was the one time the class opted not to use on-water umpires; a decision Australian president Shaun Lane says is a test case that won’t be repeated.

With owner Steve Barlow out with a shoulder injury, Lightspeed was helmed by James Mayo, best known as crew on the champion Etchells called Magpie, the current Australian titleholders and runners-up at the class’ world championship in 2019.

Mayo has had his eye on the MC38 class for a while and jumped at the chance to drive. “We trained on Friday in 26 knots which was a good learning curve. Over the course of the series I had to make sure I really focused on what the others, who know the boats best, were saying, and not let my instincts take over.”

According to the protest outcome, Shaun Lane and Quentin Stewart’s Lazy Dog, nicknamed ‘naughty dog’ after the Middle Harbour Yacht Club-run first act, failed to keep clear in a port/starboard and broke rules 10 and 14. They completed their turn at time but the jury imposed a much harsher penalty in the room, disqualification from race two.

“The bow of Lazy Dog hit our port side just forward of the last stanchion which meant when they disconnected from us they took all the lifelines with them, including the bow rail,” said crewman Daniel Turner of the incident. “It was quite a large impact as both boats were fully loaded. The Lightspeed shore crew worked in the scorching sun all afternoon and Sunday morning grinding carbon and getting the boat back together. The good thing about racing one design is there are usually parts available, so boats can keep racing.”

Lightspeed returned to the racetrack, The Sound area between North and South Head, on Sunday to complete three races under MHYC race officer Steve Tucker’s direction. Their scores of 2, 4, 3, added to Saturday’s 2 then average points for races two, three and four awarded by the protest committee, gave them the lowest score and the series win.

John Bacon’s Dark Star from the Royal Prince Alfred Yacht Club finished second by 1.6 points and third on the pointscore was Steve Proud’s Swish, a point off second. Lazy Dog finished Sunday boat of the day with results of 4, 3, 1, and fourth overall.

Two other protests were lodged then later withdrawn during the feisty weekend regatta.

Despite the banging and crashing Mayo was impressed with the class on his first outing. “They are all nice people and it’s close racing; things change so quickly, which I love. I really enjoy my sailing but I’m trying not to own too many toys, though I’m definitely going to have a think after this weekend.”

The next time the MC38s meet will be on Sydney Harbour for the 2020 Australian Championship hosted by MHYC March 13-15. “There were five race winners from six starters this weekend so a real mixed bag of results that shows anyone can win the nationals. Everyone’s geared up,” chief naughty dog Shaun Lane added.