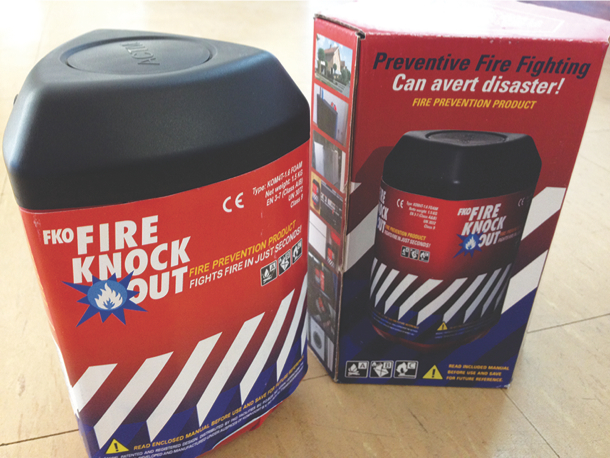 We all know fire can do devastating damage in a very short time.So why then are many of us reluctant to put a little more effort into fire detection and suppression equipment?

Personally, I would like to see any boat with a cabin in which a person could sleep or cook, have fire detection systems installed and maintained. It is not law in every state yet, as each carries their own set rules. But I would like everyone to at least make their own informed decision about their safety both from a personal and material point of view.

Damage caused by fire came home to me after a boat caught alight on a recent weekend.

This one occurred when they tried to start a second motor. Fortunately, this time, no-one was injured as the resulting fire did not cause an immediate explosion. Being attached to the jetty, escape was as simple as walking off the boat.

It does not take much imagination to picture the difficulties involved in either fighting a fire, or escaping this situation while on a mooring or, even worse, while voyaging!

I only use this example to remind us of how simply a fire can start and the devastation it causes on board a boat. In this particular case, they were petrol engines. I did not enquire whether the bilge blowers were used, as we know they should be prior to any attempt to start the engines, or poor maintenance was the issue. But that is another story.

I would like to talk about why many of us are almost overcome with tears of happiness as we skip down to the local chandlery after we realise we have another spot on the boat where we can fit an extra new navigation aid. We can stretch the budget just enough to purchase it, even though this could put the purchase of our fire safety gear back just a little further.

I am not suggesting we should not have our navigation aids, as Cruising Helmsman March 2014 edition showed groundings and collisions came in at numbers four and five behind lightning strikes, theft and personal injuries, in the top ten US boating insurance claims.

I am just wondering why we are so keen to throw thousands of dollars at navigation aids and the training to use them, when we quibble about spending a comparatively small amount of money on fire detection systems when fires and explosions came in at number six. The speed and devastation of fire surely makes it every bit as important to the safety of ourselves, our crew, our boat, and adjacent boats in the marina.

I have also heard, read and seen cases where owners have removed or disconnected a smoke detector because “it annoys us when it goes into alarm, even when we have only burnt the toast.”

This to me rings alarm bells! Have they forgotten that is its purpose and things can and do burn if and when we lose focus on our cooking?

Distractions are everywhere, accidents do happen, which is why things on stoves can and do catch fire. It may only have been slightly burnt toast in that instance, but could easily be something more significant in another!

A smoke alarm is a relatively cheap but dependable fire detection system. It gives us very early warning that something has, or is, about to catch fire. Which in turn gives us a much better chance to act and either extinguish a fire before it gets too big to handle or have enough time to escape to safety.

Incorporated in our fire safety plan, at the very minimum, we then need a fire blanket in the galley and fire extinguishers on board, correctly mounted and positioned. Plus, be familiar with the instructions so we know how to use it without having to refer to them when action is needed in order to save our boat. Without these, escape becomes our only real option.

There are many ways fires start on boats, but electrical shorts and cooking are two of the main areas of concern for cruisers. We often spend time living on board, which usually means the galley becomes frequently used, so let us consider this area first.

Let us forget about our boat for a minute and think about the safety of ourselves, our love ones, or our crew on board.

We typically have two exits out of a hull: the companionway and a forward hatch. The galley is probably the most likely place a fire could start, which in many cases is between the companionway and living areas and/or sleeping berths. If a fire starts and is undetected for a surprisingly short time, due to an early detection system not being installed or operative, the escape route of the companionway could very easily be cut off leaving only the forward hatch for egress.

Could we guarantee everyone forward of the galley would not have difficulty getting out of a forward hatch, perhaps through strength, fitness, agility or even reach?

Perhaps a restriction, like the dinghy for example, is sitting over the hatch, we could suddenly have a life threatening situation.

We can not smell smoke when we are asleep, so the above scenario is assuming we do manage to wake before being overcome by smoke, as our noses will not alert us to fire while we are asleep. Our ears however will, so again early detection by a smoke alarm will normally give very early warning and thus plenty of time to act or escape.

Electrical faults, including but not limited to low voltage wiring, is another major cause of fires in boats.

The danger here is that they can start at any moment, not just limited to a specific time of use. Again these would normally be picked up very quickly by a smoke alarm and, even if you are not on board, the activation of an alarm could alert a neighbour or passer by of a problem and hopefully save your boat. If the first anyone knows about a fire on board is smoke coming from your cabin, I guarantee saving it or, much worse, anyone on board, then becomes a very low possibility.

If your local chandlery does not carry 12 or 24 volt smoke alarms, they are available from many outlets including camping and hardware stores or online. They can be hard-wired into an onboard electrical system.

There are two types of smoke alarms: ionisation and photoelectric. But the photoelectric are considered the best for early detection and tend not to accidentally activate.

Most come with a ‘silent’ or ‘hush’ feature to enable the alarm to be shutdown for a number of minutes in the case of a minor or accidental activation.

Alternatively, if hard-wiring is not possible on your boat, a simple smoke alarm with the standard nine volt D battery can be installed.

Positioning of a smoke alarm

Because smoke initially rises and spreads along the inside of a structure, at its highest level positioning of a smoke detector should be as high as possible, usually fixed to the inside the cabin roof but not too close to a hatch or vent where airflow may direct smoke away from the detector.

I prefer not to locate one immediately above the galley if possible but perhaps the opposite end of the saloon area, in an effort to reduce false activation. It should be mounted in the same area as the galley however, with no bulkheads between the two that may slow the time smoke may reach the detector.

Remember the earliest possible detection is what we are after.

A little off the subject but no less important is the detection of foreign gasses.

Twelve and 24 volt battery off-gassing, carbon monoxide, liquid petroleum gas, paints and solvents are all potentially dangerous. As the name implies, CO and/or smoke detectors are good not only for fire detection but also in the detection of dangerous gasses.

In my opinion, the ideal position for the earliest possible detection of each is different and a better option would be a separate CO detector (or preferably an extra one) positioned below the level of the lowest bunk in the boat.

The gasses they detect are not only extremely toxic but could also be explosive, so their detection and removal is paramount.

Gasses that are heavier than air, LPG and other fuels for example, sit low in the boat and can not generally escape without some form of mechanical ventilation. So unless a system like this is constantly used, gasses can remain there at dangerous percentages. When you consider that a bunk is generally lower than any possible ventilation port for the bilge, we find we could be breathing these gasses when asleep without knowing it. Many of them can not be detected by sight, smell or taste.

There is plenty of information about these detectors available from the relevant government departments and online. Maybe any requirements for having these detection devices installed and maintained on our boats, really is for our own benefit.