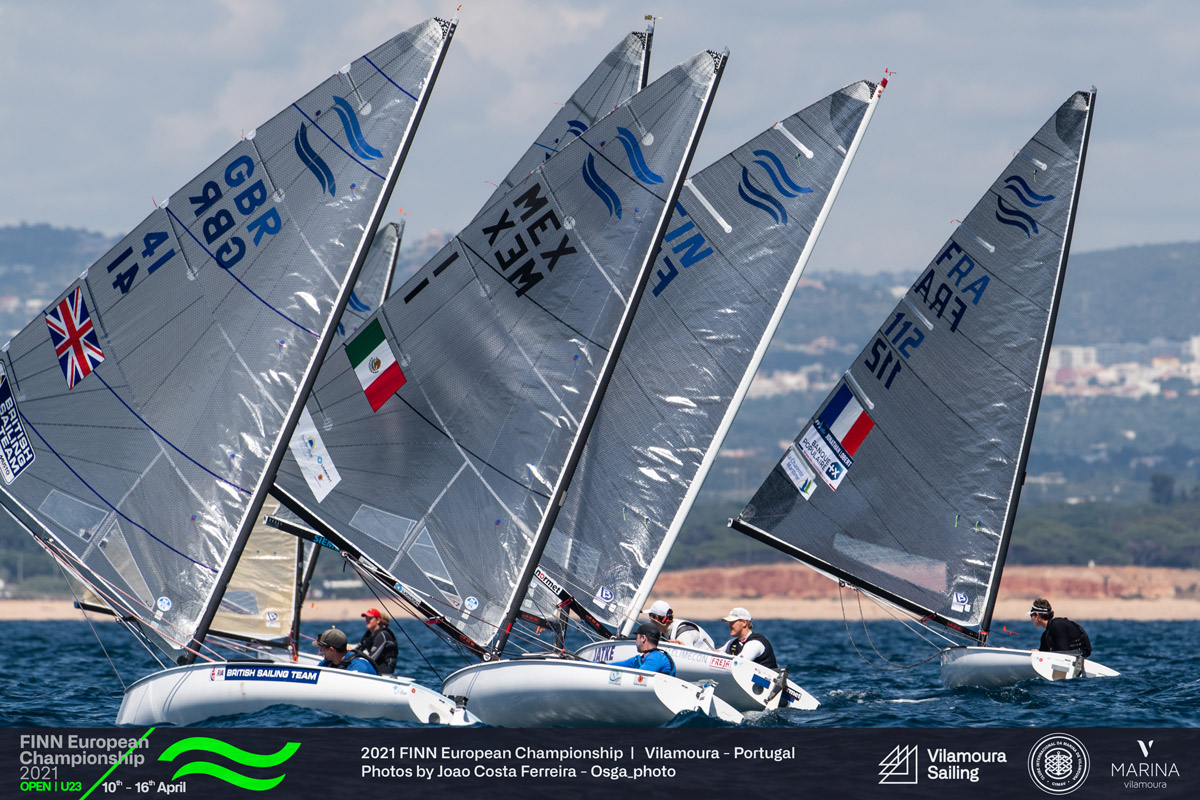 Hungary’s Zsombor Berecz opened his title defence at the 2021 Open and U23 Finn European Championship in Vilamoura, Portugal, with steady fourth and fifth places on a day when many favourites were hitting high scores. He leads overall after the first day from Canada’s Tom Ramshaw and Britain’s Henry Wetherell. The race wins went to Wetherell and Nicholas Heiner, from The Netherlands, on a tricky day of light and patchy winds.

After a slight delay to the start, the earlier cloudy skies gradually gave way to a sunny afternoon and a breeze that built from six knots at the start of Race 1, through to about 10 knots with Oscar raised for free pumping on the final downwind. However it then dropped for the second race with lots of ups and downs.

The fleet got away cleanly in Race 1 but it was clear there were some pressure differences across the course with the boats on the far left in less wind. In the end a 10-degree shift favoured those on the far right with Georgii Paches, from Ukraine, leading round the top from Deniss Karpak from Estonia, and Australia’s Jake Lilley.

Several boats made big gains down the left side while at the front Karpak led through the gate. There were more gains to be made out of the left side round the gate and at the second top mark, Wetherell emerged ahead, and with Oscar flag now up for free pumping, kept his lead down to the finish to take the win, while Lilley passed Karpak to take second.

The second race also got away first time in about eight knots, but the breeze was patchy again. It gradually became obvious that the left side had more pressure, with Heiner leading round the top from Waltteri Moisio, from Finland, and Panagiotis Iordanou, from Cyprus.

Heiner was soon clear ahead and extended on everyone to sail away for a comfortable win. Spain’s Joan Cardona, who rounded fifth, moved up to third on the downwind and on the second beat, several boats were making gains in the middle as well as the left.

However the leading group of Heiner, Ramshaw, Turkey’s Alican Kaynar and Cardona was a long way ahead of the fleet, finishing in that order, with Italy’s Matteo Iovenetti also in the mix for a while.

The U23 European Championship is currently led by the defending champion, Cardona, who sits in fourth place. While low on numbers here the young sailors have a huge depth of talent. In the second race of the day he was one of three U23s in the top five at the top mark.

Wetherell said, “The day started off light with a building breeze which made the racing tricky. I managed to get to the fresh breeze on the right in the first race, which was the major change and made some gains through the race to take the win. The second race was different with a long left shift and pressure, which I had to bail out to the right to cut my losses. It was a tough day out there and very tricky to put a finger on what was the next big change would be.”

With his main training partner in Auckland for the America’s Cup he said it was good to get the group back together. “Preparations have been short with Giles [Scott] and Ben [Cornish] returning from the Cup but we have had some quality training. It’s a great group to hang out with and also train hard.”
Heiner recovered from a heavy 35th in the first race of the day to win the second.

“It was a super tricky day with big leverages in the fleet and 1.3 mile beats and light pressure. There was a lot of separation, and I think that’s why there’s a lot a big scores in the fleet, including myself. It was really hard to see which side would pay. And with the big separation it’s easy to get it wrong, but some guys did well today to minimise the risks and be consistent. I definitely had a bad first race with a two-turn penalty on the finish, so that’s a race to discard. I did everything wrong in the first race.”

But he turned it around in the second race with a dominant performance.

“So then it was good to win the last race, I trusted my eyes a bit more and sailed consistent and fast. Eight races to go and the first two show how high scoring this regatta could be. The discard raises the pressure a bit but also the intensity and we know we can’t make any more mistakes, so it’s game on.”

Apart from Berecz, Ramshaw was the only sailor to get two top 10 places today.

“It’s great to have all the guys back together after not having a regatta for so long, so that was super nice. We had a light tricky day and I managed to have some good comebacks to finish to two great scores, so I am very happy with that. Hopefully we will get a little more breeze for the rest of the regatta, but all round it was a good day and really happy to be back racing with all the guys.”

In seventh place is Ondrej Teply, from the Czech Republic.

“I had a solid opening day with 6, 15. It was quite light and tricky wind, so it wasn’t easy to make right decisions. I managed to sail consistently and always move forward throughout the race and I am happy for that. It’s an interesting feeling to be racing again in a bigger fleet, and it’s nice to have it back. We have done a lot of good training with great group of sailors, so I think I am getting ready to show my best in Porto.”

A double U23 Finn World Champion, he represents one of 16 nations here who will be trying to qualify for the final European Olympic place in Porto next month.

“It’s a real shame for all of us losing the only Olympic boat that is made for anyone heavier. There are many good sailors right now that would be peaking in Paris 2024 or even 2028, but unfortunately their only hope seems to be taken away. Anyway, we all still hope that Finn will keep the Olympic status and we will have more time to enjoy this great class.”

Racing in Vilamoura is scheduled to continue at 12.00 on Tuesday.