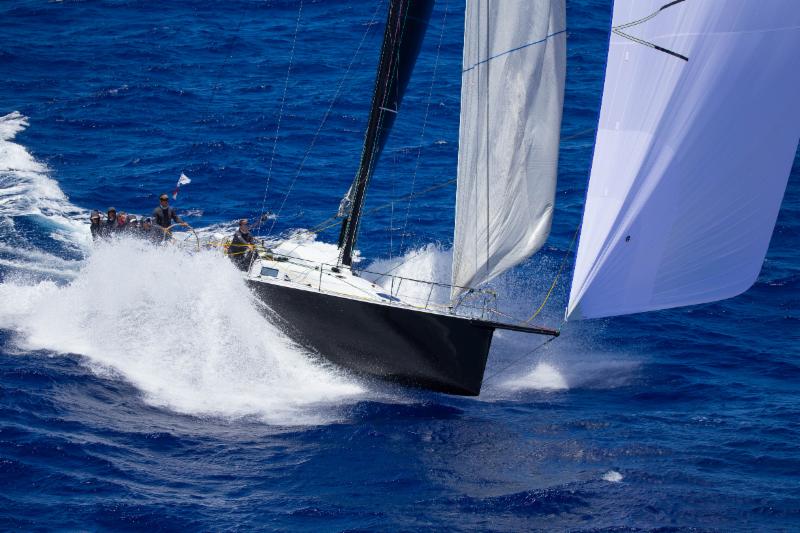 HONOLULU, HAWAII – With the conditions on the race course remaining perfect, the first of a large wave of finishers has started to cross the finish line at Diamond Head in the 50th edition of the 2225-mile LA-Honolulu Transpacific Yacht Race.

The crowd at Waikiki YC was so full of friends and family to greet Ho'okolohe, the berthing dock threatened to collapse. Buoyed by their spectacular finish at Diamond Head and finishing in their own home waters, the crew described their trip in glowing terms like “champagne sailing”, “best trip yet”, and “this boat has never gone so fast”.

Brigadoon beat Ho'okolohe to the finish line by an hour and 40 minutes, but trailed in corrected time scoring by about 14 minutes. However, currently Brigadoon is the sole finisher in the Corinthian division, where a trophy will be awarded to the team composed of all-amateur sailors who finishes with the best corrected time.

In corrected time, which is determined by the boat's Transpac rating multiplied by their elapsed time, the contest is incredibly close. At stake is who wins the overall King Kalakaua Trophy, one of the most prestigious in this race, which rewards the team who has sailed the course most efficiently relative to their rating. During the race the YB tracker system estimated the projected corrected time based on the rate of progress made every hour between scheds and the distance left to the finish.

Using this model, the Division 3 teams were on top most of this race based on their fast start on Friday, July 12th and the fast weather conditions on the course. Bretwalda 3 was an early leader in corrected time, but they rate the fastest among their closest rivals, two J/125's: Zach Anderson's and Chris Kramer's Velvet Hammer and Shawn Dougherty and Jason Andrews's Hamachi. So when the wind went aft, these two converged and appeared to even pass Bretwalda in corrected time.

With Bretwalda's finish time now known, and her corrected time established, its now possible to calculate the elapsed time window needed by the two J-boats to defeat Bretwalda and determine who will win the overall trophy: if Hamachi finishes before dawn at 05:40:50 Hawaiian time she defeats Bretwalda. But if Velvet Hammer finishes within 2 hours 45 minutes of Hamachi, she wins the overall award.

Asked to comment about this on arriving at Waikiki, Pethwick said, “We've been watching this, and its exciting to even think about the possibility. We'll see how it pans out, they were 120 miles back, but its also windy out there. We had such a great race, it was so different than our last race in 2015, we had a fantastic time.”

Bretwalda watch captain and sailmaker Wally Cross commented on the stories of broken sails on numerous other boats in the race: “We knew this race and the loads it puts on the sails, so we developed stronger A2's, and they held well. But the halyards didn't!” The team broke two spinnaker halyards and had to finally rig an external halyard to fly the masthead sails. “Its a good thing we finished when we did.”

A new wave of finishers is expected in the next 24 hours, with more and more appearing on the live 200-mile radius tracker system that updates every hour instead of the longer-range tracker that updates hourly with a 4-hour delay.