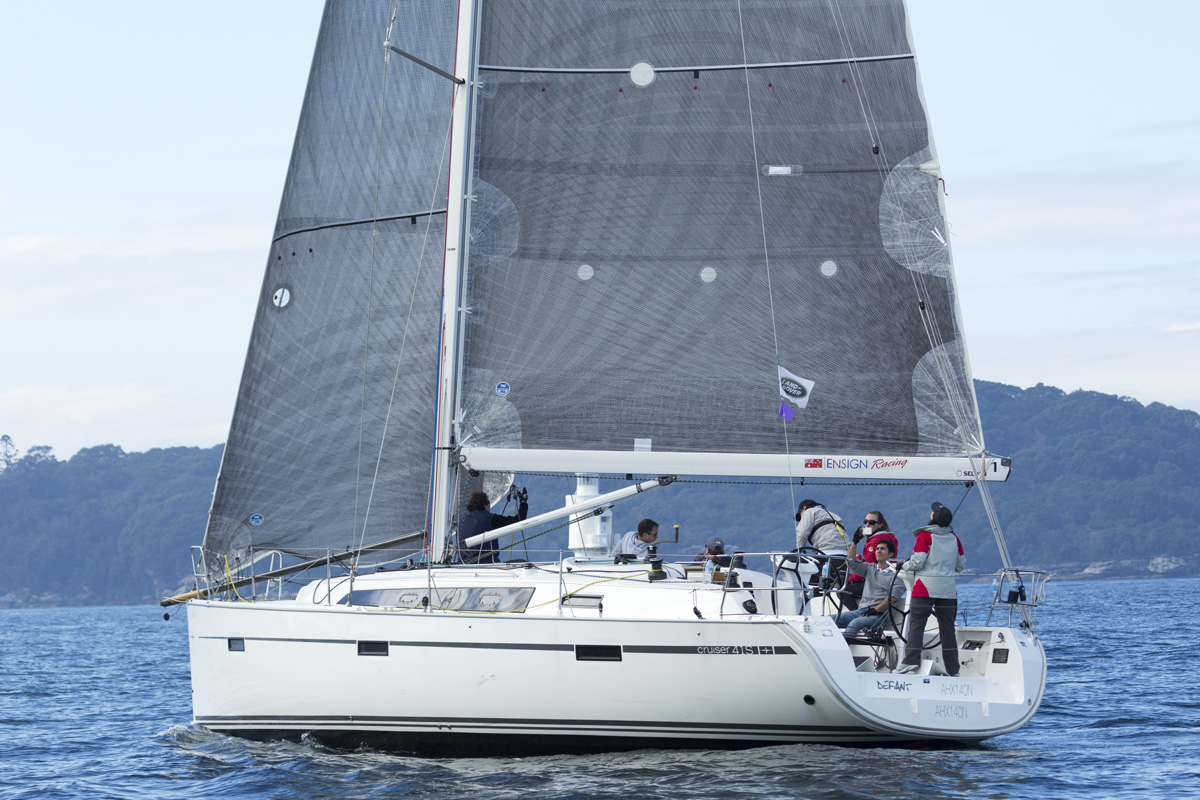 Following a closely fought battle in the third and final Ladies Day race of the Land Rover Winter Series, winners have been announced and all were celebrating not just their wins, but the end of the Series, at the Cruising Yacht Club of Australia late today.

The top two were tied on points going into the race, but the extremely light to non-existent breeze created difficulties for many, including Connors, whose second and a win in the past two weeks seemed a lifetime ago compared to eight place today.

Veteran offshore sailor Sue Crafer won the race at the helm of the Sydney 38, The Goat, to claim third place overall. Her experience and the boat’s suitability to light air, helped.

Dock commented: “Looking at the forecast, I didn’t think we could beat Arch Rival, but it turned out today was our day, not theirs. The day was extremely challenging. Our plan was to try and keep our rival behind us, and we did.

“The last one and a half hours from Shark Island to the finish was painful. Any other day you might have given up, but not with the series on the line. The crew did a great job and thanks to Phil for letting me steer his boat. The series was a lot of fun,” she ended.

Spinnaker Division 2 winner, Michelle O’Brien agreed. She helmed Peter Fallon’s Twilight Zone to victory, in a series that went down to the wire. Twilight Zone was a point behind Damian Barker’s Alpha Carinae, skippered by Dee Pollett, coming into the final race.

But today, Twilight Zone was on fire, O’Brien skippering her to a win, while Pollett finished eighth, ending her chances. O’Brien won the race by over five minutes from Peter Howes’ Sea Rug Hoo Ha, which ironically she steered to second place overall in last year’s series.

“We got the gun and the series, I’m so happy – that’s one for the ‘old girls’, said the 56 year- old, who was yet to discover she had also been drawn to receive a week-long Land Rover Range Rover Evoque experience, as she boat had to be taken to its mooring at Vaucluse.

“There was literally no breeze, then a little came in. I thought they would cancel the race. The only thing pushing us around most of the course was the current,” O’Brien said laughing. “Actually we started in a 6-8 knot westerly, but it died right after the start.

“It was great crew work on the boat – and I love this whole series – it puts adrenaline in the body,” said O’Brien, who sailed dinghies as a child, but has only been yacht racing for the past two years, after years of looking after her family.

“Peter (Fallon) got me back into it. We race at Vaucluse Yacht Club in summer, and then come to the CYC Winter Series.”

In Non-Spinnaker Division 1, Foreign Affair’s third place gave skipper Lisa Wilkinson the series by a mere point from Shaaron Walsh’s Trim, which won the opening and closing races, with a seventh in Race 2. Walsh was also lucky to be drawn to receive the lift stand launch and two free laydays, donated by the Noakes Group.

Defiant defeated the Jessica Barr helmed Shorething, a Northshore 38 owned by James Butler, for the series after Barr raced to second place, pulling up just one point shy for the series.  Hubcap2, the Oceanis 40 owned by Herman Heiligers and skippered by Anna Wilkens, finished third overall after retiring from the race.

Sapir said this afternoon, “I’m very excited. It was an extremely hard day. We had a good start in breeze and ran to Garden Island, then the breeze died and we had to fight our way back down the Harbour. We all stopped at Bradleys Head, and our main competition, Shorething, got going before we did. They got past us twice, and we caught them up twice.

“I want to congratulate all the women skippers and thank the race committee,” ended Sapir, whose owner was not aboard, having just returned from the snow. However, Billingham was chuffed to hear of Sapir’s victory.

The fleet started off Point Piper and competitors were somewhat inspired by the sunny weather, a wonderful way to end winter racing, even if the wind was lacking.

Weekly prizes throughout the season were awarded to first, second and third placegetters in each division and include exclusive CYCA Land Rover Winter Series merchandise.

The next major event on the CYCA’s racing calendar is the Land Rover Sydney Gold Coast Yacht Race, which starts on Saturday July 30 at 1pm.