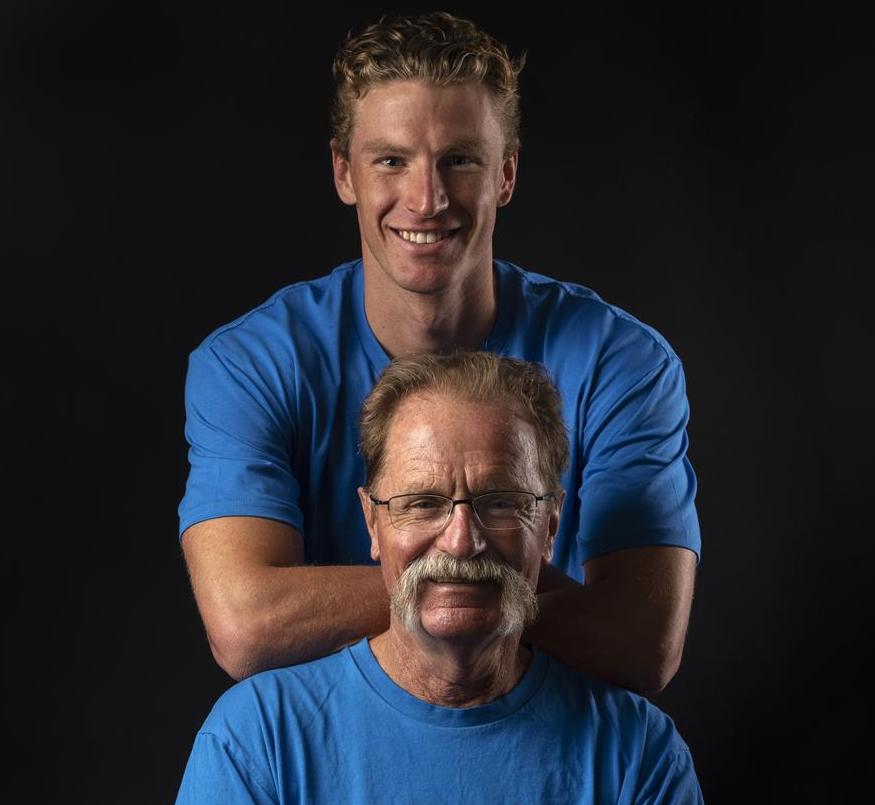 Michael ‘Zappa’ Bell was itching to be among those taking part in the inaugural Two-Handed Division of the 2020 Rolex Sydney Hobart Yacht Race and entered with his younger son, Oli.

Fortunately, the same yacht, Kayimai, is available this year, allowing him to enter with his older son, Matt. Zappa, nicknamed for his prominent rigging business of the seventies and eighties, says it is only possible because of the generosity of Kayimai’s owner, Rob Aldis, who is doing the race fully-crewed on his DK46, Khaleesi.

“The only reason we are here is because Rob said, ‘You can take my boat’. Peter Byford has bought into the yacht since last year. They are two lovely men who are very supportive of Matt and I.”

Twenty-six year-old Matt is a top performer in ski paddleboarding in Surf Life Saving events, including the Coolangatta Gold.

“So here we are, two blokes on a borrowed big boat,” Michael says of the Azuree 46 he adapted for two-handed sailing with rigging mate, Mario Ruel. “Mario was on Kayimai’s crew with me in the 2018 Rolex Sydney Hobart.”

Kayimai is one of 18 boats sailing two-handed in this year’s race. At 14 metres, she is the largest in the division and is normally crewed by 10 people.

Zappa is a very experienced sailor about to tackle his 13th Sydney Hobart, while Matt is a race rookie: “I sailed with Dad to New Zealand a couple of years ago though, and the last three months we’ve been sailing once or twice a week,” Matt says.

“I used to be the bowman, then Father Time caught up with me, so I’m in the afterguard these days,” he said, conceding, “It will be handy having Matt with me – the rigger and the nutrition conscious fitness fanatic – it’s a good mix.”

The pair’s first serious offshore race was the 172 nautical mile Cabbage Tree Island Race in early December. They finished third over the line and sixth overall in the Two-Handed division.

“That was a brutal race and it really showed Matt’s nature as a calm person with endurance,” Michael said. “He’s a stayer. He was enthused too, even though we had issues. We broke some gear. It was a learning curve.”

Matt says: “The first 12-15 hours were good. We were pretty comfy. The first bit of the way back was OK too, but then it got tense and nerve-racking, so we just focused on getting back in one piece.”

In 2020, Michael took navigation classes from Adrienne Cahalan. “Matt and I did another session this year. It went well. Adrienne is a calm and gentle person. She was very patient, so we were able to learn a lot,” he says.

Matt is gaining yachting experience from his dad, but on the flip side, his expertise in the gym means father is learning from son.

“We go two to three times a week to a gym. Matt has his heart in my health,” Michael admits.

Their boat roles will be split down the middle. “We have an unusual watch system. We’ll decide who needs rest and when during the day. At night we’ll do two hours on and two off.”

Their race expectation, Michael says, is to do their best. “We had decided to go flat out but changed our minds after breaking gear in the Cabbage Tree Island Race. We’ll use our brains and do as well as we can without breaking gear.

“I think we should finish in the top half of the two-hander fleet. Disko Trooper_Contender Sailcloth is the favourite in my mind. Salt Shaker and Eora will be hard to beat. We don’t know the form of the interstaters, but some do a lot of two-handed racing.

Matt adds: “I’m very competitive and so is he. All the ski paddling and training I’ve done over the years will help tremendously. To finish and to do it safely is important, but I want to give the rest a run for their money. I’m nervous but excited for the race.”

“It’ll be a major achievement to sail into Hobart with my son,” says Michael

That sentiment is echoed by Matt: “We’re pretty close, Dad and me. We don’t know what will happen in the race, but I reckon it will bring us even closer.”

Michael finishes: “A Tasmanian mate, Geoff Watchorn, died this year. He did the 1983 Sydney Hobart with his Huon pine yacht, Cascade. We’re going to sprinkle his ashes on the Derwent as we head to the finish.”