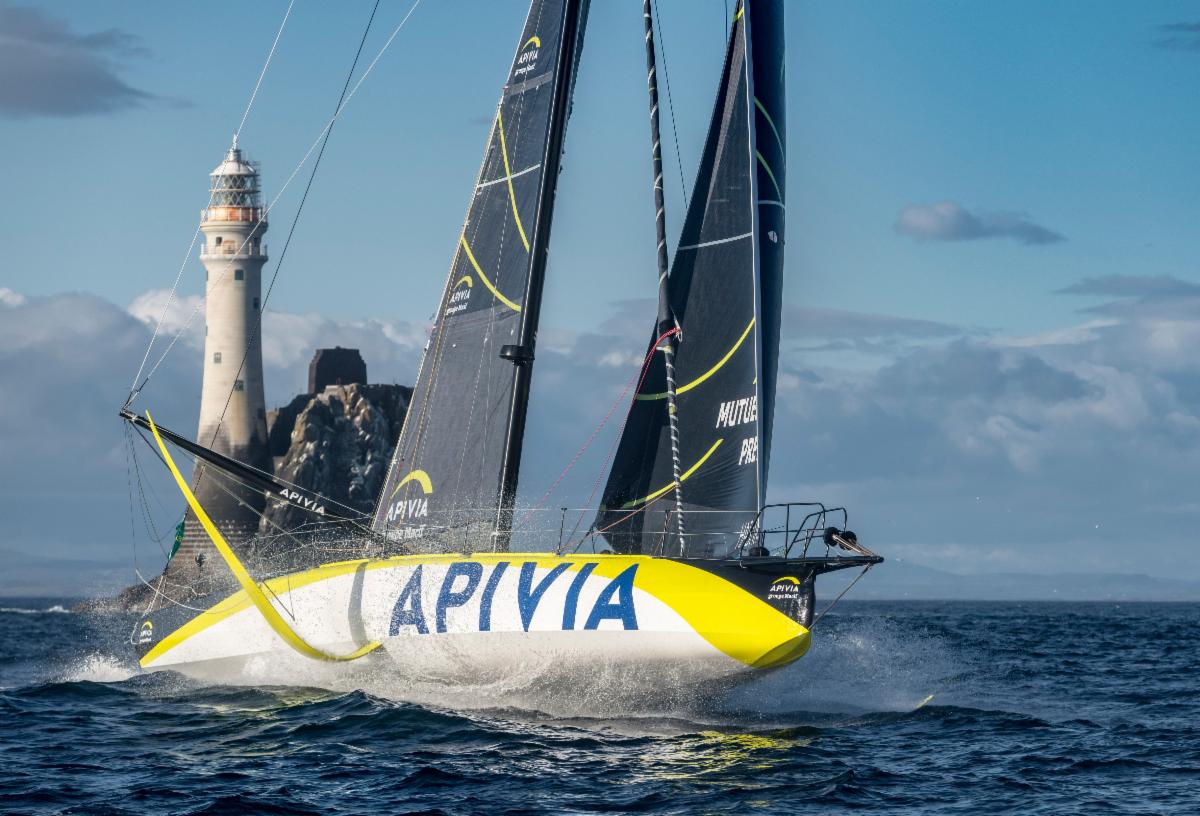 Double-handed French sailors Charlie Dalin and Paul Meilhat have won the the 13-strong IMOCA fleet in the Rolex Fastnet Race on the yacht Apivia.

This came as some small vindication after Dalin suffered victory slip through his fingers in this year’s Vendée Globe after he was first home, only to lose the top prize when Yannick Bestaven and Maître CoQ were awarded a time compensation.

Dalin, an anglophile having studied at Southampton University, enjoyed the Rolex Fastnet Race start, seeing old friends as his IMOCA milled around the Solent before the start. Once the gun had gone on Sunday, the foil-born Apivia leapt into action, and compared to her other 60ft IMOCA rivals looked like an 80 footer. Part of this was down to development work since the solo round the world race.

“We have new foils and some new sails. You have to keep these boats evolving to stay at the top of your game,” Dalin explained. Passing the Needles, sailing upwind so fast they were flying, Apivia had already pulled out a two mile lead in the IMOCA class.

While the Ultimes led the charge south across the Channel, Apivia led the IMOCAs but went even further towards France before tacking. This was because, uniquely, they managed to link up a series of benefits – positive tide at the Alderney Race, then a wind shift and then more positive tide off Brehat. “There was a very small window to get the combination exactly right. Our timing was perfect,” said Dalin. Their tack north was timed so that not only did they lay the west side of the TSS at Land’s End, but could stay on course to lay the Fastnet Rock.

Amazingly, at the TSS Apivia converged with the ClubSwan 125 Skorpios, a boat more than twice her length. The two boats then match raced across the Celtic Sea to the Fastnet Rock, Apivia doing an impressive job to keep up. “That was good,” said Dalin. “It was a shame because if the wind had been maybe 15° left and 2-3 knots more we would have overtaken them for sure. At 60° TWA we were faster.” Such are the performance gains of the new generation foilers.

However this was not to last. After rounding the Fastnet Rock 49 minutes astern of Skorpios and cracking sheets, the big boat sped away. The remainder of the race for Apivia was a complex case of playing tides and staying in the best breeze. This involved initially hugging the Cornish coast before ducking south of the Casquets TSS.

The trickiness of the situation in the Channel, from Bishop Rock on, was best demonstrated by the boats astern. When second placed IMOCA Jérémie Beyou and Christopher Pratt on Charal passed Bishop Rock at 1340 BST yesterday they held a 125 mile advantage over 10th placed HUGO BOSS.

By 0500 this morning huge compression in the fleet had occurred and HUGO BOSS had closed to 28 miles of them. As a result, a busy morning is expected in Cherbourg with the bulk of the IMOCAs, the multihull leader under the MOCRA rule, Adrian Keller’s Irens 84 performance cruising catamaran Allegra, and some of the IRC Zero frontrunners all due.

Generally this morning, the Celtic Sea resembles the M25 with bulk of the IRC fleet either approaching or exiting the Fastnet Rock.

Overnight suffering in the same compression in the Channel, the compatriots, the VO70 I Love Poland and VO65 Sailing Poland, lost their grip on IRC Zero. In their place this morning is David Collins’ Botin 52 Tala ahead of Jens Kellinghusen’s Ker 56 Varuna and Richard Matthews’ new speedster, the CF520 Oystercatcher XXXV also featuring. This morning the bulk of IRC Zero is past Bishop Rock and back into the Channel where the leaders are mid-Channel passing Start Point, and currently laying the Cherbourg finish where they are due later this afternoon.

Runaway leader on the water in IRC Four is David le Goff’s JPK 10.10 Raphael, flying the flag for France in place of regular winner Noel Racine. Significantly Raphael is also leading under IRC Four corrected time, having rounded the Fastnet Rock at 0400 this morning. The Pinteaux family’s JPK 10.10 Gioia is in the mix as is Vincent and Jacques Rigalleau’s Sun Fast 3200 Enedis and Harry J. Heijst’s S&S 41 Winsome as they head out for their return journey back across the Celtic Sea.

The door is set to close on the next Fastnet Rock roundings as a NNE-SSW orientated front moves across the fleet causing the wind to back into the northwest and lighten behind the front, creating slow spinnaker conditions for those returning from the Rock. It does however mean a faster leg for those already in the Channel who are boosted by 25 knots of reaching conditions.