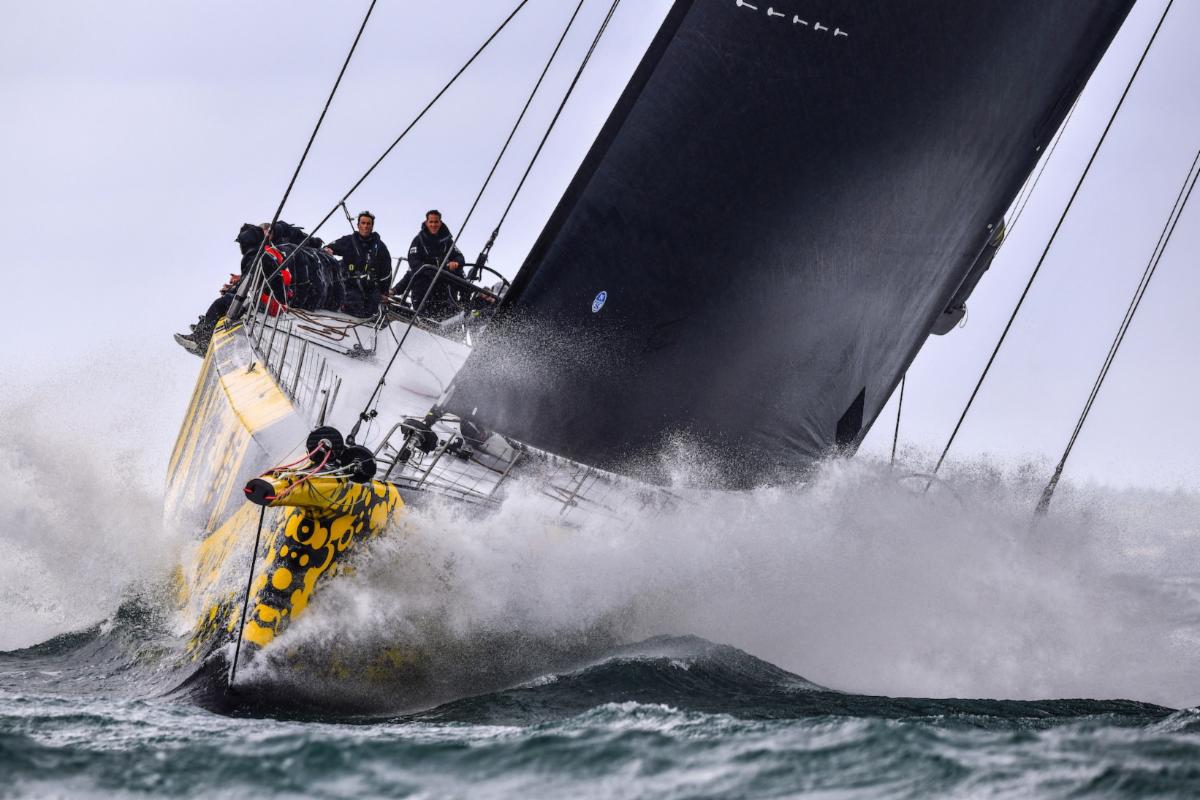 Due to this year’s mostly upwind conditions being more ‘typically Rolex Fastnet Race’, even the massively fast Skorpios, was unable to better the record monohull time to the Fastnet Rock of 26 hours 45 minutes 47 seconds, set in 2019 by George David’s Rambler 88. Skorpios’ time was 30 hours 38 minutes 43 seconds.

Skorpios rounded just astern of the final Ultime trimaran, the Jacek Siwek-skippered elongated ORMA 60, Ultim’emotion 2, but of more concern was a boat less than half her length nipping at her heels. Although racing outside of the IRC fleet, Charlie Dalin and Paul Meilhat on the 60ft IMOCA Apivia have done a phenomenal job leading the IMOCA fleet since they charged out of the blustery Solent 24 hours ago.

Approaching the Fastnet Rock, the talented Frenchmen, both past class winners in this event, were leading the IMOCA class, 35 miles ahead of second placed Charal, the defending IMOCA champion, sailed by Jérémie Beyou and Christopher Pratt.

In the MOCRA multihull class, American Jason Carroll, aided by his all-star on board cast of round the world and Olympic heroes on Argo, was leading on the water and this evening was on her return journey from the Fastnet Rock, half way to the next turning mark at Bishop Rock, broad reaching at 22 knots. However nearby and going in the opposite direction towards the Fastnet Rock was the MOCRA class leader, Adrian Keller’s 84ft Nigel Irens-designed racer-cruiser catamaran Allegra.

Allegra’s Australian skipper Paul Larsen, the fastest sailor in the world following his escapades with Sailrocket 2 nine years ago, was pleased that they had survived the harsh conditions of the first 24 hours, even though he wasn’t repeating his antics from the 2019 race when, racing doublehanded with Vendée Globe heroine Pip Hare, they had found themselves leading the entire monohull fleet on the first night.

“It was pretty fruity last night, but we are all good,” Larsen reported. “Obviously, we have a bit more of an asset to manage in those rough conditions, but we chose the right side of the course, so I think we are in a good position for what’s to come. We had everything stacked in the main saloon, which made it easier, pitching over the waves. We only had about 28 knots last night, but the heavy rain made it very hard for the drivers.”

Earlier Allegra passed west of the Land’s End Traffic Separation Scheme just astern of the IMOCAs Charal and Arkea Paprec. “Our routing is a bit weird – it has us cracking off at 65-70° TWA to Kinsale and then beating up to the Fastnet, so we are going to stay more towards the rhumb line and go fast at the mark and just see how we go.”

Off to the east of Allegra, Robert Gwozdz’s Sailing Poland was leading the other VO65 round the world boats on the charge north across the Celtic Sea. “We are going well against the other VO65s,” commented Dutch round the world race legend Bouwe Bekking, who is racing on board. “Yesterday afternoon we had sometimes gusts of 33-35 [knots] but in general it was about 25-30. And then last night, the breeze eased in the evening when the sun set and we changed firstly to the big jib and then during the night we had 25 knots, so we just reefed the main in and out. You know how it is, you go to the corner and the wind is on the nose. It should be forbidden to sail upwind!”

Despite coming direct from Copa del Rey MAPFRE, Bekking had had little chance to rest. “I haven’t got out of my foulweather gear yet!”

While Sailing Poland was leading the VO65 competition, her compatriot, the Polish National Foundation’s VO70 I Love Poland was further up the course leading IRC Zero under IRC, her crew including British Figaro sailor Alan Roberts and Volvo Ocean Race sailor Martin Strömberg.

In the Class40s, there was disaster this afternoon when one of the favourites, Axel Trehin’s Project Rescue Ocean dismasted on the approach to Land’s End. No one was hurt and she has successfully put in to Penzance to effect repairs. This has left Luke Berry’s 2019 winner, Lamotte-Module Création leading the class from Tales 2, the sole Botin-designed Class40, now campaigned by Italian Andrea Fornaro, albeit with Antoine Carpentier’s Courrier Redman on the ascent.

From onboard Greg Leonard’s Kite, Vendée Globe skipper Miranda Merron was enjoying the conditions this afternoon. “Right now, it is nice and sunny with 16 knots and we are just racing up the east side of the TSS off Land’s End. The routing reckons that way is shorter, otherwise we have to put in two extra long tacks. The wind is further left than we thought.”

“It is very nice after yesterday, which was not so nice, with gusts of 35 knots and pretty bouncy. We were pleased with where we were until we had to crash tack to avoid a foreign warship which refused to acknowledge our presence.”

Behind them, the IRC Two frontrunners were approaching Land’s End this evening, following IRC One’s up past the TSS. While France usually dominates this class, at present Tom Kneen’s JPK 10.80 Sunrise, including a RORC youth crew, is a nose ahead of Ross Applebey’s Lightwave 48 Scarlet Oyster.

“It’s has been fairly upwind, a bit bouncy, but we’ve sailed smart and kept the thing in one piece which has been really good,” said Applebey. “It would nice to be somewhere other than fully upwind at some point, but we are not sure how long it will be before we start reaching anywhere! We are trying to keep Sunrise in sight. We are sailing pretty well and are pretty fast – there is not much more we can do.”

One well travelled race boat, Scarlet Oyster took yesterday’s big conditions in her stride. “There was a lot of rain which was pretty unpleasant for the guys,” Applebey continued. “We have had everyone on the high side with only three people down below at a time. It has been pretty tough. Fortunately, there is less water coming into the boat now!”

In IRC Three, Alexis Loison and Guillaume Pirouelle’s JPK 1030 Léon is back in front of the Sun Fast 3600 Fujitsu British Soldier, the front runners in the class just past the Lizard late this afternoon.