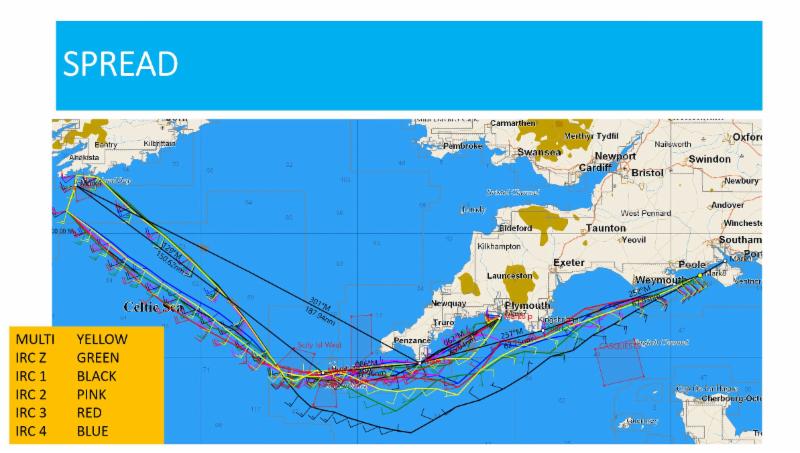 Whether to go inshore or offshore, how long will it take, will it be a big boat or small boat race, how to handle the powerful tides and will I need an anchor and an umbrella – the answers for this year's Rolex Fastnet Race, starting off Cowes, are profoundly different.

All depends on whether you are on an Ultim trimaran or one of the fastest monohulls like Scallywag and Rambler 88, or on Assent, the Rogers family's well-travelled Contessa 32, or one of the 390 or so boats in between.

In essence, the forecast for this year's race is starting Saturday at the beginning of the ebb tide, in an unusual south-easterly breeze (rather than upwind in the normal prevailing south-westerly), blowing up the eastern Solent, but then doing what the weather Gods alone will decide in the westerly Solent, it being in the lee of the Isle of Wight.

According to Rolex Fastnet Race meteorologist, Libby Greenhalgh, overnight the most significant change in the forecast is that the south-easterly here is looking more established, although perhaps more easterly making for a dead downwind start and still light in the westerly Solent.

“The exit is faster, so the routings have got about an hour faster,” Greenhalgh says.

Over the first night for the leaders, or well into Sunday for the tail enders, the crews will have to negotiate a 'transition zone' that will see the wind drop before filling in from the south-west, a scenario that may benefit being north (in search of thermal breeze close to the coast) or offshore and south (to get to the new gradient pressure first), as always, also dependent on the state of the tide.

“Faster boats will tend to dig further south towards the Casquets TSS and will be the most southerly,” continues Greenhalgh. “For everyone else it will be of more rhumbline or just south of the rhumbline route.”

In a 'typical' Fastnet Race, the choice between going west or east of the TSS off Land's End is significant.

However earlier in the week the only way to go was west, maintained Greenhalgh. However this has since changed with the easterly route opening up for the slower boats.

The good news is that after this the scenario becomes more straightforward with a reach across the Celtic Sea to the Fastnet Rock and back to the Scilly Isles, in south-westerly or west/south-westerly winds and in pressure that will vary between 15-25 knots according to the timing.

At present, it seems very unclear if the overall prize will go to the smallest boat in the race, which will get held up least in the transition zone or one of the bigger boats. However across the fleet crews on the fat-sterned reaching machines are looking smug.

Scallywag navigator, Miles Seddon, said they expect to meet the beginning of the cold front, marking the transition zone, early on Saturday evening.

Then they'll be off: “We'll reach off towards the Rock into increasing pressure and round it in 20 knots and come back in 20 knots and it will free off for us,” Seddon said.

As to whether this is enough for SHK Scallywag to beat the monohull race record of VO70, Abu Dhabi Ocean Racing, of 1 day 18 hours and 39 minutes, is another matter.

It will be close: “If it all goes swimmingly well, we should be just inside of it,” maintains Seddon, who says this year could be a 'big boat race' given that they are likely to see the strongest conditions in the Celtic Sea.

Among the other hottest big boats will be the 70 footers, including Peter Harrison's Sorcha, which in a previous life won the race twice as Niklas Zennström's Rán II.

Among her former winning crew is veteran offshore navigator Steve Hayles, who reckons that an IRC Zero boat could win overall this year but rates a VO70 such as David and Peter Askew's Wizard (already winner this year of the RORC Caribbean 600 and Transatlantic Race 2019) over their Maxi 72.

“In the two races we won we were on the wind the whole way to the Rock. Right now my personal fear is Rambler 88, the VO70s or even a quick 50 footer. After the unusual south-easterly, it goes light and if they get through that in reasonable shape, then it is reaching to the Rock and back and the windier it gets, the better it is for them. But there is a lot of subtlety in it.

The first day remains a big unknown and even a thing like cloud cover could make a huge difference.”

Another well-practiced boat competing at the bottom end of IRC Z is the Ker 46 Lady Mariposa which this year alone has competed in the RORC Caribbean 600 and the Pineapple Cup from Miami to Montego Bay, Jamaica.

Navigator, Andrey Yakunin, believes: “I think right now everyone is anxious to find the limits of the transition zone. From there it will be pretty straightforward to the Rock and back.”

As to whether or not Lady Mariposa is enough of a weapon reaching, Yakunin says that generally they do well if they can sail to their polars. “We have taken quite a bit of take way from the Pineapple Cup and the RORC Caribbean 600 and adjusted how we use our sails. I think we are okay reaching as long as we can get some decent speeds.”

“I did quite a bit of pre-race analysis and whenever an IRC Three or Four boat does well it is because they just make it through the tidal gate at Portland Bill,” says Bomby.

“Normally you are upwind through there, but we'll be straight line sailing. There appears to be more wind in the south where the transition is also shorter, but then you end up more upwind anyway. So our route will take us quite close to the Casquets and we'll be offshore for the transition, then tacking and getting lifted.

“After the transition we'll be fully upwind, pointing at Penzance but then eventually getting lifted. That will be quite a tricky thing – when you start getting the new breeze filling in. The more west you get, the quicker you'll get through it, but the chance of sailing extra miles because you overlay is quite high. That will be a critical part of the race.”

For boats in this size range the crossing of the Celtic Sea will still be a reach but in a more moderate 12-14 knots. Fastrak XII's routing suggests a time of 3 days 12 hours.

The lowest rated boat in this year's Rolex Fastnet Race is the Rogers family's Contessa 32 Assent. “We should do 120 miles/day or five days, which is pretty slow,” admits Simon Rogers of the yacht design/builder dynasty sailing, with brother Kit and their respective eldest children Hatty and Jonah, both sailing their first Rolex Fastnet Race. “The first two days look quite good for us.

“We are hoping the bigger boats will get stopped in the soft stuff in Lyme Bay on the first night. Then we have to cross the transition zone somehow- so there do you go offshore and look for the first gradient or a little bit of thermal activity, depending on where we get the tide turns. But the reality is that when the tide turns, we'll be anchoring…

“Then we get quite a decent westerly to beat up to Land's End. It looks like we will get a little bit of south and the wind will go right and on day three or four it will rise which could favour the little boats. I don't think we will be competitive under IRC but I do see the little boats doing well this race.”

Assent is still equipped for the voyages into the ice made by her previous owner and she is around 700kg 'overweight' and although she has a Code 0, she otherwise only has a small jib as a headsail.

Daughter Hatty observes: “We need 15 knots with the small headsail. The most wind I reckon we'll see coming back. It is going to be a race of two halves but once the transition happens it will be pretty stable. We need to be in on Thursday night because the wind is forecast to shut off on Friday morning.”

Greenhalgh is betting on a well-sailed boat at the bottom end of IRC Two: “Otherwise the faster boats obviously, if they are not too sticky in the slow stuff, will do alright in terms of having good breeze going across and coming back with the frontal system.

IRC Z could also be in with a shout, but they have to do a big banana around the transition. IRC Two will do less distance and less time in the lighter wind.”