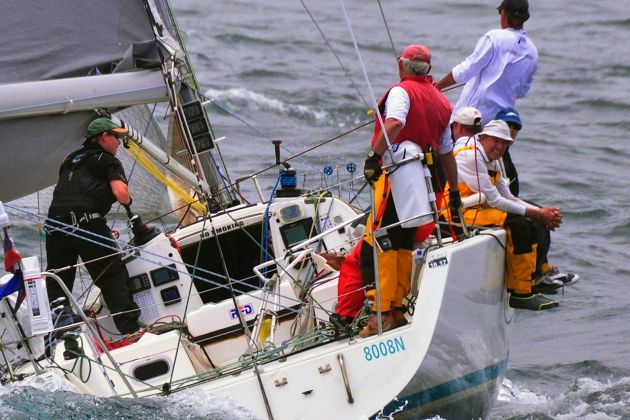 True to the forecast, a 15 knot southerly breeze had built to 20 knots by the time the Club Marine Pittwater to Southport fleet set off at 1pm on Monday January 2, 2017 from a long start line to the north of Palm Beach headland.

Doug Coulter’s Rogers 46 Shakti won the clean start and led the fleet into choppy seas at a blistering pace in what is shaping up to be a fast dash north, riding on the back of a southerly front that swept through Sydney this morning.

Three and a half hours later the Lake Macquarie entry was off Newcastle and had already covered 40 nautical miles, giving them an average speed of 11.4 knots. Closest to the front-runner was Phil Arnall’s Corby 43 Anger Management from Newcastle and the largest in the field, David Suttie’s Peklejus, a Radford 50 sailing for the organising club.

Based on current speed Shakti is capable of setting a course time of just 30 hours for the Royal Prince Alfred Yacht Club’s traditional New Year ocean race that will finish off Southport’s Main Beach.

Immediately after the final race and weather briefing at RPAYC on the start morning, Arnall said they were anticipating a 370 nautical mile downhill race ahead of 20-25 knot southerlies, then a sou’easter for the final leg to Coolangatta. “I don’t want to make excuses early but we like a little bit of upwind. We are all looking forward to a good downwind tussle with Shakti though, we are very good rivals with the Lake Macquarie boat,” Arnall said.

The Bureau of Meteorology’s race forecast is holding firm from two days ago, southerly winds turning sou’east for the first 48hrs, peaking at 25 knots, and heavy showers on the NSW Far North Coast while further south should experience a gradual ease in wind strength on Wednesday and Thursday.

Le Billet’s tactician Steve McConaghy said this morning, “It’s not the quickest boat off the breeze but it’ll be comfortable and there’s a great bunch of people on board, including the six youth sailors. Downwind Hobart, downwind Southport…what have I done to deserve this?” McConaghy posted this morning.

The Yacht Tracker is up and running showing position (line & handicap), speed, bearing plus other information for each boat on a continual basis – go to http://yb.tl/PS2017