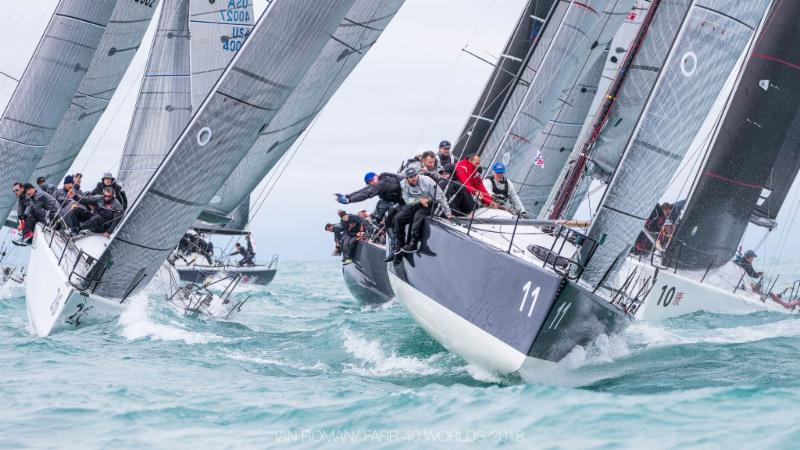 CHICAGO, IL (October 6, 2018): Patience paid off for Day 1 of the Farr 40 World Championship Day 1 in Chicago, Illinois. After a brief shoreside postponement, the fleet headed out for steep waves and winds of 15-20knots. The northeast winds brought in the standard cooler air with storms threatening on the horizon.

Chicago Yacht Club's Leif Sigmond and Marcus Thymian's, Norboy, leads the Corinthian fleet only two points ahead of Gordon Ketelby's ZEN. Consistency has proven key for Norboy as they raced the season with the same crew for the NOOD, Mac, Verve and, now, Worlds. “I almost wish we weren't leading the Corinthian fleet after the first day; I think it makes it a little rougher,” said Sigmond. “I think we can win these regattas by being consistent and not trying to knock the ball out of the park every time; we want some nice doubles and triples. We're just trying to get on base and score.”

Alberto Rossi's Enfant Terrible set the tone early on Day One with a finish extending several lengths ahead of the fleet in Race One. “The fleet is so similar that the situation changes quickly,” said Rossi. Unfortunately, in the second downwind of Race Three, a windward-leeward penalty with Plenty caused Enfant Terrible to tumble two points while the four-time World Champion moved into first.

Hometown favorite Helmut and Evan Jahn's Flash Gordon 6 was noticeably absent from the leaderboard, but made a comeback in Race Three of the day when they dialed in a solid start to take off with their first win and top three finish of the event. The move was much needed as they jumped from sixth to fourth in the standings tied at 16 points with fellow Chicagoan, Norboy.

The pre-worlds favorite, Wolfgang Schaefer's Struntje light was consistent throughout the day with significant gains on the downwinds. Their only downwind struggle was due to a shredded spinnaker in Race One, but after a quick sail change, they only lost one boat – Plenty. “Unfortunately, the winner of the pre-worlds event never wins the Worlds,” noted Pre-Worlds winner, Schaefer. “This has been disproven only two or three times in fifteen years, but I promise you that we are working on it.”

Racing continues Sunday, October 7 at noon with similar conditions of 15-20 knots out of the northeast predicted which will be accompanied by 3-5 foot waves.