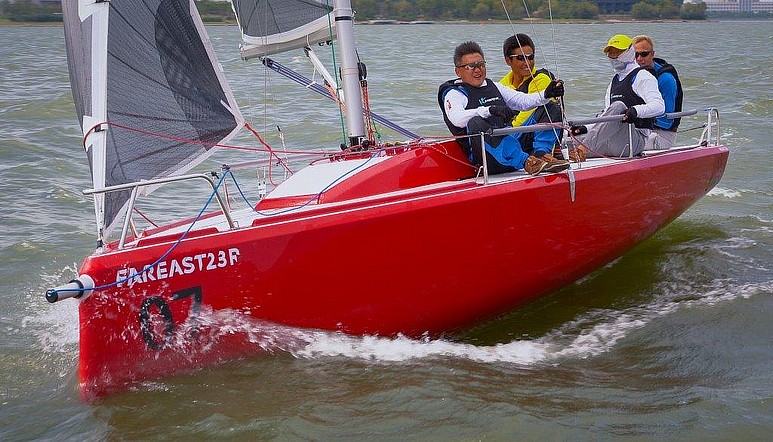 Last year the FAREAST 28R was launched and it sold over 120 boats during the first 12 months. Just recently, the FAREAST 28R received ISAF OD Class status (OneDesign) and the boat was chosen for the Monsoon Cup Regatta, the final leg of the 2015 World Match Racing Tour.

Now, the company introduces the new FAREAST 23R, a smaller version of the FAREAST 28R and like it's big sister, a really competitive club racer

Based on the lines of the FAREAST28R, the FAREAST 23R is just a bit smaller and therefore easier to tow around and launch from a ramp. Fitted with the typical Fareast reverse bow and wide transom, the FAREAST 23R sails easily upwind and can become furious in a good breeze downwind with the centrum fitted bowprit. Speeds in the mid teens are no exception at all.

A lot of emphasis has been put in a very efficient deck lay-out so that the boat can be sailed by any sailor. Certainly aimed as a grand-prix boat compared to the competition, but by no means intimidating.

The FAREAST 23R is designed with a generous ballast ratio of 44%. This in combination with the high form stability but low wetted surface, makes the FAREAST 23R a stable but slippery yacht.

The demise of a backstay enables a very modern rig plan with square-top mainsail and big fore triangle, but at the same time no difficult runner lines to be handled in a gybe.

As all models from Fareast Yachts, the FAREAST 23R comes with a vacuum infused hull in sandwich layer, and with well known deck equipment and rig from Selden, Harken and Spinlock. The rudder and lifting keel is made in carbon, and the bulb in lead. The overall weight makes her easy to trailer around at different venues.

For more information go to www.fareastyachts.com.au.