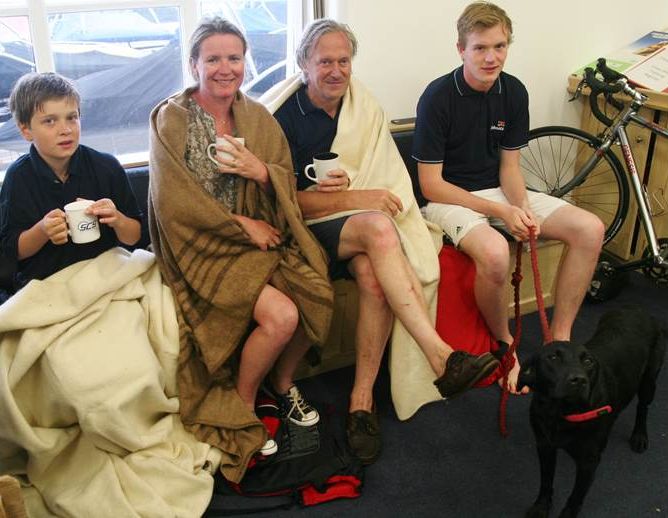 The family who were rescued by the crew (L-R Theo

A family of four and their Labrador dog were rescued last night (Tuesday 25 July) by the volunteer Lyme Regis lifeboat crew, after their yacht was swamped by waves and sank at Charlton Bay, west of Lyme.

The yacht was being sailed from Lyme Regis by Joe Coles, 56, from East Coker, Yeovil. Also on board were his wife Tania, sons Theo, 9, Hector, 19, and their 14 month old Labrador Suki.

Mr Coles said: 'We had been having a picnic and were close to the shore. Suki would not get on the boat. We got out of the boat to get the dog and two big waves hit the yacht and pretty much sank it.'

'We we all safely ashore but wet and cold, and very pleased when we saw the lifeboat. The whole thing was Suki's fault really.'

The family had left Lyme in the 5.5m vessel, called Llewellyn, just as the Red Devils were giving their display as part of the Lyme Regis RNLI Lifeboat Week.

The lifeboat crew brought the family back safely to Lyme Regis. Later it was decided that it was too unsafe to tow the stricken yacht back. The lifeboat crew secured the yacht by anchor a quarter of a mile off Pinhay Bay. This was the 13th shout for the Lyme Regis volunteer crew so far this year.

The lifeboat had launched from the slipway at 6.50pm just as their Lifeboat Week charity auction was under way in the boathouse. Later the water polo match between the lifeboat crew and the lifeguards was affected by a shortage of players. A depleted lifeboat crew team lost by a large margin, according to the players.