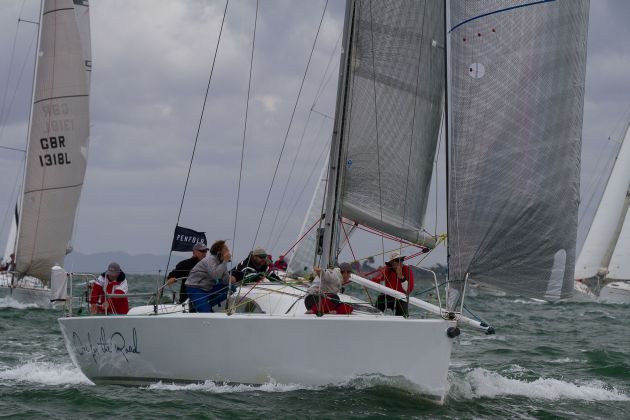 Gary Prestedge’s Archambault 40 One for the Road

Marcus McKay and his son Jai, 18, Marcus’ brother Brent and his two sons, Ollie and Gus, both in their twenties, plus three extras will tackle the 1,064-nautical-mile journey with their Jarkan 12.5, She’s Apples Two. The motivation is simple: to leave the grip of Tasmania’s icy winter behind and head to warmer waters.

“We’ve all sailed various boats but not in a race this big, other than Dave Graney who has logged a circumnavigation in the Clipper Cup,” Marcus said from the Bay of Fires on Tasmania’s north-east tip where he is waiting for a weather window for the Bass Strait crossing and onto Sydney.

When asked whether fathers and sons or uncles and nephews will be on watch together he responded: “We’ll mix up the watches based on who’s good at doing what. In terms of food we’ll take double what we normally would; we aren’t worried if the boat is a couple of kilos heavier.”

She’s Apples Two will stay on in Noumea for the New Caledonia Groupama Race starting June 17 then cruise back to Mackay for Magnetic Island Race Week and finally head home around November.

One for the Road is already in Sydney and Prestedge says they too are looking to escape the southern state in winter. In terms of performance he recognises the Archambaults don’t rate well on handicap. “There’s another Archambault coming from Noumea. If we are up with the other 40-footers we’ll be happy. If we get some lucky breaks that will help but it’s more about the journey, and sailing to another country.”

Instead of the usual eight or nine Rolex Sydney Hobart crew, One For The Road will race with six, including Gary’s son, due to the amount of food and water required for such a distance.

On Thursday May 31 the Bureau of Meteorology will present its official long-range forecast to competitors as part of the host club’s official race briefing. On race day a final weather briefing at 8.30am will arm all navigators with the very latest information before crews head to the start line off Nielsen Park at Vaucluse.

Following a 25-year hiatus a multi-state Australian and New Caledonian fleet of 22 will bring life back to one of Australia’s oldest ocean odysseys. George Snow’s Farr 65 Brindabella set the fastest time of five days, 21 hours and 35 minutes for the 1,064 nautical mile course in 1991, one Snow still holds more than a quarter of a century on.