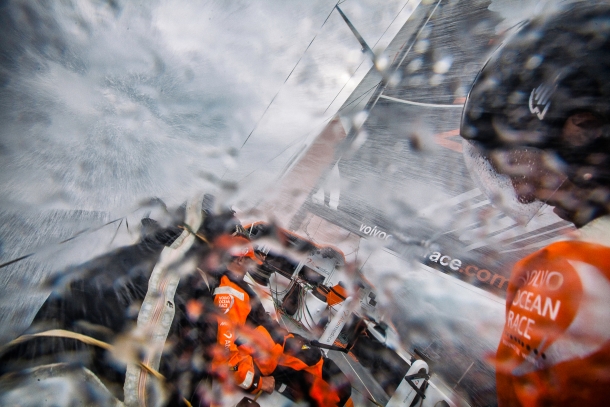 They don’t call it life at the extreme for nothing.

And the first 48 hours of Leg 4 of the Volvo Ocean Race have certainly lived up to that billing, pushing these sailors to their limits – and beyond.

It’s been a difficult adjustment back into offshore living for the six boats, which still have over 4,800nm of their journey from Sanya, China to Auckland, New Zealand to complete.

Huge waves and furious winds in excess of 25 knots have battered, bashed and bruised the fleet as it voyages upwind through the South China Sea towards the Pacific Ocean.

“It’s like rodeo bull riding,” writes Francisco Vignale (ARG), the Onboard Reporter for Spanish boat MAPFRE. “We are still seasick, and trying to switch to sea mode.”

And a lack of sleep since they left the tropical Chinese destination certainly isn’t helping stress levels amongst the sailors.

“No one has caught a good sleep for 48 hours,” blogs Abu Dhabi Ocean Racing Onboard Reporter Matt Knighton (USA).

“With each wave we slam into, anyone asleep slides five inches forwards until their head falls off the pillow and their feet touch the next bulkhead.”

Team Brunel’s Lithuanian sailor Rokas Milevicius was even more frank as he was asked why the crew choose to sleep feet-to-bow by curious Onboard Reporter Stefan Coppers (NED).

“It’s in case we hit something – a whale, a container ship, another boat,” he explained.

“It’s so that you don’t slide forward and smash your head – it’ll break your legs, not your neck.”

Indeed, Dongfeng's Chinese sailor Jiru Yang (Wolf) might be nursing a sore head today after a gigantic wave crashed onto the deck whilst he was grinding, knocking him flying from one side of the boat to the other, where he lay crumpled in confusion.

But despite the odd cut and bruise, he was okay – and he has reason to smile, too.

His team, skippered by Charles Caudrelier (FRA), leads the pack by just 0.4nm at the 1240 UTC position report, with second-placed Abu Dhabi Ocean Racing pushing the French-Chinese team all the way in an exact replica of the Leg 3 finale.

The boats are currently arrowing their way toward the top of the Philippines, where they must leave two waypoints to starboard.

And then, a big decision to make: tack north, towards Taiwan, or sail a more direct, diagonal route down towards the Solomon Islands?

There are pros and cons to both strategies. The former means more miles, but potentially more wind and therefore speed, whilst any navigator choosing the shorter, latter option risks getting caught in light airs.

“Tomorrow we should reach the north of the Philippines, and enter the Pacific Ocean,” says Caudrelier.

“That will be decision time – maybe the decision of this entire leg. For the moment, it’s not at all clear what we should do.”

Dongfeng and Abu Dhabi sit some 5nm ahead of third-placed MAPFRE, but the fleet is still relatively compact as night falls on Day 2 – just 12.8nm separates the leaders from sixth-placed Team SCA.

“To have the fleet so close means that to branch out on your own is a big call,” admits Dee Caffari (GBR) on the all-female boat.

“But to sail to a plan to make the most of the bigger, long-term picture requires nerves of steel.

“Will the fleet go to the Philippines or will we hitch north to Taiwan? Will they come with us if we go? That’s the million dollar question and only time will tell.”