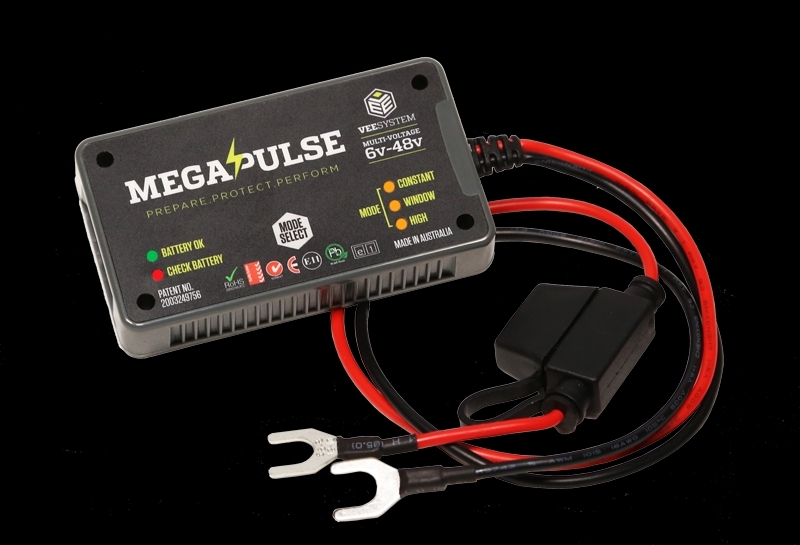 The Megapulse may well be the best product displayed at the recent Sydney International Boat Show last weekend.

Invented by Ross Naddei from VEE Systems, the Megapulse is designed to improve battery longevity by reversing lead sulphate deposits on the cell plates. While it is new to the marine market it is well proven in Volvo and Scania trucks.

Sulphation is the leading cause of battery failure, it is a dense insulating barrier which forms on battery plates during normal battery operation, reducing the battery’s ability to accept and give off power. Ultimately it causes premature failure of the battery and key electrical system components.

Megapulse Green Energy reduces battery internal resistance. The desulfation process rejuvenates batteries by reversing lead sulphate deposits from battery plates. Green Energy induces 5300 pulses per second into the battery in response to the internal resistance of the battery, targeting crystallised lead sulphate, re-energising it and returning it to active duty where it can once again create energy.

Green Energy is suitable for all types of batteries, except lithium and NiCad.

Megapulse Green Energy has been tested and evaluated by leading institutions and companies including CSIRO, Unitech Energy, Volvo, Scania and Mercedes. It is already installed in over 100,000 trucks and other vehicles.

Batteries suffer from self-discharge even when not installed in a yacht, which can totally discharge and damage a fully charged battery within 6 months. When batteries are left in a discharged state, sulphation takes hold and causes premature failure, but when batteries are left for long periods of inactivity, such as over winter, the key-off load of the vehicle is an additional load increasing the overall problem.

Vehicles left in storage for 2 months or more require this solution to avoid battery and vehicle electrical system problems, whereas vehicles that are used at least once a month only need a Megapulse Green Energy device to keep the battery and the Electrical System in like new condition.

Megapulse claim it is safe and effective in:

The patented electronic components are epoxy encapsulated and housed in a compact acid-resistant, hardened polypropylene case. It draws only 10 milliAmp of energy from the battery.

Watch the video to see Ross Naddei explain how it works: