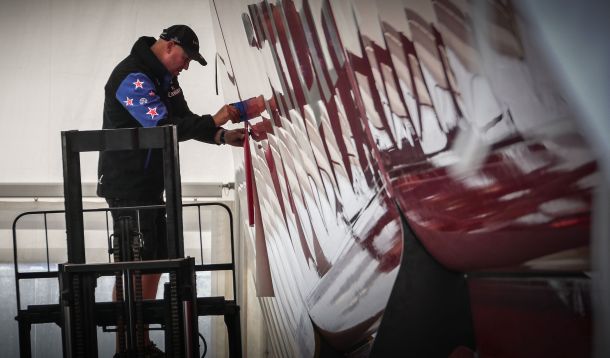 Getting the ETNZ AC45 ready for racing in Sweden. Photo ETNZ.

It has only been a month since Emirates Team New Zealand finished second at the first Louis Vuitton America’s Cup World Series in Portsmouth, but a month long enough for the sailing team to be chomping at the bit to get back out on the red and black AC45 to continue the strong form and momentum illustrated with little more than a hand full of days sailing together.

Gothenburg will provide a new set of challenges for skipper Glenn Ashby and his crew, the same line up from Portsmouth, including Peter Burling, Blair Tuke, Ray Davies and Guy Endean.

Racing will take place at the mouth of the Göta älv river, where currents, quirky breeze, shipping traffic and local intricacies will just add to the challenge of beating the formidable field of teams.

“The guys have been in Gothenburg for a few days setting up the base and putting the boat together so we are looking forward to getting back out on the water again.” said skipper Glenn Ashby, “We had good first event last month so obviously are looking to build on that.

“All the teams are going to be looking to step things up a couple of cogs from Portsmouth so hopefully all the work we have been putting in on crew work and boat handling off the water will amount to better cohesion on the water once we get back out there from tomorrow.”

Each Louis Vuitton World Series events consists of only four scoring races. Two of which on the Sunday are double points races, so maximizing the two practice race days is a vital factor in making a step towards a successful regatta.

“Such a short regatta isn’t really normal in the sport of sailing, but that’s what it is in the America’s Cup now,” explained tactician Ray Davies. “You just have to be consistent from the first gun and make sure you perform when the pressure is on, especially on the Sunday with the double points races. So that will be the real test. I guess the good thing for us is we have a group of guys on our boat who have a tendency to thrive under pressure and deliver when needed.”

This fact was illustrated once again by Pete Burling and Blair Tuke winning their 20th straight 49er regatta at the Olympic Test event in Rio last week.

“That was a big event for us. We put big pressure on ourselves to perform at that event more than any other this year. We actually enjoy that pressure to perform,” said helmsman Burling. 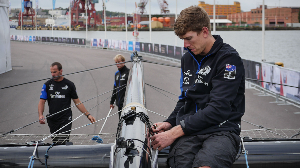 With all the hype and expectation to perform things must be kept in perspective, emphasizes the experienced voice of skipper Glenn Ashby.

“As competitive as we all are, we have to keep our expectations in check. Keep the relentless fires to win at a realistic level. Even after the promising result in Portsmouth, we as a team have still had significant amount less time sailing together than all of the other teams.

“Maybe the raw talent and enthusiasm of our guys got us through in England, but that isn’t going to be enough every time. So we need to keep working hard, building our team work and communication.”

Time will tell, as the clocks tick down to the start of what will be another intriguing regatta in Gothenburg.