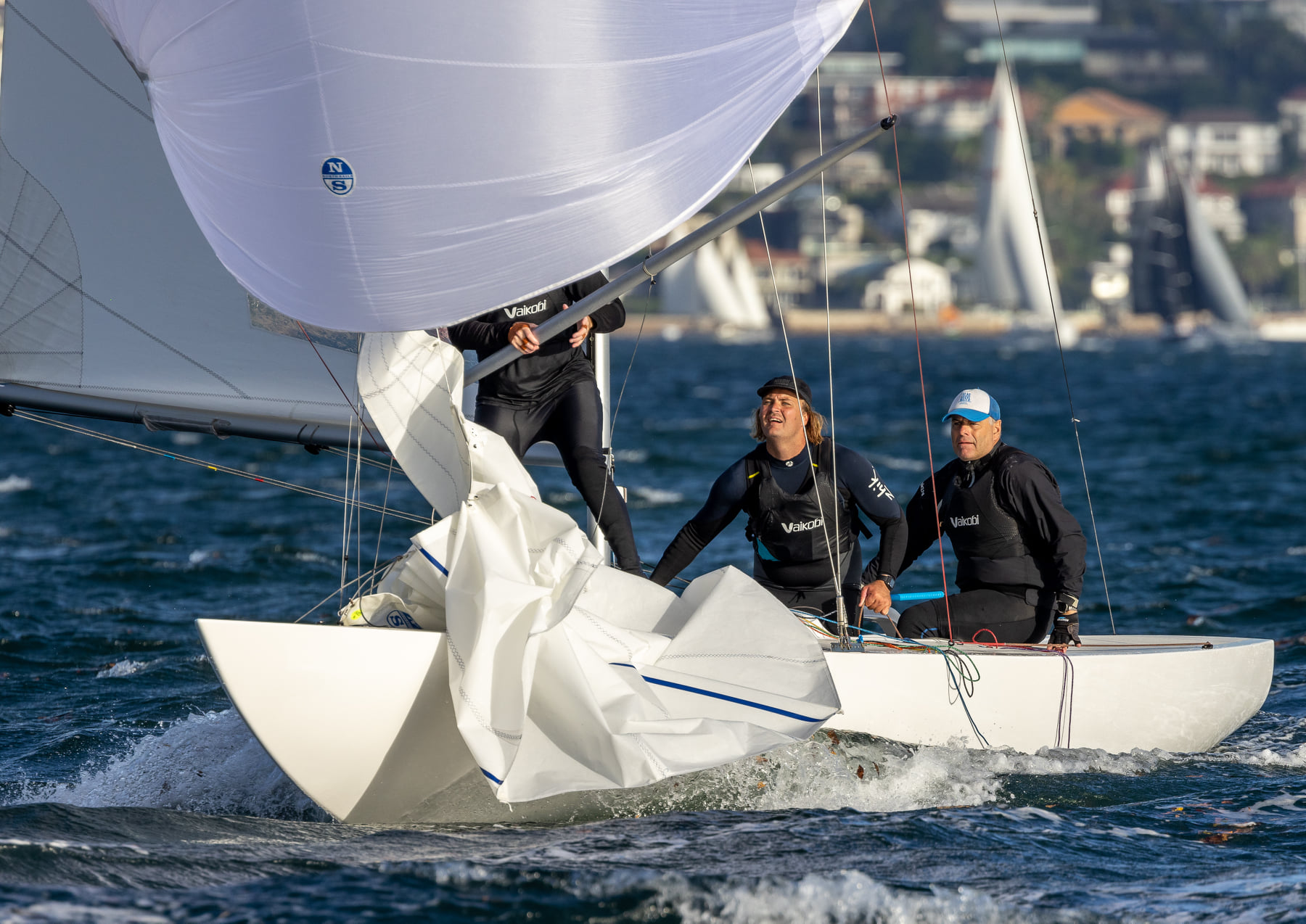 The Etchells NSW Championship will commence tomorrow, Friday 18 February, to be sailed over three days from the Royal Sydney Yacht Squadron (RSYS) with a fleet of 28 boats.

The preview was sailed just two weeks ago, with the Milson Silver Goblets also out of RSYS concluding on 4 February with five evenings of racing. Current national champions, First Tracks AUS1485 skippered by Peter Merrington locked in the win on a countback over JC Strong on Flying High 2 AUS1435 in a strong midweek fleet of 19 boats.

The winner in the Corinthian Division was Dawn Raid AUS1361, owned by Matty Whitnall and Rob Bishop.

“We almost won the first two races back to back but we just messed ourselves up on a lay-line in the first race,” Whitnall said of their great start to the Goblets.

“The breeze was forecast on the second day to go to the north and we hung around on the pin. With twenty seconds to go we tacked back onto port, and we all but laid the top mark in one with building nor’easter.”

The strength of the breeze increased across the week, and Whitnall said the racing remained what can be expected in the Etchells class, “all good and very close”.

“It was a bit windier on Wednesday, and then Thursday was a blowout! 38 knots kept everyone ashore,” Whitnall said.

“On Friday [4 February] with a drop coming in, Peter [Merrington] was going to be the danger. JC was one point ahead of us but we kind of figured that those two are pro-teams, and we were there to win the Corinthians. We had sort of already achieved that before the last day,” he said proudly.

“We could see the Cruising Yacht Club boats in pressure, and went mostly right. We made a fundamental error at the top, and Merrington and Strong got a massive right hander and they were gone. We worked our way back up, but the last one was a bit of a scrappy race for everyone, there was a junior team that got tangled, and a couple of boats wiped out but it was good fun,” Whitnall said.

“I just won the Nationals in Windsurfer One Design, at the end of January, that is my cross training, but the Goblets are my favourite regatta of the year. The harbour is empty, there is always a great fleet, and it’s always warm.”

“The atmosphere of the competitors was really calm, I don’t know if there were any protests, I don’t know of any. The feeling in the class at the moment is just close and fair sailing. Sam Newton, Doug McGain, Belcher, all of the pros, from lots of other classes were there and we got to race against them,” he commented.

“I’ve got a boat that I’m a co-owner with, we put in 17.5K each. 2008 our boat was built, and it’s perfectly competitive. Anyone could do the same and come and race against the greats and potentially do what we did,” Whitnall said of the Etchells class.

Whitnall continued, “There was the possibility of doing the club race on the weekend following the Goblets, then a mini regatta last week, then the NSW Championship this weekend, that’s twenty races in under a month against all these great sailors.”

Speaking of great sailors, Christian Brook, the Commodore of the Royal Sydney Yacht Squadron was a competitor at the Milson Silver Goblets, and will also line up for the Etchells NSW Championship from tomorrow out of his home club.

“I was super happy with the Goblets, it went really well,” commented Brook. “There were some tricky courses that challenged the fleet, and we lost one out of five days due to the weather, but it was a great call by race officer Ian Kingsford Smith.

“The Etchells are a prestigious class and the Milson Silver Goblets is a prestigious regatta, so not surprisingly both are entwined with the history of our club. The format is excellent, twilight racing suits many of our members and visitors, and the bonus was it also served as a test run for the NSW Etchells  Championship which kick-off tomorrow.

“The cream really rose to the top at the Milson Goblets, and it was fitting to see Peter Merrington and his team take the win after a few near-misses,” the Commodore concluded.

Current national champion, Peter Merrington said of the win ahead of the NSW Championships, “First thing was that unfortunately Mothy couldn’t come back so we had to do it without our spiritual leader, so we had Will Parker, but Mothy is back for the States this weekend.

“First race of the Milson Goblets we had a bit of a shocker, then we got a black flag… Not a good start, but the boys did a really good job picking the beats on the last two days in the breeze. That southerly track that starts at the zoo [Taronga Zoo] and goes up to Rushcutters Bay is really tricky, you have to have your wits about you.

“Three other boats sailed really well as well, Martin Hill, JC Strong, and Rob Bishop. It was a really strong regatta to preview the next few weeks of racing.”

The NSW Championship is this weekend, and the National Championship will be sailed out of Metung Yacht Club from 2-6 March 2022.

“We knew what we had to do at the end, we did a lot of work on the countback and where we had to finish compared to JC and her team,” Merrington said.

On JC Strong who led for most of the regatta, Merrington stated: “She’s the best, and they are our training partners, so it’s nice to beat them, but we do a lot of work with them and look forward to the next match-up this weekend.

“For the Goblets, it was great to see such a great fleet out during the week, 19 boats is a great effort, and we look forward to an even bigger fleet this weekend for our States. There are quite a few inter-staters and the fleet is close to 30 boats which will be a great test.”

For the full results from the Milson Silver Goblets, see: https://app.sailsys.com.au/club/2/results/series/1531/pointscore?handicap=s