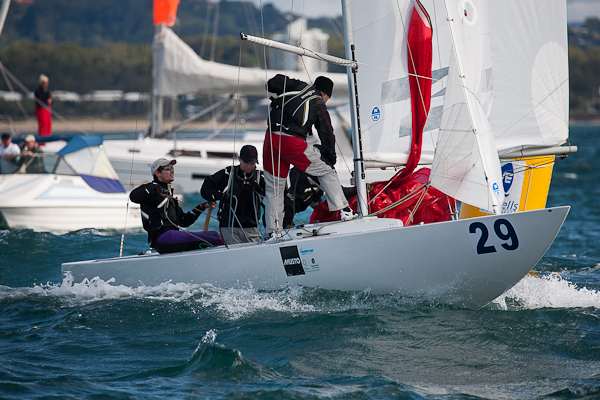 For some this year’s Australasians is a great opportunity to get back into the class in time for the 20th anniversary of the annual regatta while for others it’s forming new partnerships to ensure participation in a favoured event.

Mooloolaba’s David Turton hasn’t raced an Etchells since the 2012 championship when he was still campaigning Harold Holt (921). Prior to that he was a regular competitor in the class, starting when he was about 19 years old. Big boat racing in Australia and overseas, plus pursuing a passion for Marblehead and International One Metre radio-controlled yachts has distracted him from the Etchells, until now. Turton has purchased hull number 885 out of the Brisbane Fleet.

He’s looking forward to having some good racing with his latest acquisition. “I’m not aiming to set any records or win any titles, it’s just to get out there and have a blast,” Turton said. “Returning to the Etchells is because the best people sail them,” he added.

Turton is still sorting out his crew with one “little bloke” crew of about 80kgs almost locked in and another one to be found. And he admits he needs to do some work on his fitness so that he can survive three consecutive days of Etchells racing.

After the Mooloolaba championship Turton will head off to Spain for the IOM European Championships and then return in time to campaign his boat out of Brisbane and towards the 2018 Etchells World Championship.

For North Sails’ Michael Coxon, joining good friend, but former foe, Tom King and his long-standing crew of David Edwards and Ivan Wheen, is a unique experience. “I have always raced against, never with him, but I have done a lot of sail testing with him,” Coxon said of the Royal Sydney Yacht Squadron team.

“We used to have two boats that were very, very similar. He had 925 and I had 940.  They had the same masts. We used to always go out and test against each other.”

Both the old boats are sold and now Coxon and King are looking to purchase new ones from the Australian mould. “Tom has got all the parts lying in his crew, David Edward’s living room. He has all the fittings for an Etchells laid out ready to go, waiting to have the all-clear to place an order for a new boat,” Coxon said.

In the meantime, King, Coxon and team will race Richard Hammond’s boat Alchemist, 1401, which was built from the new mould.

Coxon, who says he is on a diet pre-championship, isn’t sure what position he will be assigned for the championship, but he does know he will be helping to make-up the total crew weight. “They are a world champion crew, so I said I would fit in wherever I can be of assistance,” Coxon said.

Coxon will also be using the regatta to continue the North Sails development program and helping King to get his head back around the intricacies of the Etchells after being out of the class for two years.

Back onshore former class competitor Ken Down will be assisting the organising committee in the role of prize-giving MC. John Charlson was the first, and Down the second member of the original Mooloolaba fleet with his Etchells, Forceful, when it was formed 20 years ago. He last raced an Etchells, 1213, in 2004, but he still has in pride of place in his architectural business office a very large photo of his Etchells.

Down is doing much less competitive racing and far more work these days. “I miss the competitive sailing, but work is keeping me occupied at the moment,” Down said. “I have spent so much money on yachts, I now have to work a long time to pay it all back,” he joked.

“The Etchells is still the best racing you can get,” Down added.