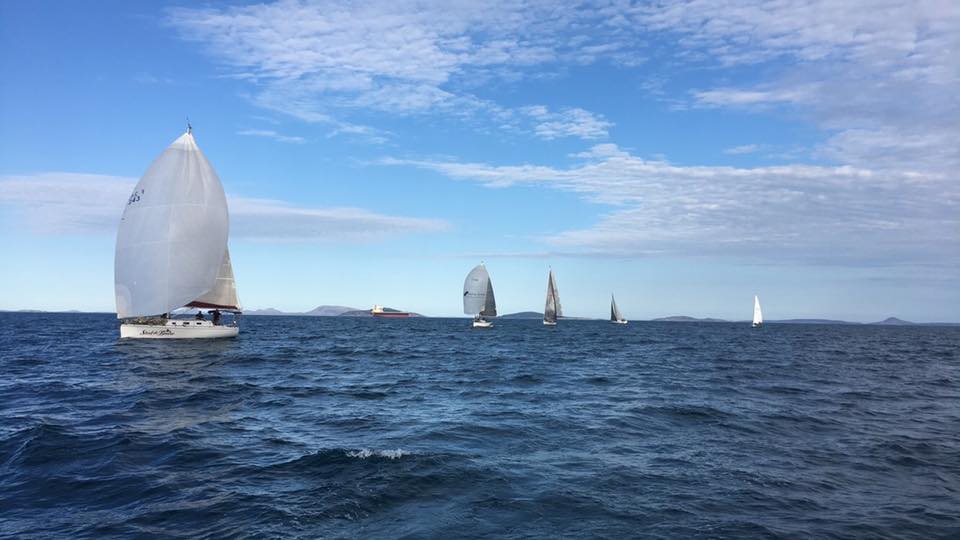 The Esperance Bay Yacht Club's 2016/2017 Harold Browning Memorial Remark Island Race, at 38nm, is the longest event on the club's calendar and involves a picturesque sail through the Recherche Archipelago.

The start was recorded by Wells Photography and highlights the beautiful Esperance Bay. The lack of wind made it a challenging start as yachts drifted towards the start line.

The club provided this report, by Priscilla Davies:

The Harold Browning Memorial Remark Island Race is the most prestigious race of the Esperance Bay Yacht Club season. In the weeks leading up to the race new sails are purchased and ‘racing sails’ are rested, handicaps are scrutinised, crews are in the water cleaning boats and any unnecessary weight is removed (champagne, water, wives etc).

There are 10 yachts in the Esperance fleet with nine on the water for the 2017 Remark Island Race. The majority of the fleet race every week and a friendly, yet competitive spirit resonates throughout the cruiser division. A new boat to the club this year was unable to notch up enough races to be eligible to win the Remark (no live handicap), however Steel de Breeze (Robbie Johnston) was a chance to be one of the quickest boats on the water. Steel de Breeze was the vessel of choice for two of the Browning family, sponsors for the big race.

Commodore Tim Stewart ran a Calcutta on the eve of the race and the banter and predictions made were strong indications of the passion and pride felt when the Remark Race is involved. It soon became apparent that there were several favourites to take out the title with wile-e-coyote (Jim Bridge), Jucasta II (Stu McIntyre) and Timora (Kevin Hall) leading the list for handicap honours. Wile-e-coyote featured again as one of the favourites for fastest along with Toybox and Steel de Breeze.

All weather sites were being heavily scrutinised leading up to the race as skippers planned how to gain the advantage. However nothing prepared the crews as they walked down the marina to the boats on race morning. Esperance Bay was a complete glass off with not a breath of wind to be found. The skippers spent time motoring around the bay during the prestart looking for wind to determine what would give them the winning start.

There was talk of changing the start time due to the lack of wind. This was not ideal as one of the defining factors is the mileage involved, delaying the start would mean shortening the distance. At 8.45am, 15minutes before the gun, the start team asked the Commodore if the start should progress. At the time 5 knot ‘gusts’ were enough to convince everyone it was time to go. Unfortunately at 8.55am our gauges were reading at consistently under 1knot. The most coveted race of the year started with boats drifting aimlessly towards the start line. At one stage we even contemplated boiling the kettle….

The first two hours didn’t see the wind pick up. Skippers were busy discussing tactics while being concerned about not getting back to the marina before dark. Wile-e-coyote and Toybox seemed to find more breeze than the rest of the fleet and slowly edged away to what was to become an insurmountable breakaway.

The 38nm race was definitely a challenge from the start and when the wind finally picked up it favoured some competitors more than others. Some skippers headed further along the coast only to find a hole, while those who chanced a tack were able to find a little more breeze. The back of Remark Island was sloppy and did see a couple of boats run into some challenges with their kites up. The long stretch home turned into a fantastic spinnaker run and was significantly shorter than the trip out there.

Wile-e-coyote (Jim Bridge) took line honours just 38 seconds ahead of Toybox (Brian Kerr) after 6 and half hours of racing and some fantastic sailing by both boats. Anger Management and Jucasta II had their own race for third and fourth with only 13 seconds separating them over the line.

A few skippers waited anxiously for the results with handicaps determining the eventual winner. Congratulations to Jim Bridge and the crew of wile-e-coyote who were eventually awarded the trophy. Jim has been a member of the EBYC since sailing as a junior and started racing his own boat, wile-e-coyote, in the 2014/15 sailing season. This is his first Remark Island Race Trophy and a win that many skippers, with many more years on clock, are yet to attain.

It was a great day to be out on the water, with the lack of wind providing a more unique challenge for the Esperance skippers. A huge thank you to our volunteers on the start team. If you are ever down Esperance way, call into the EBYC, we are always keen for a chat about sailing.

Editor's Note: I entered my 37ft Van de Stadt in the Remark Race in 2009 while passing through Esperance. (I had planned to stay three days on my way east, but ended up there for five months.)

The conditions were similar to those depicted in the video – an absolute drifter. About an hour after the gun, and still within sight of the start line, an “all yachts” call was made from Zero White's Adams 42 Rosie: “All yachts, all yachts this is Rosie. We are experiencing difficulties with our eski lid and are pulling into Gull (anchorage) for repairs.”

As the closest boat to the yacht in distress, we immediately went to her aid. Although we managed to get the eski lid to open and close effortlessly (and frequently) we were unable to complete the course. Our request for redress was declined.